Clearing Up the Fall Turnover

That murky water tells you it's time to change techniques. 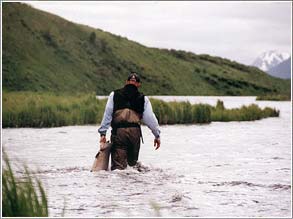 In my earlier life as a fisheries biologist, the question most often posed to me was: “When is my lake going to turn over?” I’d ask some questions about the depth and location of the lake, but then the caller would invariably interrupt me with a comment like, “I thought lakes were supposed to turn over at 58 degrees.” Anglers are interested in lake turnover because they know it can foul up fishing. But from what I’ve seen, the mechanics of the turnover process and exactly how it affects fish might be the least understood aspect of freshwater fishing. Here’s a simple definition: Turnover is the period of time when the lake is circulating from top to bottom and the water temperature is uniform throughout. Okay, so there’s a little more to it than that. Before you can understand the turnover phenomenon and what it does to fishing, you need to know about some of the unique physical properties of water.

Water is densest at a temperature of 39.2Â¿Â¿F. As water gets warmer-or colder-it becomes less dense. Because of this difference in density, most lakes stratify into distinct temperature zones (see illustration) and layers. With these properties in mind, the mechanics of the turnover become a lot less murky. The temperature layers remain intact through the summer as long as the air temperature is warm enough to keep the surface water several degrees warmer than the water in the depths. But when the air temperature cools enough that the upper layer of water reaches the same temperature as the depths, the fall turnover begins. That’s because all of the water in the lake is now at the same temperature and density, so the wind can circulate the entire mass. As the surface continues to cool, the water in the top layer becomes more dense than that in the depths, so it sinks, which further accelerates the overall mixing process.

In answer to all those questions about “when will my lake turn over,” it’s easy to see why the fall turnover takes place at different times in different lakes. For example, a deep lake turns over later in fall than a nearby shallow lake because the water in its depths is colder, therefore more time is needed for the surface water to reach the same temperature. And a shallow, dishpan-shaped lake may never stratify or turn over, because the wind keeps the water circulating all the time.

There is another annual turnover that occurs soon after ice-out that mirrors the fall turnover. It occurs in spring, when the surface warms to the same temperature as the depths. But the spring turnover is of short duration and has much less effect on fishing. Turnover not only removes temperature barriers; it eliminates oxygen barriers as well. After a lake stratifies in early summer and water in the depths no longer mixes, a stagnation process begins. Decaying organic material on the lake bottom, along with living organisms in the water, consumes the dissolved oxygen. With no circulation to restore it and no aquatic plants to produce it, oxygen levels in the hypolimnion layer decline.

** Recognizing Turnover **
The surest way to determine if a lake is turning over is to check its temperature with an electric thermometer. When the turnover is in progress, the entire water column will be at the same temperature, give or take a degree or two. If you don’t have a depth-reading electric thermometer, here are some other clues:
A sudden decrease in water clarity. Water circulation puts particles of silt and clay into suspension, so the water often looks “dirty” during turnover. Clumps of decaying organic matter on the surface. The circulating action of the turnover causes material to break loose from the bottom. Sometimes you’ll see large mats of brownish glop floating everywhere. Baitfish distributed throughout the water column. Run a sensitive fish finder over deep water. When you see temperature-sensitive baitfish scattered at all depths it’s a pretty sure bet that the turnover is under way. Some fishermen claim they notice an odor to the water when a lake turns over, but I can’t confirm this. My sniffer is barely able to pick up the smell of a T-bone on a grill.

Now that we’ve gotten you an “A” on your science term paper, it’s time to go fishing. First, the bad news. Because the turnover evens out the water temperature and restores oxygen to the depths, it creates habitat that was not previously hospitable to gamefish. Summer’s low oxygen levels in the depths confine fish to a relatively shallow depth range above, or within, the thermocline. During the turnover, however, the fish can survive at practically any depth, so your odds of finding them have gotten longer. More bad news. Most anglers seem to think that turnover lasts only a few days and, once it’s over, fishing gets back to normal. Not so, according to University of Minnesota limnology professor Dr. Robert Megard. “The turnover lasts as long as the lake is cooling,” Megard says. “For all practical purposes, turnover continues until freeze-up.”

Now, finally, the good news. Gamefish are concentrated more tightly during the turnover period than at any other time of the year. In summer, you’ll find fish scattered over large flats, cruising the weed lines or even chasing baitfish in open water. But in fall, clumps of fish hold in very distinct locations. Most fish favor sharp-breaking structure, so even if they’re resting in deep water and feeding in much shallower water, they’re not moving far. And often you’ll find many different kinds of fish concentrated in the same area. One of my favorite lakes has a rock pile that tops out at 35 feet. Fishing around it in the fall at depths of 40 to 55 feet, I commonly catch walleyes and northern pike, with a few bonus smallmouth bass and slab crappies. And once the fish “set up” in their late-fall locations, they’re likely to stay there until freeze-up.

I rely heavily on electronics to find fish all year, but I spend even more time graphing during the turnover. I’ll cruise around and check out every nook and cranny of a particular piece of structure. If you aren’t meticulous in your coverage, you could easily miss a tight school, meaning the difference between a bad day and a terrific one. What confuses many anglers during the turnover is that completely different fishing techniques may be equally productive on the same lake. It’s not unusual to hear about someone catching a bunch of nice bass by casting spinnerbaits on a shallow weedy point, while at the same time someone else is hauling them in by jigging in deep water.

What’s also confusing is that the fall pattern on a murky lake may be completely different than that on a clear one, even if the two are similar in depth. Fish in low-clarity lakes are not likely to go deep at turnover time, probably because they cannot see well enough to feed. In clearwater lakes, however, there is practically no limit to how deep they will go. To most fishermen, turnover is a dirty word. They’ve been conditioned to believe that catching fish is almost impossible when the turnover is in progress.

My advice: Quit worrying and fish a little smarter. in low-clarity lakes are not likely to go deep at turnover time, probably because they cannot see well enough to feed. In clearwater lakes, however, there is practically no limit to how deep they will go. To most fishermen, turnover is a dirty word. They’ve been conditioned to believe that catching fish is almost impossible when the turnover is in progress.

My advice: Quit worrying and fish a little smarter.