Some notes on the trouble with tackle. 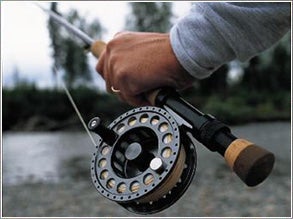 Modern fishing reels are wonderful toolsÂ¿Â¿to a point. And that point might come when you try to puzzle out the workings of a spincasting reel that came with no directions. Or you might discover that the high-fashion design of your spinning reel can actually mean diminished function. Or you could be like the guy I met on a rocky jetty recently, who had just dropped a $400 fly reel on the rocks. The fragile reel frame was bent beyond repair, and the guy was left muttering something about how he had never lost so much so fast beforeÂ¿Â¿even in Vegas. Your choice of a new reel doesn’t have to be a gamble, of course, but there are a few generally ignored problems that should be understood. Here’s a short collection of reel gripes that you might want to keep in mind.

** Spinning Reels **
Until Daiwa came out with skirted-spool spinning reels in the early 1980s, all spinning reels featured a spool nestled inside a rotating cup that also carried the bail mechanism. Newer skirted spools eliminated the cup and extended down over the upper part of the reel body. Supposedly this helped reduce line tangles, and soon all makers switched to this design. But something was lost in the translation. Specifically, casting distance. That’s because the spool diameter of almost all skirted spools is less than the old-style counterparts of comparable overall size. Other things being equal, you’ll get greater casting distance from a reel with a large-diameter spool. And having fished the older reel designs for about 20 years pre-skirt, I never found tangling to be that much of a problem in the first place.
So when distance is a consideration, I still use an old-style reel. These types of reels are less common now, but contemporary versions include the high-end reels made by Van Staal, a few still imported 300-series Mitchells, and the Penn 700 series spinning reels, which are an excellent value. Distance casting usually isn’t a consideration in bass fishing, of course, which is partly why skirted-spool reels remain so popular. But there’s some logic in favor of the old-style reels here, too. A number of bass fishermen, for example, are experimenting by flipping and pitching lures with spinning tackle instead of the baitcasting gear with which these heavy-line techniques were originally developed. In this case, larger-diameter spinning-reel spools are a big plus, better able to handle lines of 17-pound-test and greater.

** Spincasting Reels **
This could be the dumbest thing I’ve ever seen in the marketing of fishing tackle. I wanted to fool around with some spincasting reels, so I went to my local chain¿¿¿discount store and bought two different models off the rack. They were less than $15 each, the kind of thing some doting and nonfishing relative might buy as a present for a kid. Unwrapped at home, neither reel included any directions. No parts list. No suggestions or ffishing tips. Nothing. One reel had an unusual three-position anti-reverse switch (most are two-position) that I still haven’t figured out. The spool cover on the other one was jammed on so tightly that I eventually took it off with a small pipe wrench.
So that’s what I get for buying cheap tackle? Maybe. But novices buy¿¿or are given¿¿lots of inexpensive reels. And novices need lots of direction and encouragement. They are, after all, the future of fishing. So wouldn’t you think a reel manufacturer would include some directions, advice, and tips? Maybe even a few discount coupons for additional tackle? Wake up, guys. Those low-end reels just could be your most important product.

** Fly Reels **
This one is mostly the fault of the late Lee Wulff. Back in the 1950s he worked out what’s come to be the modern palming-rim fly-reel design. It was then made by Farlow’s in England as the Lee Wulff Ultimate, now a collector’s item. The design was widely copied and has become nearly ubiquitous. But there’s a problem here, too. The exposed flange or palming-rim portion of the line spool revolves slightly outside of the reel frame itself under very tight mechanical tolerances. That means it’s extremely vulnerable to damage, unlike older-style reels in which the entire spool revolves in¿¿and is protected by¿¿a cagelike frame. If you drop a palming-rim reel and it lands on the spool edge, it’s often dead meat. The bent spool flange is usually beyond repair.
Most fly anglers don’t need a palming rim as a means of adding supplemental drag. Even the most basic click-and-pawl drag is more than ample for most trout fishing, for example. And there are a few alternatives. A rugged spool-within-a-cage Medalist reel can still be had for about $35. And for trout, I usually use old-style Hardy models (Princess, LRH) that are almost as ancient as I am. I do use lots of high-tech palming-rim reels, too¿¿all the while trying not to drop one. But there’s usually a rugged old Medalist in my tackle bag as a backup.