Top trout tactics for the flyrodder. 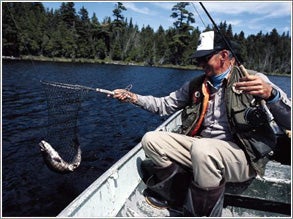 Trout outsmart me regularly.
This neither surprises nor embarrasses me. Sure, a trout’s brain is about the size of a pea. But it’s a highly specialized organ devoid of the kind of arcane clutter that fills our brains-stuff such as the Prologue to The Canterbury Tales, the periodic table of elements, or the Preamble to the Constitution. The sole function of a trout’s brain is to enable its owner to eat, avoid predators, and reproduce-in other words, to survive.

And in this department, they are masters. In addition, trout are fast learners. The growing number of skilled and well-equipped fishermen who crowd our best rivers and release the fish they catch are teaching generations of trout new survival skills. As a result, trout in hard-fished water sometimes seem impossible to catch. What I’ve learned is that smart flyfishermen continue to add to their repertoire of skills. If you fish for trout one way only, you’ll soon be run off the water. So, here are 10 tried-and-true trout tips that will help you fool today’s smart trout.

1. Get close but avoid detection.
In heavily fished waters, trout may not spook wildly at the sight of an angler. They may not even stop feeding entirely. But they do become extra cautious. Stalk your trout carefully. Wear drab clothing. Move slowly, keep a low profile, and hold the rod low and parallel to the water. False cast away from a target trout so that it won’t see the flash or the shadow of the line. And because smart trout do not expend energy moving large distances for food, creep close enough to make precise casts, even if it means knee-walking on the riverbottom.

2. Study feeding behavior.
There are several stages of an insect hatch, plus transitional periods in between. Educated trout tend to concentrate on one specific stage. Fully hatched duns may be riding downstream on their tiptoes and trout may be rising. That doesn’t necessarily mean the fish are eating those duns.

Analyze all the evidence before you tie on a fly and begin casting. Is your target trout splashing violently on the surface at lively duns? Or is it sipping daintily at helpless cripples and stillborns? (Imitations with trailing shucks of yarn or marabou instead of tails, fished low on the water, often take such trout when standard imitations fail.) Does its nose break the water’s surface, leaving a bubble behind? (That is a sure indication that the trout is eating something off the top.) Or is the dorsal fin or tail leaving a visible disturbance, while it grabs a nymph or emerger underneath? Such clues tell you which fly to tie on and at which depth to fish it.

3. Give the fly the right “action.”
Most insects do not drift lifelessly in the currents. Mayfly nymphs and caddisfly and midge pupae swim to the water’s surface, and emergers wiggle and twitch as they climb out of their shucks. Adult insects often flutter and skitter as they try to get airborne. Smart trout often key on this behavior. Observe closely to know when you must impart lifelike action to the fly. Cast down-and-across-stream to keep direct contact with the fly, and lift, drop, and twitch the rod to imitate the behavior of the insects.

4. Give the fish something they don’t expect.
Sometimes you can’t match the insect the trout are eating. Other times, the hatch is so prolific that your fly is lost among the thousands of naturals on the water. You can solve this problem by tying on something that does not attempt to match the hatch, but that looks edible and familiar nonetheless. Terrestrial patterns often work. During a frustrating hatch, try a beetle, ant, cricket, grasshopper, inchworm, or cicada (depending on what the trout are accustomed to seeing). Sometimes a big Woolly Bugger dragged past the nose of a mayfly-sipping trout will bring a violent strike.

5. Don’t be afraid to change fliees.
Most fishermen believe that the shape and size of a fly are more important than the color. But you can give yourself an edge by matching the insect’s color, too. And when a trout ignores a well-presented fly two or three times, don’t hesitate to try another pattern; the subtle variations in a fly’s design or color that may seem insignificant to you can make all the difference to a trout.

6. Try a nymph anytime.
Even after trout have clearly begun to eat insects off the surface, they usually continue to feed on nymphs. Furthermore, they are somewhat less selective and wary when feeding subsurface than when they must expose themselves to pick an insect off the top of the water. For these reasons, try fishing a nymph just an inch or so under the surface through the entire cycle of a hatch.

7. Mutilate your fly.
Flyfishermen have often marveled at the strange effectiveness of scraggly, bedraggled flies. The reason is simple: Trout often key on scraggly, bedraggled insects-cripples, stillborns, and dead spinners-because they are easier to capture. When trout refuse standard imitations, take your fly to the barber. Slice the hackle of a dry fly at an angle to make it ride low and on its side, cut off the tail to make its abdomen sink, remove one wing, or cut them both to stubs to imitate an insect stuck in its nymphal shuck.

8. Anticipate the hatch.
Smart trout are easier to fool when they’re feeding actively. On most fertile trout streams, insects begin to hatch at predictable times-as a general rule during the most pleasant part of the day. Early- and late-season mayflies tend to appear in the early afternoon, for example, while in midsummer they usually hatch at dawn and dusk. So, stake out a favorite pool an hour or so before the duns appear on the surface of the water. Trout begin feeding selectively on nymphs as they rise from the bottom. If you know what species to expect, you can tie on an accurate nymph imitation and take fish.

9. Fish at night.
Smart trout abandon some of their caution after dark. They emerge from hiding and go hunting for an easy meal. At this time they will strike the same bushy dry flies and fat streamers that send them scurrying for cover in daylight. Precise imitation and delicate presentation are less important at night, when even big, smart trout become more aggressive and impulsive.

10. Avoid drag.
Trout will rarely take an imitation if the pull of the currents on the leader causes the fly to float unnaturally. Sometimes drag is so subtle that you cannot see it, which leads you to believe-erroneously-that you’ve tied on the wrong fly. You can prevent drag by using long, fine tippets and making casts that create curves and wiggles in the line and leader. Practice “crooked casts”-the reach and puddle as well as left and right curves-and use them to neutralize the tug of currents on the fly.

For precise, drag-free presentations, take a position upstream and to the side of the target trout. Cast beyond and to the side of the fish’s feeding station, then raise the rod and skate the fly until it sits directly upstream of the trout. Now lower the rod, which allows the fly to drift perfectly drag-free to the trout. This presentation also allows the fly to arrive before the leader, critical when fishing over really spooky trout.