Bass Against the Wall 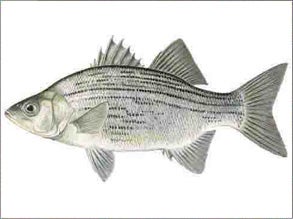 Sheer, rocky banks add character to any lake, and they attract bass for a variety of reasons. Often rocky walls have been carved by creeks or rivers over aeons, and these underwater highways bring in a constant flow of bass throughout the year. Largemouth, smallmouth, and spotted bass move up and down on steep banks with little effort when prowling for food. And below the waterline the walls generally afford bass the same ambush sites you see above the surface: stair-step ledges, dark crevices, jutting points, rock piles, and boulders. But while most anglers recognize these obvious bass magnets, few employ the variety of lures and thoughtful presentations needed to consistently catch fish from steep banks.

** Location Is Everything **
Because bass often hug the wall and won’t move far to take a lure, boat positioning is critical. For example, when you cast straight to the bank, as most anglers do, your lure quickly moves away from bass holding tight to the wall. Even sinking lures, such as plastic worms and jigs, swing away from the bank as they fall. You can more easily scrape steep banks with your lures by moving close to the shoreline and casting ahead of the boat. A good rule of thumb is to move the boat along the wall over water that is slightly deeper than you intend to fish.

Say, for example, you want to hop a jig down to a depth of 25 feet. Move in until your boat is over 30 feet of water and make quartering casts to the bank. If the wall plummets sharply into the depths, you may be only 20 feet or so away from the shoreline. This simple strategy works well regardless of the lure, be it a topwater plug, jerkbait, spinnerbait, diving crankbait, jig, or some type of soft-plastic offering. Any of these lures may coax strikes.

Bass on steep banks aren’t necessarily deep. In fact, not all productive vertical banks drop into deep water. An abrupt shoreline that bottoms out at 10 feet may be hot if other banks in the area feature gently sloping bottoms. In some instances, it pays to move your boat as close to the bank as you dare and run a spinnerbait or buzzbait within a foot of the shoreline throughout the retrieve. This rarely used approach lets you efficiently show a lure to every bass feeding close to the bank.

** Hit the Wall Head-On **
There are times, however, when you should cast straight to steep banks. A perpendicular cast will put your lure deep into rocky crevices and the crotches of fallen trees. When fishing a sinking lure in this fashion, strip line off your reel as the lure falls so that it drops straight down to the bass. Spinning tackle is especially suitable for a vertical fall. Leave the bail open after the cast, and then rip the rod up and slowly lower it to give the lure several feet of slack line.

You should also employ a perpendicular cast when bass suspend beneath schools of baitfish over deep water adjacent to steep banks. This commonly occurs when wind and waves pummel the shoreline; the water movement pushes in plankton that attracts baitfish and, consequently, bass. Position your boat away from the bank, and make long casts toward shore. A 1Â¿Â¿2- to 1-ounce spinnerbait sporting a big, willow-leaf blade works well in this instance. Slow to moderate reetrieves that bring the spinnerbait through the baitfish generally work best, though a brisk pace is sometimes warranted. Bass cruising the open water mistake the flashing blade for the forage on which they are feeding. This pattern typically pays off in clear water, as bass in murky water tend to stick close to the bank.

When a bluff wall leads to the mouth of a cove or bay, it often ends in an underwater point. Never overlook such spots. Bass moving back and forth between steep banks and embayments frequently stop and feed on bluff points. Fish such points from every angle. Start close to the wall and cast over the point into the bay. Then continue working around the point until you end up inside the bay, casting out over the point to deep water. Bass often favor one retrieve angle over others.