Down on the (Fish) Farm

Without this booming industry, fishing as we know it today wouldn't exist. But is it all good news? 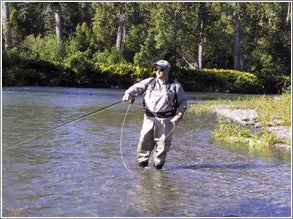 Mention the term “aquaculture” to people and you may well receive a blank stare. The fact is, though, that aquaculture — raising fish and other aquatic products — is big business. It’s also one that has benefited anglers by taking fishing pressure off populations of wild fish and by supplementing existing populations through stocking. Yet these benefits may come with a high price tag. Aquaculture can harm the environment. That’s why the Environmental Protection Agency (EPA) recently began a study to determine aquaculture’s potential impacts on our fish, water, and wildlife.

The U.S. Department of Agriculture calls aquaculture the fastest growing segment of the agriculture industry, increasing between 5 and 10 percent annually. In the United States in 1980, aquaculture produced 203 million pounds of commodities; a decade later, this quadrupled to 860 million pounds, valued at $760 million. A study by Oklahoma State University found that aquaculture was responsible for 181,000 jobs in 1996 and generated $5.6 billion for the U.S. economy.

Aquaculturists raise fish in ponds (some catfish pond systems encompass hundreds of acres), tanks, or runs. When the fish reach the desired size, they are shipped to grocery stores, bait shops, or stocking operations. Clean water is necessary for the industry — yet how pure is the water after the growing process, especially since aquaculture operations are sometimes clustered near a single water source?

Around Idaho’s Middle Snake River, for example, at least 144 trout-rearing facilities raise tens of thousands of fish for human consumption. According to Darren Brandt of the Idaho Division of Environmental Quality, springwater is funneled through trout runs then sluiced into the Middle Snake. By this point, fish feed has added significant amounts of phosphorus (a key element in fertilizer) to the water.

The fish farms are only one of a handful of area sources producing phosphorus, but when all the sources come together, as Brandt says, “You can’t run a jet boat on the river.” Stimulated by the phosphorus, the vegetation is just too thick. Recently, the EPA required these operations to reduce phosphorus discharges by 40 percent.

Disease is another potential problem. In 1995, shrimp farms along the Texas Gulf Coast were hit by the Taura syndrome virus, which killed thousands of farmed shrimp. Biologists and anglers feared the virus might devastate wild shrimp, an important part of the marine food chain. Later tests indicated Taura couldn’t infect wild stocks, says Mike Ray, director of coastal fisheries at the Texas Parks and Wildlife Department. But the larger problem still exists. Raised in 5- to 10-acre ponds holding tens of thousands of them, the shrimp are in “a stressful, feedlot environment of sorts,” Ray says, one ripe for the growth and spread of disease.

The Atlantic Salmon Federation (ASF) believes aquaculture is responsible for the spread of infectious salmon anemia (ISA), a fatal disease, to wild Atlantic salmon. In 1999, ASF researchers at New Brunswick’s Magaguadavic River found that eight of 12 wild fish captured for inspection carried ISA. The disease was discovered in 1996 in salmon-raising pens off New Brunswick. The ASF’s Andrew Goode argues, “This is the first time it’s been documented in North America that this disease was passed on to wild fish” from aquaculture stocks as fish have escaped from the farming operations.

But Joe McGonigle, executive director of the Maine Aquaculture Association, argues that fish diseases tend to move from wild stocks into farmed fish. The research he’s seen indicates that ISA may have originated in New Brunswick wild herring.

The ASF isn’t convinced and continues to monitor Atlantic salmon.

The Wild Side
Atlantic salmon numbers are collapsing due to years of pollutants and overfishing, plus the damming of key gration rivers, not from disease. Still, the ASF and Trout Unlimited (TU) worry that remaining wild fish may interbreed with fish-farm escapees (documented by studies in Norway and Ireland), creating less-than-desirable offspring.

Steve Moyer, vice president of conservation for TU, says, “The genetic effect on wild fish is the big question.” Farmed salmon are bred for fast growth and are docile compared to wild fish. If wild salmon picked up these qualities, unsuitable fish could be created, though McGonigle stresses that research hasn’t proved this.

Marty Jennings heads a walleye stocking study for the Wisconsin Department of Natural Resources. He says the problem might not be genetic inferiority but adaptability issues. Walleyes raised from Minnesota stock, for example, may contain a genetic predisposition toward Minnesota habitat, making them unable to survive elsewhere. The unanswered question: Is this partiality passed on?

Wetland Woes
One smaller-scale practice found in the Upper Midwest is raising fish, especially baitfish, in wetlands. Minnow spawn are placed into a suitable wetland, left to forage, then seined out a few months later.

Studies conducted by Mark Hanson, a wetlands ecologist for the Minnesota Department of Natural Resources, found that these fish strip a wetland of invertebrates, important protein sources for waterfowl, especially ducklings in the first weeks of life. One of Hanson’s studies concluded that mallard ducklings survived at noticeably lower rates when raised in wetlands used for fish rearing.

A Helping Hand
Yet aquaculture has undeniably aided anglers and fish. Consider baitfish. Mike Freeze, a director for the National Aquaculture Association and co-owner of Keo Fish Farm in Keo, Arkansas, notes that Arkansas leads the nation in baitfish production with 30,000 acres of bait ponds. Nearly 85 percent of all farmed baitfish are raised here. But if these millions of fathead minnows, shiners, and chubs weren’t farm raised, they’d be netted out of lakes and rivers, reducing available forage for gamefish.

Ocean fish benefit from aquaculture, too. McGonigle says the Maine Aquaculture Association gives away farm-raised salmon to anglers who catch and release wild salmon. Over 400 fish have been distributed since the program began in the mid-1990s. He also argues that abundant, cheap farm salmon reduces the demand for, and fishing pressure on, wild salmon.

Freeze’s Keo Fish Farm began selling hybrid striped bass (a cross between ocean stripers and freshwater white bass) after Congress banned striped bass fishing on the eastern seaboard in 1983. At the time, 10 to 12 million pounds of stripers were harvested annually, a void the unscrupulous would gladly have filled. However, Freeze says, “Aquaculture took a lot of the profit out of those illegal activities,” when farmers like himself stepped in to produce hybrid stripers for fish markets. Today, wild populations of striped bass have rebounded enough to allow limited commercial fishing.

Stocking Up
U.S. Fish and Wildlife Service programs, in conjunction with the states, helped stock over 160 million fish during fiscal year 1998. Without stocking of this magnitude, it’s doubtful the U.S. would have 35 million anglers today. Mike Freeze notes that while state hatcheries produce many stocked fish, private aquaculture is making huge inroads because it can usually produce fish less expensively.

Consider the Great Lakes region. In 1999, over 25 million fish (predominantly chinook and coho salmon) were stocked here, 11 million in Lake Michigan alone. Before stocking programs began in the mid-1960s, says Dan Thomas of the Great Lakes Sport Fishing Council, recreational fishing was minimal. Today, the Great Lakes provide recreation for over 2 million anglers who spend at least $4 billion annually. “If there weren’t any stocking, you wouldn’t have any fishing,” Thomas flatly states.

Mike Jones, a professor of fisheries and wildlife at Michigan State University, notes that some environmentalists view transplanting Pacific salmon to the Great Lakes as “stocking a misfit fish.” They want native lake trout to regain their place as the Great Lakes’ foremost predator. But in 30 years, Jones notes, biologists haven’t been able to make this happen. Meanwhile, salmon is king in the Great Lakes.

That’s the aquaculture challenge in a nutshell. It can provide enhanced fishing opportunities — but at potential costs to our water, native fish, and wildlife, trade-offs sportsmen need to consider as aquaculture continues its phenomenal growth. weren’t any stocking, you wouldn’t have any fishing,” Thomas flatly states.

Mike Jones, a professor of fisheries and wildlife at Michigan State University, notes that some environmentalists view transplanting Pacific salmon to the Great Lakes as “stocking a misfit fish.” They want native lake trout to regain their place as the Great Lakes’ foremost predator. But in 30 years, Jones notes, biologists haven’t been able to make this happen. Meanwhile, salmon is king in the Great Lakes.

That’s the aquaculture challenge in a nutshell. It can provide enhanced fishing opportunities — but at potential costs to our water, native fish, and wildlife, trade-offs sportsmen need to consider as aquaculture continues its phenomenal growth.