Graceful they're not, but big flies command the attention of big trout. 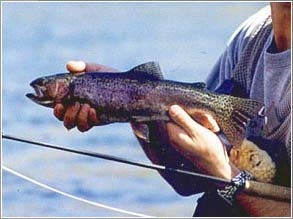 Most trout fishermen learned long ago that the secret to consistently taking big trout is to offer a prime suspect a big meal. After all, these fish are meat-eaters; they don’t like chasing tidbits.

But that knowledge has somehow been lost to many flyfishermen. Tie on a 5-inch-long Woolly Bugger — as I frequently do — and you’ll get the sort of stares usually reserved for the criminally insane. On streams and lakes East to West I’m constantly reminded by other, more “traditional” anglers that big trout will fall for a suitably presented size 20 dry fly.

Yes, they will. But only at certain times of the year or where very specific food chains exist. At any rate, most of the trout taken on the surface rarely exceed 18 inches — and often enough, while you’re fishing for those little guys on the surface, a monster can be wreaking havoc below.

Dry-fly anglers are also limited by weather and river conditions. I’m not. Conditions that can kill dry-fly fishing — such as slightly off-color water, increasing water volume, and heavy wind — are perfect for my type of fishing. A big hatch is also a great opportunity to plumb the depths with an outsized streamer because big fish may move in to eat smaller fish that are sipping surface flies. As a result, I’ve fished with big flies in streams large and small, ranging from a tiny tributary of New York’s Delaware River to Montana’s Yellowstone River, and my collection of large, motley flies never fails to roll at least one considerable trout.

Paying the Price
Let’s define “big trout.” To me, a big trout is a fish that is at least 15 inches long. But size is relative. In a tiny brook a 16-incher is a true trophy; on larger waters I set my sights on fish in the 20-inch class. In my home state of Missouri — and in neighboring Arkansas (home of the world-record brown trout) — the rivers I fish most often will yield 10-pound trout, but only to those anglers willing to pay the price.

Time, not money, is the coin of the realm here. If you want the big boys, you have to stick with the program. That means passing up most of those 8- to 13-inch trout that can be taken all evening on a casually tossed small dry fly. You won’t catch 15 trout in an evening, but after some practice you’ll hook two or three trout — and they’ll all be in the 18- to 22-inch class.

Where and When
Surprisingly, some of the best places to hunt big trout are heavily fished catch-and-release streams where local anglers almost exclusively fish midges. On a branch of Colorado’s South Platte, a guide walked past as I was rigging up one evening. He peered at my heavily weighted 41-inch-long Olive Woolly Bugger and laughed. “Pal, there ain’t no bass in this stream,” he said.

“Well,” he said, “if you’re not fishing a size 20, not much is going to happen.” And with that he laughed again. As he walked away I could hear him tell his client, “That crazy son-of-a-bitch is going to knock himself out cold with that thing.”

Now, I’m sure most days you could do quite well fishing size 20s on this stretch of water. But that day the wind had put a heavy chop in the water. There was no way a trout was going to spot a tiny dry fly. In two hours I caught 10 trout between 14 and 21 inches. Last time I looked, the guide had yet to put his client on a single fish.

Other hotspots can be very small streams with deep dropoff holes. In such cases, add weight to the fly to the point where it is almost unmanageable. Let the fly roll down the shallow streambed until it falls into the hole. If you see a flash, instantly set the hook and pray that the bruiser runs out of the hole. In most cases, the fish shoots back into the root wad and leaves you a shaking waste. Know what? I’ll take this kind of terror all day long.

On bigger rivers you must cover mmore water. Be thorough. Methodically cover a hole — front, middle, and back. Often, all you get is a flash — and you must be right there with the hookset. It’s a game of raw nerves and fast responses.

When things are not working in your favor or conditions are very low and clear, consider the upstream dead drift, covering the area completely. Another fun trick is to cast the fly upstream and then retrieve it as fast as you can when it reaches the desired depth.

Years ago a fishing guide told me, “I think the reason so few anglers fish with large flies is that most inherently distrust what they don’t understand. And yet, some of the oldest documented fly patterns are the giant, classic streamers of the Rangeley Lakes region of Maine that were created just after the turn of the century.”

Smart guy. He made me a believer. As with so much of life, we need to relearn the lessons of the past. Discuss this article with other fishermen in the Fly Fishing Forum.