Northerns prowl specific areas in fall. And it's not where you fished in spring. 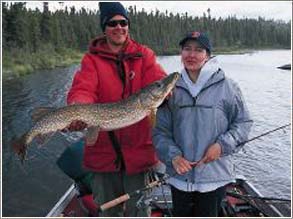 Big pike are tough to find in summer and even more difficult to catch. After the spawn they retreat to deep water where they remain inaccessible and aloof. Even if you’re lucky enough to catch one then, you’ll seldom catch two large pike in the same area. Yet, when aspens turn gold and teal fly south, these same fish begin a feeding frenzy that makes them reckless and vulnerable.

Although big pike are by nature solitary fish, several factors concentrate them into small areas when autumn arrives. Here they prowl, much like a wolf pack, feeding on migrating fish. Knowing where to look will help you find and catch these freshwater wolves.

Follow the Forage
At the first hint of cool weather, perch seek out green weeds in shallow water. Here, in anticipation of winter, they feed heavily on minnows. Schools of up to 200 perch will be pressed into deteriorating weedbeds. These teeming schools of perch attract big pike.

When north winds push minnows and perch into weedy, southern shallows, packs of deep-water pike close in for the kill. Pike also use the increased turbidity of storm-tossed shallows to ambush their prey. As a result, pike are most active when skies are windswept and gunmetal gray. But whether the weather is blustery or balmy, autumn pike will be striking in or above green weeds in less than 15 feet of water.

Some Weeds Are Greener
Not all green weeds are equal at producing big pike. For example, milfoil is often associated with northerns, but by autumn milfoil can be so thick and impenetrable that there simply isn’t room in it for really big pike to freely maneuver.

In contrast, bulrushes provide plenty of room for big fish and will hold pike long after other green weeds have died. Look for long stands of bulrushes with deep, irregular margins and many pockets of open water. (But don’t confuse bulrushes with spike rushes; the latter are usually knee-high and grow too thick to hold large pike.) Similarly, seek out areas of broadleaf cabbage for finding pike over junglelike mats of pondweed.

Tackle and Techniques
From now until green weeds die, use 1¿¿2-ounce or larger spinnerbaits. Tandem-blade lures like Strike King or Terminator are favorites. While color is a matter of personal preference, chartreuse dressings and gold or silver blade combinations have probably caught the most pike.

Troll along bulrushes at different speeds, letting the lure rise and fall. Occasionally lift your rod tip to give the lure a darting motion and to vary its pace. Pike are more apt to strike a lure that alternately speeds up and slows down. If you’re working submerged weeds, zigzag over the vegetation, concentrating on lush weeds along breaklines. These beds hold the greatest number of perch.

Only green weeds hold fish. As weeds turn brown and die, tactics need to change. Now is the time to cast spinnerbaits into the pockets of open water among bulrushes. You’ll get more strikes here by tipping your spinnerbaits with 4-inch chubs or golden shiners hooked through the head. Crankbaits like Rapala’s Shad Rap will also produce as green weeds vanish. They should be cast across big pockets of open water or trolled along bulrush banks.

Indian Summer
There is a period of time — from several days to a few weeks — when perch and pike are compressed into especially small areas. This happens when Indian summer arrives after a period of cold temperatures. By then, all visible weeds have turned brown.

However, in many lakes across the North, you’ll still find clumps of green weeds in 15 feet of water. This is about the deepest that submerged weeds like coontail can grow. A flasher or graph recorder can locate these areas, but you’ll need to determine if these deeper weeds are still green. Snag a few and bring them up to the surface. If you’re not snagging green weeds,, change tactics.

When all the weeds in a lake have turned brown, forage fish — and big pike — move to gravel bars, submerged rocky points, sunken islands, and areas of rock- or boulder-strewn bottoms. Put away the spinnerbaits and switch to the biggest, gaudiest spoons in your tackle box. Red Eye Wigglers, Johnson Weedless Silver Minnows, and Dardevles are all proven producers.

Cast across submerged points and islands, and vary the speed and depth of your retrieves. When weeds are dead, pike will haunt rocky structure down to depths of 20 feet. Make the spoon rise and fall, letting it tumble all the way to the bottom. Most strikes come as a spoon falls through the water — that’s when it most resembles a dying or injured fish.

Last-Chance Ciscoes
In late autumn, also concentrate on lakes with good populations of ciscoes. These lakes will be extremely deep, but they will hold the biggest pike.

To be sure, ciscoes are a mystery fish. They spend summer in water that may be 60 feet deep or more; therefore, most anglers never see them. But in November, just before lakes freeze over, their nocturnal spawning runs bring ciscoes inshore to shallow water.

Check with your local fisheries biologist to learn which lakes in your area contain ciscoes. However, even most conservation departments aren’t always sure which lakes hold these fish. Generally, ciscoes are found in lakes containing lake trout. But the best way to check for their presence is to visit a deep lake after dark in early November. Spawning ciscoes appear as a ribbon of turbulent water: The small fish, about the size of perch — and traveling in schools as numerous as smelt — will roll and thrash across the surface, backs and tails out of the water.

Big pike that have avoided the shallows until now will come inshore and feed ravenously on ciscoes. Now as never before, big pike are present in packs — catch one, and you’ll catch another nearby. Any lake with an abundance of fatty ciscoes is sure to produce monster-size pike.

Giant crankbaits are your best bet now: large-jointed Rapalas, Canadian Wigglers, and Creek Chub Pikie Minnows. While trolling is the surest way to locate pike at this time, you can sometimes find them by watching for ciscoes in clear-water lakes.

Wear polarized glasses and work shallow bottlenecks immediately adjacent to deep water. These are the narrow places between islands and headlands or at the end of submerged points that almost divide a lake in two. The best place is any narrow opening into a much wider bay. Early and late in the day — and at any time when the sky is dark and overcast — you can sometimes spot ciscoes moving through these bottlenecks. When you do, you can be sure big pike are nearby.

Pike feed on migrating ciscoes as the fish move in and out of spawning areas each day; typically, this is early in the morning and just before dark. Pike trail the ciscoes at a depth just below the migrating fish, striking at the ciscoes from underneath and behind. Troll back and forth across the deep side of bottleneck areas with the biggest Rebel Minnow or CountDown Rapala you can find, varying your depth until you get a strike. You’ll catch big pike here until the ciscoes have completed their spawning, just before ice covers the lake.