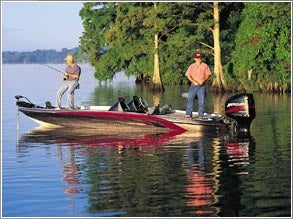 An expert would tell you that Roy Graham does just about everything wrong when he fishes for smallmouth bass. He fishes almost exclusively during the winter. He uses heavy tackle. He seldom casts more than a few feet. He doesn’t even use a boat. Yet Graham, a lawn-maintenance contractor from Hiawatha, West Virginia, catches more trophy-sized smallmouths than most of the so-called “experts” combined.

During one particularly hot streak between February 1990 and March 1991, for example, Graham landed 59 bronzebacks that weighed 3 pounds or more. Each catch, weighed on certified scales and then released, qualified Graham for a state-sponsored “trophy catch citation” and made him one of the state’s most envied anglers.

“For a while, when my name was appearing so regularly on the trophy citation list, I had a lot of people wondering just what it was I did to catch all those fish,” he says. A less forthright individual might have led curiosity-seekers to believe that he had learned the True Secrets of the Angling Universe from Lunker Lamas of Tibet, or that he had received a vision while on the road to Dale Hollow Lake for a smallmouth pilgrimage.

The Accidental Angler
Being basically an honest man, however, Graham admits that he stumbled across his trophy-taking technique by accident. “In February of 1990, I didn’t have anything else to do, so I decided to take a metal detector down to the New River and play around a bit,” he says. “Just for the heck of it, I took along a cane pole strung with light line and a crappie jig.

“When I got tired of messing around with the metal detector, I took the cane pole and started walking along the bank, jigging around boulders and deadfalls. I hadn’t been at it long when I hooked a really big smallmouth. The fish not only stole the jig, but it took the line and the tip guide off the pole to boot.”

Aware that he might be onto something, Graham returned the next day with a baitcasting rig and some bass jigs and launched his string of trophy smallmouth catches. “That was totally new territory for me,” he says. “Up to then, I’d never hooked a smallmouth bigger than 14 inches.”

Since then, he’s landed more than 120 bronzebacks that have qualified for trophy-catch awards. “It really isn’t difficult, once you know the basics,” Graham says.

Off-Color Conditions
Most critical on Graham’s checklist of trophy tactics is to wait for the proper river conditions. Though he fishes mainly on broad, rocky rivers punctuated with white-water rapids, he says his techniques will work on any river with high winter flows.

“I tend to have my best days when the river is higher than normal, just a little bit off-color, and has a water temperature of 42 to 45 degrees,” he says. “The high water level pushes the fish in close to the banks and makes them hold tight to cover. The higher the water, the closer to the bank I fish.

“I like it best when I can see about 1 to 2 feet down into the water. A little color to the water allows you to approach the fish more closely, and water temperatures in that preferred range make the smallmouths more active than they are during most of the winter.”

Tackle, he says, is the least important category on his checklist. He uses a stiff, telescoping baitcasting rod rigged with an average-priced reel. “The telescoping rod helps me get through the streamside brush more easily,” he explains. “Any type of reel would do; I just prefer a baitcaster.”

Sharp Departure
Graham sharply departs from accepted smallmouth dogma in his choice of line. “I know smallmouths are supposed to be a light-line species, but I use 17-pound-test mono. It allows me to set the hook on a very short line without worrying about breaking off a fish that might go 5 pounds or more.”

He says lure choice doesn’t matter much. He uses exacctly one jig pattern in one size — a weedless, crawfish-colored 3Â¿Â¿8-ounce spider-legged plastic jig with two twister tails, although “anything big and dark would work.”

The heavy jig allows him to fish close to the bottom, even in the swiftest of currents, and it allows him to keep the line taut and feel everything that happens to the lure.

“That’s critical,” he says. “Most of the time, the strikes are so light you can barely feel them. You really need to be able to feel the jig.”

Graham says the one true secret to catching fish his way is to cover plenty of ground. “I’ll often walk two or three miles of riverbank just to fish two or three places,” he says. “You don’t find big smallmouths just everywhere along the bank. You have to find places where the water is 4 to 5 feet deep, sheltered from the main current, with good cover.”

The best cover by far, he adds, is woody debris. “Everyone says smallmouths orient toward rocks, but I’m not so sure,” he says. “Between November and early April, when I do almost all of my fishing, I seem to take most of my fish near sunken logs.”

When Graham finds a likely spot, he pitches his jig into the pocket with an underhand toss. “There isn’t enough room for conventional casting,” he explains. “I’d get tangled in the tree branches if I tried to cast overhand or sidearm. Besides, I can reach any place I need to with just a pitch.”

High, Tight, and Hard
By keeping his rod tip high and his line tight, Graham hops the jig over submerged obstacles with slow, tiny twitches of his rod. When he feels a strike, he drops the tip, reels up his slack, and sets the hook — hard.

“You don’t have to worry about setting the hook too hard on a small fish,” he says. “The beauty of fishing at this time of year is that you seldom hook a bass that weighs less than 2 pounds. When I start catching fish down in the 10- to 12-inch range, I know it’s time for me to put the rod away until next winter.”

That usually happens to Graham sometime in April — precisely the time of year most anglers believe trophy smallmouth are just beginning to bite. So much for conventional wisdom.