Snakes on the Fly

To flyfish for northern pike you'd better have big flies, strong leaders and a healthy heart. 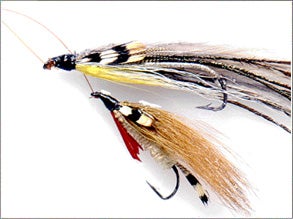 It was a typical August morning in Labrador-gray sky, cold drizzle, wind chill somewhere around freezing. In the afternoon the clouds would blow away and the sun would come out and the mayflies would hatch in the coves. Then, with luck, we’d catch a 6-pound native brook trout or two on dry flies.

But for now we had to improvise. Dorman, our Inuit guide, had motored us to the foot of the lake where it narrowed, quickened, and flowed into the next lake in the chain. He held out his closed fist.

“Try this,” he said. He opened his hand and dropped a deerhair mouse into mine. “Lemming,” he said. “Trout like ’em, eh?”

The trick, Dorman explained, was to heave the deerhair mouse to the opposite bank and swim it across the current on a tight line. On my third or fourth try, a wake appeared behind the mouse. I held my breath and kept it coming. The wake accelerated-then exploded. I heaved back on my 7-weight fly rod. My limp line sailed back over my head.

“Argh,” growled Dorman. “Damn snake. Bit you off. That was a good fly.”

“All big ones in this lake. Damn nuisances.”

Downright Scary
The Anglo-Saxons called it Luce, “the waterwolf,” and likened it (in both appearance and function) to the pike, their long, pointed weapon. The Latin name, Esox lucius, means “pitiless pike.” Northerns eat anything that moves-fish of all species, frogs, mice, even young muskrats and ducks-but in most waters they prey mainly on suckers and yellow perch.

Spinning and baitcasting with big plugs, trolling with spoons and spinner rigs, and still-fishing with live bait are all dependable methods for catching pike. But the fly rod is an equally effective tool for taking big northerns. They readily attack big streamers and bucktails retrieved just beneath the surface and floaters chugged across the top.

Watching a pike ambush a fly is like witnessing a mugging-it’s downright scary, but mesmerizing, too. The strike itself is the peak moment of pike fishing and the best reason to fish for them at the surface. You’ll notice the wake first, a casual “V” in the water 10 feet or more behind your fly. The fish may keep his distance for a moment or two, taking measure of his prey. Then, without warning, the wake accelerates. The sudden explosive attack throws spray and leaves a hole in the water.

Cardiologists advise their patients not to cast flies for pike. Once hooked, pike fight hard but tire quickly. But beware. They often allow themselves to be led docilely to the boat. Then, just as you dip your net into the water, they detonate, and if you’re not ready for it, you’ll find yourself holding a handful of splinters.

Big, Yellow Flies
To incite a northern to assault your fly, use a fast but erratic retrieve and keep it coming right up to the boat. Pike often follow their prey for a long distance, attacking only when they sense that it’s about to escape. So if a wake materializes behind your fly, you’re more likely to trigger a strike by speeding up your retrieve than by slowing it down.

When selecting a pike fly, there are two rules: Make it big, and make it yellow. A 5- or 6-inch yellow and red Mickey Finn bucktail (designed to imitate a yellow perch) cannot be beat.

Floating flies don’t need to be as big as subsurface streamers. The fuss and burble a floater kicks up make it appear larger than it actually is, and it will get the attention of any nearby northern. While deerhair floaters work beautifully, they don’t stand up well to a pike’s razor-sharp teeth. Foam-bodied, saltwater-sized poppers and sliders are more durable.

Barbless hooks and needle-nose pliers allow easy releases and minimize encounters with those nasty teeth. Pike have bony mouths that are hard to penetrate, so keep your hooks sharp. Even so, when a pike takes your fly, haul back several times to drive it home.

Pike prefer cool (around 65 degrees F), shallow (less than 15 feet deep) water that features cover such as fallen trees or weedbeds. Look for them in coves and along dropoffs. Unlike most other gamefish, northerns are primarily daytime feeders. Although they seem to come to the surface most readily on overcast days, I have taken plenty of pike under a bright midday sun. They are especially active immediately after ice-out and again in the fall. I’ve had less luck catching pike near the surface during the dog days of midsummer.

Big Snake, Eh?
Dorman made a face and mumbled something about “damn snakes,” but I persuaded him to take us to a cove where we could try for a big pike on a fly. I found a box of deerhair bass bugs in the bottom of my tackle box, added a shock tippet to my leader, and tied on the biggest yellow bug I had.

I burbled my fly along the edge of some lily pads, and on my ninth or 10th cast a wake bulged in the pads, zoomed after my bug, and engulfed it. I whooped, reared back, and set the hook. The fish headed for open water. My reel screamed. “Big snake, eh?” said Dorman, and when I glanced at him I saw he was grinning. I’ve converted him, I thought smugly.

I managed to horse the big fish around to the stern where Dorman could net him. “Yes, sir,” he repeated. “Big snake.” He lifted the net from the water. It held a 5-pound brook trout.