Certain activities are more challenging than others -- walking on a tightrope, juggling flaming torches, fishing with children. 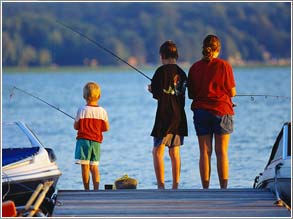 My daddy used to say, “You can either go fishing or take a kid fishing, but you can’t do both at the same time.”

I don’t know if that saying was original, but it certainly was profound, as anyone who has ever fished with small children knows. Of course, my dad had plenty of experience in this matter, having raised three boys of his own.

Recently, I’ve been gathering some of this experience myself. Typical is this scene, which took place aboard a new boat with lots of fancy thingamajigs on a gusty day with millions of people (many in overpowered death traps) on the lake. In the boat were a cage of frisky crickets, a wife who is deathly afraid of crickets and won’t touch any member of the animal kingdom, and two small boys who won’t leave anything alone, especially if it looks expensive, fragile, or dangerous.

We somehow found a quiet cove out of the wind. It was one of those places that just had to have fish, but before I could try it out I had to untangle the gear, which my sons, three and five, had insisted on loading in the boat themselves.

“Where’s the net?” I asked as I rummaged around in the snarl.

“You don’t own a net,” my wife reminded me. “Daniel dropped it over the side last week because he wanted to see if it would float. It didn’t.” Daniel, my five-year-old, is always performing “experiments” such as this.

I began untangling the rods, which sent Stevie, my impatient three-year-old, into a fit of impatience.

As luck would have it, his mother’s rod untangled first. The trouble was that she could cast, but refused to put on bait or touch a fish.

While I was baiting her hook, Daniel began examining the crickets with the same intense scrutiny that space aliens give to captured earthlings. He was also naming them.

Before Daniel could make up his mind which of his “pets” would become bait, my wife, Dawn, started shouting, “I got one! I got a fish! It’s a whopper!”

“What fish? I don’t see anything,” I said, peering into the water.

“It’s right there! Get it off. Hurry. There are lots more fish out there.”

“Oh, yeah, there is a bluegill under that cricket,” I said. “I almost didn’t see it because the cricket’s foot was in the way.”

About that time, Daniel discovered that dumping the container over might make it easier to pick a cricket up as they scrambled for freedom. He tested this theory with great success at his mother’s feet.

Her shrieks were drowned out by Stevie’s demands for his pole and Daniel’s urgent plea that he be allowed to keep my wife’s fish, which was flopping in the bottom of the boat, as a pet, along with his pet crickets Fred and Barney.

In time, the cricket stampede was headed off, with the more troublesome ringleaders on my wife’s and Daniel’s hooks, and now I was free to concentrate on Stevie’s heap of plastic and monofilament. As I untangled it, I made the mistake of saying I would cast it for him. Wrong move. Shouting, “I DO IT MYSELF,” he snatched the tiny Mickey Mouse rod from my hand. For a tot whose major muscles are in his mouth and lungs, Stevie achieved amazing distance on the cast. His aim was also splendid; it landed in a good-looking “fishy” spot. I couldn’t have selected a better place myself.

There was only one problem. The rod was sinking fast under the waves. Fortunately, the hook end was buried in my neck, which prevented us from losing Mickey altogether. I extracted the hook with minimal loss of blood, and began pulling in the wayward rod.

Before I’d retrieved it all the way, Daniel proclaimed that he had a fish. Without waiting for me, he dropped his rod and began hauling in the whopper hand over hand.

Just then, my wife announced that her hook was stuck in a tree. “Pull the boat over to shore and get it off for me,” she pleaded. “I’ve got more fish to catch. And hurry before spiders crawl out on the line to get me!”

Stevie interrupted, wailing, “Everybody’s catching fish but me! Hurry up and fix my pole. I want to fish.”

“Can I stop the bleeding first and put pieces of my neck back in the right places?” I asked.

“No!” the three of them shouted in unison.

After landing Daniel’s fish and Stevie’s fish, unsnagging my wife’s line, rebaiting hooks, unhooking fish, putting fish in the livewell, keeping tiny hands away from costly gadgets, unhooking several more fish, riding the waves as skiers roared by, rebaiting several more hooks, rounding up more stray crickets, taking more hooks from my skin, dodging when all three cast at once, unsnagging several more logs, retying more hooks after cutting Gordian tangles, and generally working myself to exhaustion, I was in no mood for joking when I heard my wife say, “Honey, why aren’t you fishing? I thought you liked to fish.”

“Grrrrrrrrrrrr,” was all I could think to say with two children around.

Somewhere in the distance, thunder rolled. Or perhaps it was my father falling off his rocking chair while laughing in heaven. The thunder clapped again, harder this time, and my wife called a halt to the outing.

As we ran the boat back to home base my sons gloated over their catches. “Mommy, guess what,” they proclaimed. “Daddy didn’t catch nothing again!”

Well, maybe I didn’t catch any fish, but I did catch something else: my father was right. If I really want to fish, I’ll ask my wife to take the kids to the movies and I’ll go fishing on my own.