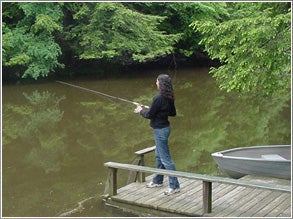 Begin each cast by squaring your body to the target. This is critical. The motion of swinging even an ultralight rod will tend to pull you off your center of balance, causing the cast to go astray. To prevent this from happening, you must keep your feet well planted and your shoulders squared to your feet. If your center of balance remains constant throughout the cast, you can more easily concentrate on rod-tip speed and your release.

In the final portion of a forward cast, be careful to release the line early enough to allow for a smooth transfer of energy from the rod to the lure but late enough to allow the rod tip to have begun to flex forward toward your target. This type of cast will give the lure a relatively high arc, so be mindful of any overhanging trees. The advantage is that your lure will hit the water almost noiselessly, unlike a cast with a flatter trajectory that tends to splat the lure on the water.

Avoiding Rod Overload
Many anglers complain that they have trouble casting ultralight gear over large pieces of water or in gusting winds. This makes sense, since ultralight lures seldom weigh more than 1/6 ounce. Even some of the longer ultralight rods-as long as 6 feet-won’t give you enough rod-tip speed in casting to cut through a 20-mile-an-hour breeze on an open lake or pond.

But even here you’re not helpless. First, if you can simply move so the wind is at your back, you won’t have to fight it. If you absolutely have to cast into the wind, lower the lure’s flight path by switching to a sidearm cast. It’s important to resist the urge to haul back and really muscle an overhand cast; this will usually result in an inaccurate cast that will more likely spook fish than attract them.

Remember that ultralight gear is extremely high-tech stuff. The rods are made from the same grades of graphite materials used in fly rods or expensive baitcasting rods. Let that technology do the really heavy lifting for you when you go fishing, but be mindful that there are limitations. If you need to make long casts into the wind, for example, try a slightly heavier lure (up to 1*3 ounce), and slow down your casting stroke.

In this case, using a heavier lure causes the rod to flex more in casting. By slowing down your cast, you allow the weight of the larger lure to pull the rod tip to the rear during the back cast. This bends and loads the rod, and that exaggerated flexing will help the rod to spring forward at high speed as you complete the forward cast and release the line.

But be careful. Too heavy a lure might overload the rod too much and kill the casting-stroke speed entirely. In an extreme case of overloading, the rod will snap or splinter, often at or near the rod grip.

Close-Quarters Casting
A low tree branch sweeps down over a small brook, leaving only 4 to 5 feet of clearance underneath. In the shadows cast by the limbs, several brook trout hold in a small run, their heads pointing upstream. This scenario is ideal for ultralight gear-a tight spot well suited to the short rod.

I found myself in this exact situation on the very last day of trout season. I knelt at the brook’s edge, flipped open the bail on my ultralight reel, and then fiddled with the 1/12-ounce Phoebe spoon in my left hand as I looked for the right place to land my cast. I gently grasped the bottom of the treble hook between my left thumb and forefinger while my right forefinger held the line taut on the reel.

As if drawing a bow, I drew the lure back as I pointed my rod tip toward the target, lining up my rod-grip thumb with the very top of the run where the water was the most turbulent. Once the rod tip was flexed about 90 degrees from the target, I released the lure, then the line. The Phoebe flew in a straight path underneath the tree branch to the very top of the run, splashing lightly in the froth.

This is a tricky move. You have to time the release of the lure to be a split second before you let the line go; otherwise the lure will go almost nowhere. It’s worthwhile spending a little time practicing this cast before trying it out on the water. Eventually, however, this bow-and-arrow cast will help you catch fish that others pass by.