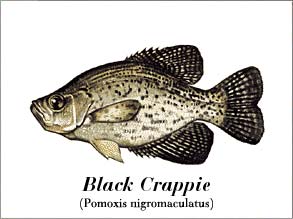 Butch Terpe raised his rod and, following a delicate give and take, lifted a 14-inch white crappie into the boat. A bright “slab” always looks special — the freckled shoulders gleam, the big eyes stare, and the fins bristle. The mint cleanness on the water is surpassed only by the sweet flavor on the table.

Terpe unhooked the crappie and dropped it into the live well. He smiled. “How many does that make?” I asked.

Terpe is a full-time fishing guide on Lake Conroe, Texas, a 21,000-acre public reservoir approximately one hour northeast of Houston. Conroe receives heavy pressure, especially during the spring, yet Terpe consistently puts half-day parties of two or three anglers on 30 to 50 crappies (the limit is 25 per day, 10-inch minimum). The “Crappie Commando” posts these numbers morning and afternoon, day after day, week after week.

Your Uncle Fred might rack up a big string now and then, but Terpe’s polished act on hard-fished open water is difficult to match. He has refined the lazy game of “perch jerking” to a science, and his method should score on any big lake that holds fishable numbers of crappies.

“I concentrate on defined cover like a brushpile or a bridge piling, and I like depths between 12 and 20 feet for vertical fishing,” says Terpe. “Fish in less than 10 feet tend to spook from the straight-overhead hull commotion, and fish much deeper than 25 feet get difficult to read — especially if it’s windy.”

The Crappie Commando’s assault is based on three factors: approach, tackle, and technique.

Approach
“This is pinpoint fishing, so positioning is very important,” Terpe says. “Crappies on defined cover tend to stack tight and won’t move far to eat. I use a chart recorder to locate my submerged cover, and once I find the spot, I toss a small marker buoy just to the side.”

Terpe uses both an anchor and a trolling motor. “If it’s slick calm, I’ll run just the trolling motor, but if the lake is chopping, I’ll slip the anchor. I like a heavy anchor line that doesn’t chew up your hands because in a typical half day of Â¿Â¿Â¿brush hopping,’ I do a lot of moving — maybe eight or 10 holes. And I like a long line so I can drop anchor well upwind and drift back into position without spooking the fish.”

An example of Terpe’s fine-tuned approach is his use of two small mushroom anchors knotted together rather than a single larger one; the two lighter anchors are easier to hoist repeatedly, but they spread out on bottom for a positive hold.

“When I anchor I also use a bow-mounted trolling motor; this is important. The anchor may keep you at a set length, but the wind can kick the boat side to side. You’ve got to stay lined up by checking that marker buoy, and bumping the trolling motor helps me adjust.”

Tackle
Terpe deliberately overloads with casting or spincasting rods and 12-pound monofilament line. The heavier gear provides more authority — not for the fish but for the fishing.

“Light spinning gear is frustrating for vertical fishing in deep water over heavy cover,” he says. “A 4- or 6-pound spinning line is hard to control in the wind, and any snag pretty much means a lost rig. The 12-pound mono is a good compromise. And I like a fluorescent green line; it’s easy to see, and it helps telegraph soft strikes.

“A short, limber rod also helps. By short, I mean 5, maybe 51Â¿Â¿2 feet. Long rods aren’t necessary for vertical fishing, and the extra length just gets in the way.”

Terpe uses only a hook and weight — no cork or float. A gold Aberdeen 1/0 hook (thin wire, wide gap) is the standard along with the 2- to 21Â¿Â¿2-inch shiner minnows that he maintains are superior for all-aroound crappie fishing. Larger minnows might tempt the occasional big slab, but they encourage misses from routine 10- to 12-inch keepers. Regardless of shiner length, he places the hook behind the dorsal fin. He typically uses a 3Â¿Â¿8- or 1Â¿Â¿2-ounce bullet-type slip weight. The heavy weight on free-spool carries the hook and minnow down through the water column and gives authority for reading a tight line against surface chops. A light pinch of weight can get lost in open water.

“I peg the weight with a broken toothpick about 7 to 10 inches above the hook. That distance is a good compromise around cover. Too short restricts the bait movement, and too long allows the minnow to tangle in the brush. You want an active minnow on a tight rein.”

Technique
Crappies schooling around defined cover often suspend. The effective way to locate action is to free-line to the bottom, then raise the minnow in one- or two-crank increments until something happens.

Crappie strikes are soft, and a fish moving in or up might even unweight the line. Most crappies are weak fighters. “I don’t mess with a landing net,” Terpe says. “Here’s where that short rod helps. As you raise a crappie to the surface, reel it to within about 3 feet of the tip, keeping the rod low, then swing the fish over the side. The short rod gives you a low, tight arc, and the soft tip acts as a shock absorber. You hardly ever lose one when you do this in one smooth motion. What you don’t want to do is hold a big slab on the surface and let it thrash and twist; that can tear a hook.”

A delicate touch is a big asset in this finesse fishing, and the best way to react to a tap or tremor is to simply lift the rod tip to set the point in the tissue-thin mouth. This is a disciplined skill at odds with the celebrated “eye-crossing” hookset doctrine so prevalent in bass fishing.

And if the resistance was caused by a 200-pound brown log rather than a 2-pound white perch, the tentative response should avoid burying the point. “When you snag, free-spool about a rod’s length of line,” says Terpe, “then raise the rod high and throw the tip to the water level. This drops 5 or 6 feet of slack and allows that heavy sinker to fall below the snagged hook. The quick drop should pull the point free, but you need that extra line to get the momentum going.”

If the dropback technique fails, point the rod down the line, reel tight, and pull straight up. The 12-pound line should open the thin-wire hook — an efficient advantage of the heavier tackle.

The first strikes usually are fast once a kicking shiner reaches a hovering gang of crappies; however, the tightly clustered fish may wise up after six or eight are jerked from the ranks. If no follow-up action occurs after 15 or 20 minutes, Terpe recommends moving.

“It’s a mistake to sit for an hour or two on a specific hole if you’re not catching fish. You should have several spots you can hit during an outing. You can always rest a good spot then ease back several hours later,” he says.

“Another advantage of moving is that you never know what you’ll find. A brushpile or treetop on a natural intercept area like a main lake point or the edge of a channel will attract all sorts of predators in a big reservoir. And they all like a live minnow. I’ve put crappie clients on 8- and 9-pound largemouth bass and 20- and 30-pound blue catfish. A big catfish is touch-and-go, but the casting tackle gives you a chance.

“Use my methods for crappie, and you also might catch the biggest fish of your life.”