Rocky bottoms aren't the only places to catch smallmouths. 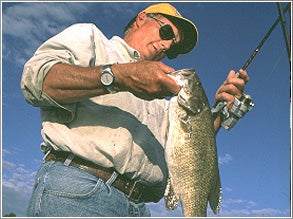 Say the words “smallmouth bass” and you probably picture shorelines and lake bottoms comprised of rock and gravel. The smallmouth’s penchant for this type of habitat has been well documented, but don’t overlook the weeds.

Anytime smallmouths live in lakes with aquatic vegetation, such as reeds, coontail, milfoil, and pondweed (a leafy plant that many fishermen call “cabbage”), they relate to this growth. Yes, rocky areas do contain the crayfish that bass relish, but weeds also harbor these and other food sources for bass.

“You can find the entire food chain in a weedbed,” says Bob Tomasko, a well-known guide from Burton, Ohio. “About the only weeds smallmouths don’t use are thick, shallow slop weeds that largemouths love.”

Weeds hold different amounts of bass depending on the season. In the spring, smallmouths can be found near small patches of reeds or clumps of underwater weed growth in hard-bottom areas consisting of sand, marl, gravel, or combinations of these substances. As spring progresses into summer, most of the bass make their way to deep water, which puts weed edges near dropoffs at a premium.

During the summer, smallmouths sometimes go deeper than the vegetation grows. The bass prowl weedlines on feeding sprees, but these events are short-lived. The advantage swings to anglers in the fall. As the water cools, the bass move to weed edges from their deep summer haunts and often feed throughout the day. When Tomasko finds active bass, he coaxes thrilling topwater strikes by working poppers and floating minnows over the deep edges of submerged weedbeds. If the bass refuse to come up, he retrieves a wide-wobbling crankbait, a jig dressed with a curly-tailed grub, or a jig-and-spinner combination along the deep side’s weedlines.

“On outside weed edges,” says Tomasko, “it’s not unusual to catch good numbers of largemouths right along with the smallmouths. If you fish holes inside thick weedbeds or shallower inside weedlines, you catch mainly largemouths.”

Smallmouths frequently relate loosely to outside weed edges. On some days, you’ll catch more of them by making long casts to the weeds and fishing your lures all the way back to the boat. Don’t be surprised when strikes occur well away from the weeds.

Topwater lures work nicely for this long-distance approach, including poppers and 3Â¿Â¿4-ounce, cigar-shaped, dog-walking stickbaits. Ripping a 1Â¿Â¿2- to 3Â¿Â¿4-ounce tandem-bladed chartreuse spinnerbait just beneath the surface provokes arm-wrenching strikes. These fish may have small mouths, but they like big meals, so a large No. 6 gold or chartreuse willowleaf trailing blade will likely grab their attention.

When smallmouths hang deep on weed edges, George Polosky, an accomplished smallmouth angler from Alliance, Ohio, finds them with a 5Â¿Â¿8-ounce vibrating blade. This all-metal lure features a flat, minnow-shaped blade that has a lead belly molded along its front edge. It sinks fast and wobbles violently when ripped up with the rod tip.

Despite a vibrating blade’s two exposed treble hooks, it’s one of Polosky’s most productive lures. He eases his boat along, right over the weed edge (typically 12 to 15 feet) and casts the vibrating blade out to deeper, open water slightly ahead of the boat.

“I hop it back over the bottom,” says Polosky, “until I hit the first little bit of weeds that grows only a foot or so off the bottom. Then I jerk the bait through the weeds and let it drop. They nail it on the fall every time.”

When Polosky catches one bass, he tosses out a marker buoy, because he usually finds bass in small bunches. The fish are always stationed along or in some type of irregularity in the weed edge, such as a sharp corner, a point, or a pocket. Once he finds a group of bass, Polosky may switch to a hair jig dressed with a small pork frog and work the spot from different angles.