When bass move out of the main body of a lake, anglers need to move with them. 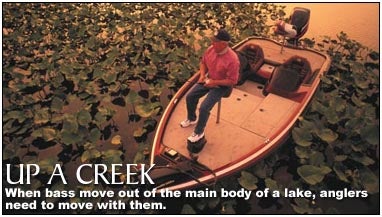 Among experienced fishing guides and tournament pros, looking for bass in more restricted tributaries and creeks rather than in a lake’s open water probably ranks as the most widely practiced technique in the sport. Even when the water turns cold during the winter, large tributaries that offer the right combinations of depth and cover can still be among the best places to find largemouths.

Although some tributaries undoubtedly have a resident bass population year-round, creek fishing really starts becoming a primary pattern earlier in the autumn when large numbers of fish migrate to follow their primary food source, gizzard and threadfin shad. The baitfish are migrating in their own search for more stable conditions because main-lake waters are cooling and oxygen levels are changing with each passing weather front.

As autumn progresses into winter and the creeks themselves get colder, shad begin moving back out of these tributaries in a reverse migration. Once again, many bass follow them. This time the baitfish are looking for deep water where temperatures do not change as rapidly.

Going Deep
The first criterion for anglers in choosing a winter tributary for bass fishing is depth. Most pros like to have water at least 18 to 25 feet deep. They also want this depth in a well-defined creek channel in which the edges and walls of the channel are distinct and drop sharply from shallower edges or flats.

Such a configuration provides a specific route or pathway for fish to follow, while the depth provides both the temperature stability and the security the baitfish are seeking. In other words, a good, deep creek means the baitfish won’t completely leave but rather will just move deeper.

Conversely, a good winter tributary will also have some flats along its edges, areas where the bottom depth stays fairly constant, be it at 8 feet or 20 feet. This is where bass usually move up to do their feeding. And of course, the shallower these flats are, the more accessible the fish.

Heading for Cover
The second criterion is cover, which might include stumps, rocks, vegetation, standing timber, or even boat docks. Such cover, especially vegetation, not only slows down any outward migration of both baitfish and bass but also changes their feeding habits. The more cover available, the more likely bass are to feed longer and more randomly throughout the day, instead of during just one or two shorter periods.

If cover and depth are keeping baitfish in a tributary, you’ll generally be able to see them visually or with your depthfinder. On colder mornings shad will be deeper and usually concentrated over the channel itself, where they show up well on depthfinders. Later in the afternoon, especially on sunny days, shad move closer to the surface and scatter and can be seen skipping across the water.

This is why early-morning winter bass fishing is seldom as productive as midday and afternoon fishing. Deeper water is always harder for anglers to handle, and the fish simply aren’t as active. Jigging spoons may finally tempt some of these bass, but it is usually a long and tedious process. It’s almost always better to schedule your fishing during the afternoon, especially on bright, sunny days.

In the sunshine, winter bass often become surprisingly active. More important, some move into quite shallow water, where they may be coaxed into hitting fast-moving reflex-type lures like jerkbaits or lipless crankbaits. On these days, vegetation will likely hold the most aggressive bass, especially if deep water is nearby. Around individual targets like stumps or boat dock pilings, jigs usually work well because they can be kept around the cover longer.

During these colder months, creeks and tributaries on the lower portion of a lake normally provide better winter fishing because they’re usually larger and deeper and attract more baitfish. Smaller tributaries will certainly draw some bass but seldom as many, and because they’re more shallow and get colder faster, these creeks won’t hold fish as long.

**Two Final Points **
If you don’t see any baitfish, but you know you’re still in a good tributary (if it’s good in summer, it will also be good in winter), consider starting at the mouth where water will be the deepest. Specifically, follow the two points of the tributary mouth into deeper water with your depthfinder until they flatten out and you’re in the same depth as the edge (not the bottom) of the channel itself. Somewhere between the ends of these points and the channel edge, you’re nearly always going to be close to bass.

These two areas may not be very large. Look at them carefully with your electronics. Jigging spoons or jigs should be your first choices, but if the water is not too deep, you might generate some strikes on a slow, bottom-bumping crankbait.

Once the water temperature drops to about 50 degrees or slightly lower and is constant from top to bottom, bass behavior can and often does change. There is no longer any real advantage for the fish to remain in those deep sanctuaries near the mouth of the creek. On many lakes, you can find some bass that actually move into shallow water near the mouth of the tributary and remain there most of the rest of the winter. Again, the key is the availability of shallow cover, especially vegetation.

If your lake doesn’t have vegetation, look for rock riprap. When you can find one of those long broken rock walls used to prevent wave erosion and add support around roadways and bridges in a big tributary, your odds of finding bass increase considerably.

Many think the rocks actually absorb the sun’s heat and thus warm the surrounding water, but a more accurate reason is that the rocks and the sun together provide a growing ground for algae, which attracts minnows that in turn bring in bass. The result? A riprap bank is always worth fishing with a crankbait on winter afternoons, especially after several days of bright, sunny skies. It may remain a good fishing spot for days, too.