When bass ignore your lures, it may be time to move on. Just make sure you don't go too far. 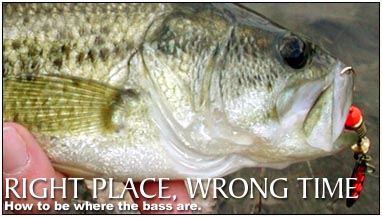 Any fishless period is often the result of improper timing. In other words, being in the right place but at the wrong time. Knowledgeable anglers consider this to be one of bass fishing’s toughest problems. Top bass tournament pros always consider timing when they’re searching for fish, and so should you.

Striking Out
If you’re not getting any strikes, your first thought may be that no bass are present in that spot. In truth, the fish very likely are there, but they’re simply inactive or dormant. After all, bass are inactive far more than they’re active. Sometime during the day they will start biting, and if you can learn their time schedule, you can catch them.

Initially, you won’t know if you’re in a bad area or if the fish are just being stubborn. But if you are fishing an area with good potential that includes cover, food, and perhaps a depth change, then you can usually assume it’s a matter of timing. Electroshocking boats of state game and fish departments prove this virtually every time they conduct their surveys, by bringing up quality bass from places anglers have fished repeatedly without a strike.

Your best approach is to revisit areas periodically over several hours in hopes you’ll find the fish more active. Numerous factors influence when and for how long bass feed, so study the existing conditions when you’re not getting strikes. This will help you recognize if and when conditions change.

“Some of the most easily recognized timing influences are weather related,” notes former bass fishing world champion Denny Brauer. “For instance, calm, slick water usually keeps bass tighter to cover and much less active, but a slight breeze that starts rippling the surface can make those fish start moving within minutes. When you see a change like this occur, try to position yourself near a long sloping point, on the edge of a wide flat, in a narrow channel, or in some other type of natural feeding area where bass may be looking for a meal. Start casting moving lures like spinnerbaits or crankbaits.

“Bright sunshine makes bass less inclined to strike, but cloud cover-even if only momentary-can trigger some activity, a timing factor you may be able to predict by watching the sky. Again, the flurry of activity may be brief and might end as soon as the sun breaks out, but this is what timing is all about.”

On some western impoundments with steep bluffs and little shoreline cover, shade and shadows play a critical role in bass timing. Shade, formed at the base of the bluffs by the angle of the sun, is not present until the afternoon hours. Anglers don’t even fish them during the morning.

Certainly one of the most important factors that affect timing is intermittent water movement. Both natural tides as well as current produced by water releases from dams can turn inactive bass into active fish right quick.

“We really saw this illustrated during the 2002 BASS Masters Classic on Alabama’s Coosa River,” Brauer says. “Early each morning, when eventual winner Jay Yelas reached his area just below the Logan Martin Dam, no water was being released from the dam and he had trouble catching any bass at all.

“Then, shortly after water releases began at midmorning, the bass began biting. Yelas had about two hours of fishing each day in the current, during which he boated more than 45 pounds of bass. His win was based entirely on timing.”

The Most Important Bass
At certain seasons of the year, baitfish movements enter into the timing equation. This is especially true in October and November when shad migrate into shallow water. Cool nights that lower water temperatures frequently push these schools of bait back into deeper depths, leaving coves and the backs of creeks completely devoid of activity. After several hours of warm sunshine, however, the shad move right back into those same coves, and bass feeding activity may start. The rule here: Check the coves early but plan to fish them in the afternoon.

Don’t make the mistake of thinking all bass in a lake follow the same schedule. They don’t. When you aren’t getting strikes and you believe you may be fishing a particular spot at the wrong time, move to different areas that allow you to fish confidently with your favorite techniques. What you’re looking for as much as anything is a single bass that can tell you the timing secret for that particular spot. Brauer has won several national tournaments this way, simply by catching “one fish that told on his buddies.”

This past May he won an event on Alabama’s Lake Eufaula by fishing lily pads. He’d fished a prominent field of pads one morning during practice but without a strike. He nearly eliminated them from consideration until late in the afternoon of the final practice day when, after 20 minutes of flipping his jig in the vegetation, Brauer finally caught a single 3-pounder.

That single bass told him fish were in fact using the lily pads but not until the afternoon, probably after hours of bright sunshine pushed them there. As a result of catching that one bass, Brauer timed his visits to the pad fields late during each day of competition, where he boated more than 55 pounds of fish over the four-day event.

Some anglers time their fishing trips to coincide with the daily major and minor feeding periods of the Solunar Tables, making certain they’re in a favorite fishing spot when these periods take place. Although doing so occasionally pays dividends, other influences frequently lessen the effectiveness of these cycles; in any event, it still leaves most of the rest of the day with a timing problem.

The overall solution is learning to recognize the types of places where bass should be. This comes with practice. When you’re in these places but still aren’t getting strikes, analyze the existing water, weather, and baitfish conditions and then make it a point to return several times during the day. Eventually, you’ll find the bass active and willing to hit your lures.