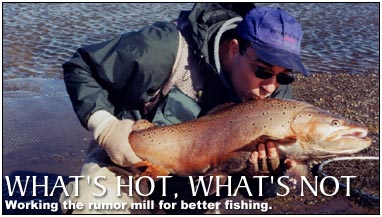 It’s the same old story no matter where you go. Somebody shows up at the local marina, tackle shop, or streamside fly emporium bragging about all the fish he just caught on a particular pattern or lure. The word spreads overnight by telephone and Internet. By the next afternoon, lucky Clancey behind the counter is all sold out of 6-inch red-shad worms, size 16 tan Caddis dries, or whatever else is rumored to be the day’s hot ticket.

Such is the fundamental nature of fishermen; suckers one and all for anything that could be a magic bullet, a reputed surefire way to catch more fish. That’s not the fundamental nature of fishing, however. Those few who can really figure out the differences between rumors and results have a big leg up on the rest of the pack. It’s a process that applies to both bass and trout fishing, though in somewhat different ways. Here’s how it works in each case.

Bass Rumors, Bass Facts
First, understand just what it is that you do and don’t know. If all you’ve heard is that some guy had a 50-bass day fishing a particular lake with a junebug worm, then you really don’t know much at all. Buy Clancey a few doughnuts (or coffee or whatever else it takes) and mine the rumor mill a little deeper. And by all means spend a little money in the shop to grease the information skids.

Yeah, I heard about that guy, too. So was he fishing creek channels or what? Oh, on points, you say. Right on the points or pretty far off them, did you notice? Far off and with a Carolina rig. Well, that’s helpful and thanks. I see you’re out of junebug worms. What other colors do you think might work? Oh, I gotcha; just about any dark-translucent worm, maybe with a little glitter. Well, okay. I’ll take a bag each of motor oil, watermelon purple glitter, and black sapphire. And thanks.

What you’ve just gained are the all-important particulars. That’s the kind of information that most of the fad followers don’t bother to get, the kind of details that make all the difference. There’s another way, too, that relies on your basic knowledge of bass fishing. Here’s where all that reading you’ve done will pay off.

You can often infer a great deal by combining geography and time of year into the hot-bait equation. Say you happen to hear that so-and-so hammered ’em yesterday on a red-shad lizard. It’s early May, which in your part of the world means many bass will be on their spawning beds. Tossing soft-plastic lizards at bedding bass is a basic equation in bass fishing. You can thus readily decipher exactly what the successful angler was doing. So go for it.

There’s a flip side to this whole coin, of course. Suppose you’re the lucky guy who’s doing the bragging at the dock. If all the action came on a white Strike King 3/8-ounce spinnerbait with silver blades, you’ll be tempted to call that the hottest lure on the lake. But what do you really know?

All you know for sure is that your spinnerbait happened to work well at a particular place and time. Because it was working well, you probably didn’t change lures often or at all. So you don’t know what else might have worked or-just as important-not worked. A different brand of spinnerbait might have been even better. Or a different color or size. Or you might have taken larger fish by working soft plastics deeper and more slowly. The devil, as usual, is in the details, so be careful with any extravagant hot-lure claims.

Bucking the Trout Trend
Similar reasoning applies in trout fishing, but there’s an added paradox: The better something works, the less likely it is to work in the immediate future. Today’s hot fly pattern is very apt to be tomorrow’s failure.

There are several reasons for this. Trout feed on insect hatches that we imitate with artificial flies. Hatches can change daily, and today’s hatch might not occur at all on the following day. For that reason allone, carrying the hot fly pattern recommended by a buddy may not produce the desired results. Then, too, our information age has made trout fishing increasingly difficult. News of good fishing is nationally known within hours. And in recent years, national wholesalers of trout flies have become consolidated. As a result, popular and productive waters are quickly crowded. And the crowds are all fishing the same hatches with the same flies.

Trout learn very quickly under this kind of pressure. So even though a major hatch might be ongoing for a week or two, the effectiveness of a once hot fly pattern can dwindle rapidly. The answer, oddly enough, is to find out what everybody’s using and then be prepared to use something else.

You might need a different style of emerger, for example, just to give the trout a different look. It’s also a good idea to find fly shops that have flies made solely for them by local tyers. Those fly patterns will have evolved locally for the demands of local conditions, which is something that national distributors often can’t match.

Sooner or later, you’re going to discover your own hot combinations, whether you’re targeting trout, bass, or other fish. If you’re tempted to brag, remember that running your mouth will put 20 guys on your spot within a day, all fishing the same lure or fly. So be nice, but not too nice. Those few other guys who truly understand the difference between what’s hot and what’s not can hit that combination on their own.