Given the right scent, fish will think your lure is something yummy. 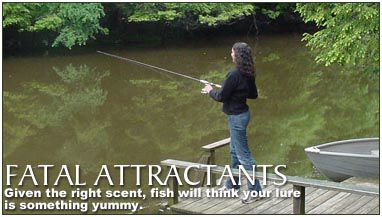 Fish attractants and masking scents come dressed up with clever names and slick packaging, but they’re basically smelly concoctions fishermen smear on worms, lizards, plugs, buzzbaits, jerkbaits, crankbaits, jigs, and spinners in hopes of enticing a largemouth, rainbow, muskie, walleye, bronzeback, or even a crappie to gulp down their offerings. They are fishing’s version of performance-enhancing drugs. But unlike in the Olympics, where better performance through chemicals means a one-way ticket home, bait doping is perfectly legal. Like in the Olympics, the effects of doping are difficult to measure.

“I use attractants all the time, all year long,” says weekend pro Marilyn Biszmaier. “And I think they do help attract fish. But I also think they’re really good for covering your human scent or other odors. A lot of times when I leave to go fishing, I’ll wash my hands, then put a drop of scent on them. That way, when I’m touching my equipment, I’m not getting any human scent on them.”

Fish attractants are marketed under numerous brand names: X-Spurt, Kick’n Bass, Yum, Dr. Juice, Smelly Jelly, and others. In varying degrees, each has the distinct odor of a bad kitchen experiment.

Entice vs. Disguise
Odorous baits aren’t new, of course. Catfishermen haul in fish by the ton using stuff that smells as if it fell off a garbage scow. But fish attractants aren’t stinkbaits. In some cases, they aren’t even attractants.

“Most of the stuff that is sold as a fish attractant is really not an attractant at all,” says Cliff Soward, a product development manager for Pradco, which makes and markets Yum. “Most attractants are masking agents. They actually cover up negative scents.” Soward says the basic difference between an attractant and a masking scent is that the attractant will release a shadlike enzyme into the water, making fish think something yummy is in the neighborhood. “It’s like when you walk down the street and smell a barbecue,” he says. “You may not know where the smell is coming from, but you get hungry.” A masking scent, on the other hand, does just what the term implies-it masks unnatural scents. “Masking does have a certain level of effectiveness because it does cover the negatives.”

This is important because fish and game identify us as foul-smelling creatures. A whiff of human stench screams predator alert to most critters. The main culprit is the amino acid L-Serine, which manifests itself through the fingertips and other pores.

“You can wash your hands all you want to, then go and touch a glass and leave a fingerprint,” Soward explains. “Bass can sense humans as predators, just like deer can. Why do you think deer hunters put their clothes in a bag of leaves before they go hunting? They understand about scents. Fishermen could take some lessons from deer hunters.”

What’s Garlic Got to Do With It?
Popular scent flavors include crawfish, shad, and garlic. Shad and crawfish are logical. However, nothing that swims in freshwater smells like garlic, although nearly every scent manufacturer offers a garlic-flavored attractant. Ken Kross, president of Kick’n Bass, says this is because there’s more to garlic than meets the nose. “Some plants give off a garlic hint,” says Kross, who has a background in cosmetic chemistry. “It’s a trigger stimulus for fish. There’s no doubt about it.”

Dr. Bill Spencer, an aquatic botanist at Murray State University, isn’t sure about the smelly plants’ qualities as fish-feeding trigger stimuli. But he agrees there is a natural hint of garlic in the water.

“There’s a green algae called chara that has a distinct garlic odor,” says Spencer. “It’s a macro algae that’s big like a plant, big enough to be put into an aquarium. It’s spread throughout the United States, but it’s not so frequent that you’ll find it in every pond. But when you drive a boat over it, and stir it up in the water, you can smell the garlic odor.”

Chara is not found in creeks or rivers, nor does it grow in turbid water. “It’s only found in clean, healthy water,” Spencer adds.

The botanist says other aquatic plants may also harbor the active ingredients that give garlic its pungent aroma as part of a natural defense mechanism. “Plants can’t run away. This is just speculation, but I wouldn’t be surprised if plants produced a garlic odor that keeps them from being eaten by herbivores. And it could be that fish are attracted to that garlic smell.”

Natural Instinct
Although they can’t match the nose of a whitetail, beagle, or Brittany, fish do have a distinct sense of smell, according to Gerry Buynak, a biologist and black bass specialist for the Kentucky Department of Fish and Wildlife Resources.

Buynak says bass are primarily sight feeders but will follow their noses. He suspects that attractants would be most effective during periods when fish are lethargic: fall through early spring and again in late summer. “Bass actually have a nasal opening,” he says. “They draw in water and can sense molecules in the water. But their sense of smell is something of a learned behavior. They would recognize the smell of a shad as something familiar. But fish learn through trial and error and natural instinct what to pick up.”

Buynak, a deer hunter who douses his boots with doe urine before walking into the woods, gives fishermen a wide leeway when it comes to the benefits of smearing garlic-flavored cream onto a plastic worm. “To me, I guess it’s more of a psychological thing. It’s like deer scents. I use them. I don’t know if they make any difference, but they don’t hurt.”

This much is known. Scent-related fishing problems are real and often develop long before an angler reaches the water. Tackle stored near a gasoline container, for example, will smell like a filling station to a fish. “If you’ve got your soft plastics in the same room where they can absorb gasoline odors, that’s a real no-no,” says Pradco’s Soward.

And that new rod you bought a few weeks ago that’s been catching fish like it’s the last word in tackle: It isn’t lucky, just clean. “Cork handles are nothing but sponges when it comes to absorbing odors,” Soward says. “You’ve heard people say, ‘I got a new rod, and I’ve caught a lot of fish off it.’ That may be because the cork handle hasn’t absorbed gasoline and suntan lotion and aftershave and everything else yet. A couple of hotspots for odors are rod handles and your boat’s steering wheel.”

Tie on any artificial bait, and it goes into the water with your scent print. It’s unavoidable. But when fish are in a feeding mood, it doesn’t seem to matter if you have manure on your hands. Fish bite. Scent manufacturers don’t hide from this fact. “Probably the No. 1 thing in a fisherman’s tackle box is his confidence,” Soward concludes. “And when fish are feeding, they’ll hit anything. But when fish are inactive, and not in a feeding mode, that’s when scents will help you.”