Choosing the right line is easy when you've got all the facts. 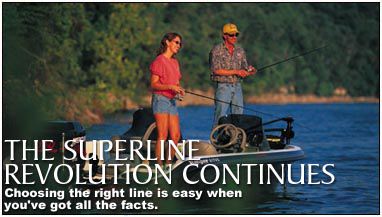 So-called superlines are still one of the most hotly argued angling topics from Montauk to Monterey. In both freshwater and salt, some guys love them. Some guys hate them. And many just seem confused over whether to switch from more conventional nylon monofilament. Here’s a quick rundown on just what constitutes a “superline,” along with how to make your own choices.

All superlines are made of polyethylene, a chemically inert, slippery plastic. The plastic is spun into extremely fine filaments that are in turn combined into a thread. The threads are usually then braided into fishing line of assorted thicknesses and strengths. Common to all such lines are extreme sensitivity, low stretch, and very high strength in proportion to line diameter. Retail prices are higher than for nylon monofilaments, partly because the manufacturing process is relatively complex.

Those characteristics all relate in one way or another to common problems in line usage. The slipperiness of polyethylene, for example, means that many basic knots just won’t work with these lines (see sidebar on following page). That same slickness means you have to put at least a few wraps of nylon mono on your reel spool before adding a superline. The nylon grips the spool core and prevents the entire mass of superline from simply spinning on the spool.

Get the Right Line Size
Small diameters and high strength are big advantages in these lines, but they also cause some problems. Most superlines are double-rated, with a “10/2” designation, for example, meaning 10-pound-test with an actual diameter equivalent to 2-pound-test nylon. Replacing your 10-pound-test nylon mono with 10-pound superline might seem to make sense at first, but that invites disaster.

This is because the superline’s diameter is so much smaller than your equivalent regular line. When you make a hookset or fight a fish, the stress at the reel will likely cause the extremely fine and slippery line to bury itself among underlying spool wraps, where it will jam.

The simple answer is to use a larger-diameter superline. The pound-test rating will be so high that it’s almost irrelevant. As a general rule of thumb, use a superline with two to three times the pound-test rating of the nylon mono you’d ordinarily choose. This will still be smaller in diameter than your conventional mono but should be large enough to avoid most tangles. For example, on freshwater baitcasting reels, instead of 12- or 15-pound nylon mono I often use 40- or 50-pound-test SpiderWire braid, which has a diameter roughly equivalent to 8-pound-test nylon mono. There’s no way I’m going to put 40 pounds of stress on that tackle without breaking it, but going smaller on line diameter would invite too much trouble.

On the plus side, superlines’ low stretch means extreme sensitivity. That’s a huge payoff. The elasticity of nylon dampens the feel you have when fishing a lure, almost as if your lure were attached to a rubber band. But superlines allow you to feel every wrinkle on the bottom.

Match Lines to Reels
Most superline braids are relatively limp. They work best on revolving-spool baitcasting or conventional reels where limpness and low memory are assets. I sometimes use them on spinning reels, but that limpness means the braided line doesn’t pop off the fixed spool as well during a cast.

For spinning reels, I use Berkley FireLine, which is a superline but not a braid. The raw material is essentially the same, but the fibers are heat-fused in parallel rather than woven. This line has more body and is stiffer than most superline braids, so it behaves better on spinning reels.

SpiderLine, meanwhile, has a new line for the 2003 season called SpiderWire Stealth. This is a braid with body, apparently more tightly woven than some other braids and Teflon-impregnated to further stiffen the line. It appears to retaiin its round cross-section longer than other superlines while being fished, rather than flattening quickly with wear. Because it stays round, it should tangle less often on spinning-reel spools. By my own early testing, this is definitely a plus.