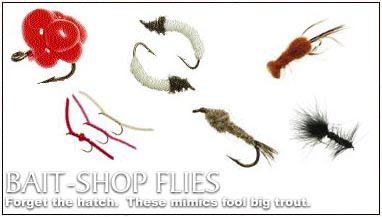 Bait shops sell a lot of bait for one good reason-it works. Flyfishermen would catch a lot more trout if they’d keep that fact in mind and fish with fly patterns that imitate worms, minnows, salmon eggs, grubs, and other standard baits.

The most wonderful thing about bait flies is that so many patterns for them exist and are sold commercially. Streamer fly patterns, for example, are available in nearly every size, hue, and configuration. If there’s a minnow, sculpin, darter, or bullhead swimming someplace, chances are it’s had a streamer tied to imitate it.

** Salmon Eggs**
Look in any fly catalog that caters to steelhead fishermen and you’ll find more salmon-egg patterns than you might ever have expected to exist. From humble single-egg patterns such as Glo-Bugs to multiple-egg imitations of sucker spawn, creative tyers have whipped up roe substitutes that will imitate most any ova.

Fished in a dead drift along the bottom, egg flies catch just as many fish as their bait-shop counterparts. They don’t come off the hook-and they don’t stink up your hands.

Hellgrammites
In waters where they are abundant, hellgrammites rank right up there with the very best trout baits. Big trout like a big mouthful, and hellgrammites are bigger than your average mayfly or stonefly nymph.

Tyers delight in creating highly detailed hellgrammite patterns, and several of them are available on the market. Most of the time, though, a plain old Black Woolly Bugger, size 4 to 10, imitates the originals handsomely.

**Crickets **
Grasshoppers make terrific trout bait, but few bait shops carry hoppers. They do, however, carry crickets. Trout relish crickets every bit as much as grasshoppers.

Fly anglers don’t often fish cricket patterns because they’re difficult to see. That’s understandable, but it’s a mistake. One of the nicest trout I ever caught slurped a cricket pattern cast tight to a grassy bank at sunset. I couldn’t see the fly, but I had no trouble seeing the bucket-size swirl the fish made when it rose.

Crayfish
Crayfish are difficult to maintain in captivity, but some bait shops keep them and sell them. Baitfishermen who target big brown trout swear by them.

Crayfish fly patterns tend to come and go, but one pattern that has lasted is Clouser’s Crayfish, invented by renowned smallmouth bass angler Bob Clouser. If it works on the Susquehanna River’s hard-fished smallmouths, it will work on brown trout just about anywhere.

**Grubs **
Bait anglers who fish with mealworms seldom get vicious strikes, but they get many smaller ones. Trout love the little grubs, probably because they so closely resemble caddisfly larvae.

Trout Chow
Everyone knows hatchery trout tend to be too trusting for their own good. That’s because they’re accustomed to having humans toss tasty food items their way. So the next time you fish a freshly stocked stream, toss a Purina Trout Chow imitation into view.

Only the most die-hard anglers take the time to tie precise matching patterns for hatchery-food pellets. For most of us, a No. 10 Gold-Ribbed Hare’s Ear imitates the original just fine.

**Worms **
As millions of worm fishermen have proved, the sight of something pink and wiggly will often trigger a trout’s feeding instinct. Anglers on New Mexxico’s San Juan River recognized that phenomenon more than a decade ago when they began tying short lengths of fine-textured pink or red chenille to their hooks. Since then, and despite the inherent bias flyfishermen tend to have against worms, the San Juan Worm has become a staple in fly boxes across the country.

It’s a deadly pattern, especially when it’s fished during the quick rise of water that comes after a thunderstorm. Even at other times, it’s very effective. In fact, my friend Joe Lewis, a guide with Mountain State Outfitters in Charleston, West Virginia, uses San Juan Worms when the water is low and clear on a tough limestone spring creek notorious for its finicky trout. He dead-drifts the worms under a high-floating strike indicator, and just as the fly is about to drift into a suspected holding lie, he throws a quick mend into his line to make the indicator bob and impart a little wiggle to the worm.

My friend knows what other fly anglers should learn-that bait catches trout, but bait-shop flies can do the job equally well.