How to find hotspots while it's still cold. 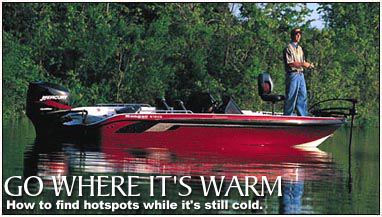 Water temperature can be critical when early-season bass are advancing and retreating with changes in the weather. As readings approach prespawning levels (high 50s, low 60s), the warmest shorelines with suitable habitat can attract aggressive fish, while similar areas with colder water seem lifeless. A few degrees can make a big difference.

Many “tricked” bass boats are equipped with water thermometers, but the angler without a high-tech rig can obtain an inexpensive handheld unit. The so-called stream thermometer, used for decades by trout anglers, is just as effective on bass water.

Even without a thermometer, the astute angler can locate productive areas by understanding the natural influences. For example, a northern shoreline exposed to wind and wave action from the south is usually warmer than the corresponding southern bank (which can hold lingering chill behind a stiff cold front). The shorelines and shallows most influenced by high-sun angles will be warmer than those shaded during the afternoon. A steep bluff that blocks the western sun might keep a prime stretch of bank chilled, while around the exposed corner the shallows are boiling with life.

The window between 2 p.m. and 5 p.m. is the warmest period of the day. Conversely, the dawn patrol revered by summer bass anglers can be sluggish during early season. This is especially true the day behind a cold front. In short, shoreline bass during the prespawn stage are often most aggressive during afternoon hours-sufficient reason to sleep in.

Water clarity can also be a factor. Murky water with suspended sediments seems to absorb solar heat faster than clear water. This does not mean you should race off to a mud hole, but if you can barely see the copper blades of a spinnerbait flashing through 10 or 12 inches of visibility, a juiced-up sow might be lurking in the nearby stickups. Keeping this in mind, the murky rise associated with early-season runoff might set up a specific creek.

Bottom structures that absorb or reflect solar heat can attract bass to specific spots. For example, high sun radiating off exposed rock can generate sufficient heat to stir lethargic bass into a strike. And a white-sand bottom in shallow, clear water can reflect sun and warm a shallow flat on a bright day.