Waiting is for wimps:the skills and flies you need to catch trout now. 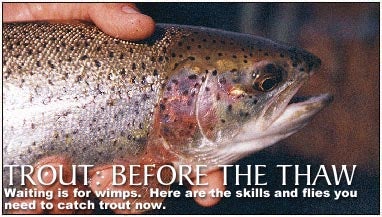 One of the hottest things in trout fishing is also the coldest: winter flyfishing. Spinfishermen aren’t excluded, of course, but most trout fishing before the thaw takes place in catch-and-release areas where bait is prohibited.

There are two essentials for this cabin-fever cure: (1) Fish only in high-percentage spots where trout are concentrated; (2) fish small nymph patterns slowly near the bottom.

HotSpots in the Cold
The best winter trout water is usually the warmest, which in February and March means water temperatures in the 40s or low 50s. Freestone streams that depend entirely on snowmelt often run colder than area tailwaters or spring-fed creeks. Head for the latter if possible. You can catch trout in any case; warmer water just makes it easier.

A call to your state fish agency or an Internet search under “winter trout fishing” or similar topic will get you to the best spots in your area. Some locations such as New Mexico’s San Juan River or the big White in Arkansas (both are tailwaters) are world famous for winter trout fishing.

Wherever you fish, don’t waste time on low-percentage water. The long, shallow flats and deep pools that held trout during the summer will also hold them in winter, but the trout will be so widely dispersed or so hard to reach that fishing either spot is a poor choice. Trout are less active in cold water, so you’ll often have to drift a nymph right by their noses. This will be most easily done in knee-deep riffles, at the heads of pools, and in middepth glides and runs.

Flies and Tackle
Aquatic-insect larvae and nymphs are at their greatest annual abundance in late winter. Combine that fact with the reluctance of winter trout to move very far, and nymph patterns become the logical choice. My standard winter rig is a pair of small tungsten beadhead nymphs separated by about 20 inches of 5X fluorocarbon tippet, sometimes with a small split shot attached to the leader between the two flies. Heavily pressured fish may require a finer leader. A floating line and 9-foot rod in 5- or 6-weight makes it easy to simply flip the weighted nymphs upstream and follow their drift down with a high-held rod to avoid drag.

Spinfishermen can accomplish the same things either by bouncing microjigs along the bottom or by suspending a weighted nymph under a very small float.