Hints, pointers, tricks, and secrets that will put you into more trout this season. 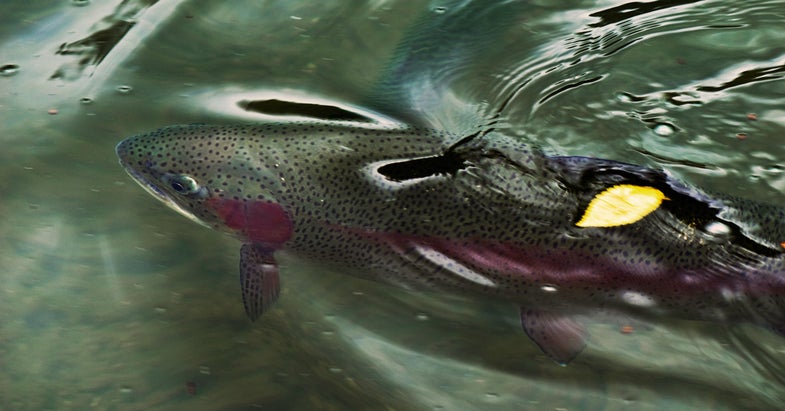 1) Walk before you fish. Anglers tend to wade in and start fishing at public access points, where, of course, every other angler wades in and starts fishing. But often you only need to walk a couple of hundred yards to have less pressured water to yourself. Fishermen willing to hike or wade even farther generally have the best shot at the most and largest trout.

2) Study the water. Impatient anglers who simply plunge in and start casting will miss, say, the grasshopper that falls into the current and the quick, swirling take of a large brown. It’s far wiser to take a few minutes to observe the conditions. Look for trout in the shallows, rise rings, hatching insects, and other indicators of the best choice of lure or fly.

3) Plan your casts. Take a few moments to figure the best way to effectively cover the stretch or run or pool, instead of casting helter-skelter to the first pieces of water that catch your eye. A good rule to remember: Fish the near water first. This helps you avoid the common mistake of wading where you should be fishing, or of throwing line over nearby lies that might yield one or more trout.

4) Don’t overreach. In general, short, controlled casts catch the most trout in streams and rivers. For flyfishermen, casts of 20 to 40 feet will allow longer, better drag-free drifts because a short line is easiest to manipulate and control in a current. You’ll also spook or put down fewer fish with a short cast than with a long one. Spinfishermen have an easier and less fish-alarming casting range, but even they can profit from shorter, accurate casts that keep lures working in prime lies.

5) Use your feet. Move your casting position to get the best distance and angle on prime water and visible fish. The more common practice of simply standing in one or two fixed positions and trying to hit every spot in sight results in overlong casts, bad drift angles, unnecessary false casting or rod waving, and (especially) poor, ineffective presentations.

6) Curb drag. When flyfishing with nymphs or dry flies in moving currents, err on the side of throwing too much slack into your casts rather than too little. Fishermen often cast too straight a fly line, especially when trying for extra distance. Even a slight current will quickly pull a straight line downstream, dragging the leader and fly. A copiously slack line, however, straightens out more slowly, ensuring the best and longest drag-free drifts.

7) Pick the pockets. In fast water, trout like to hold in the current cushions behind midstream boulders, gravel points, and bankside riprap. Because pocket water is bordered by fast currents, most presentations should be made with as short a line as possible. Often an upstream approach is best. Make one or two casts to each pocket before moving to the next.

8) Aim your casts above visible trout. Cast far enough above to make sure your fly or lure will settle into the proper drift, position, or depth by the time it reaches the fish zone. Casting a lure or fly right at a trout will either spook the fish or miss its field of vision.

9) Become a stalker of trout. Proceed as if a large, wary fish were lying near the bank of every piece of water you approach. Creep slowly and quietly-shock waves from clumping feet will spook fish. Maintain a low profile, crouching, crawling, or even knee-walking, especially by still water. Wear drab clothing and cast carefully. Wave your rod as little and as low as possible. The brighter the day-and the bigger the fish-the more stealth matters.

10) Mend your fly line early and often. Waiting until the fly is nearly or already beginning to drag before flipping the line upstream results in poor, fly-skidding mends. Early and frequent mends are the most effective ways to give your fly long, attractive float.

11) Cast to the spots other anglers don’t. Although short casts should be the general rule, anglers who can cast long and well when the need arises will profit from the ability to reach seldom-hit lies 70 or 80 feet (or more) in the distance.

12) Fish the foam lines. Always, everywhere, without fail-whenever you see a line (or a skim or block) of foam or surface bubbles, put your fly or lure first along the outer edge, then, on successive casts, deeper and deeper into the foam. Where the current collects foam, it also gathers baitfish and drifting insects-and trout.

13) Work the bank. In spring, and especially during periods of runoff, water at bankside will hold most of the good fish in the river, since the main currents are too fast and roiled. In summer and on into fall, grasshoppers and other terrestrials (beetles, ants, caterpillars) keep fish close to the banks, especially on windy days. Brown trout love undercut banks-the deeper the better-all year long.

14) Use enough tippet. A common and costly mistake is to use too little tippet at the end of a leader, rather than too much. When fishing dry flies and nymphs, tie on a minimum of 24 inches of fine, supple tippet material. For extra-delicate presentations, such as in still water or on spring creeks, a tippet of 3 or 4 feet is not too long.

15) Try new patterns. Trout do seem to become wary of the popular flies and lures that everyone else is using. Original designs are always worth a try, but sometimes old patterns can be revived with great success. For instance, once popular, then long neglected, the Bivisible now makes a great search fly, probably because it’s seen so rarely on today’s streams.

16) Get small. On hard-fished rivers around the country, including the big-water West, effective dry flies and nymphs are generally smaller now than they were one or two decades ago. Where a size 12 dry was once the standard, chances are a size 14 or even a 16 is what works best today. Much smaller flies-sizes 18 to 22-are often the best big-trout patterns you can use.

17) Tumble your lures. When fishing in fast, deep currents, don’t cast and retrieve in the standard way. Cast up and across, let the lure sink as close to the bottom as possible, but don’t reel in. With the rod tip up, maintain a tight line and pivot to follow the lure as it tumbles and drifts down the run. Thick, dense spoons and weighted spinners with large, easily turned blades are the best lures for this seldom used but deadly technique.

18) Try the unusual. Offbeat techniques can be effective when standard approaches don’t work. If drag-free dry flies fail, try giving them a twitch or skitter. If small flies don’t produce, throw something large and contrary-a size 10 Royal Wulff or Woolly Bugger. When small spinners and spoons aren’t getting attention, switch to a bass plug, or a grub-style crappie jig. There’s nothing to lose, and very often it’s the oddball variation that the fish want.

19) Practice casting. When you can’t fish, you can still get a casting workout in a backyard, a park, a swimming pool, or a snow-covered street. Focus on accuracy, technique (underhand and backhand casts with a spin rod; slack-line casts and curve casts with a fly rod), and distance. Casting expertise leads to better presentations and the ability to reach a wider range of water-and consequently, to more trout.

20)Search for seams to fish. “Seams” are bands of slow or smooth water that show on the surface where currents of differing speeds meet, and where trout like to hold and feed. Some seams are obvious, such as where an outside current cuts the edge of a pool. Others are subtler-for example, when one current is only slightly slower or faster than the one next to it. For an easy lesson in reading seams, cast your fly line straight across-stream. The line will ripple and bend at the seams.

21) Fish when others don’t. Get on the water earlier and stay later. Try to fish in midweek. In summer, fish after dark-when most other anglers have gone home, and when some of the largest trout of the year are taken.

22) Learn one or two streams well. Instead of roaming, spend a year fishing one or two waters. Learn the hatches and the predominant forage, the inlet creeks, the remote stretches, the prime lies, the best approaches to each stretch, pool, or run. The more intimately you know a stream, the better you’ll fish it.

23) Wear polarized sunglasses. A quality pair can mean the difference between seeing fish and missing them entirely. The glasses, which cut through otherwise impenetrable surface glare, also make it easier to follow the drift of your dry fly or the underwater action of a streamer or lure.

24) Approach pools from downstream. Working a pool from the tailout up means you can hook and play one trout after another without spooking other fish farther up the pool. Conversely, if you first hook or even frighten a trout at the head of the pool, it will likely alarm every other fish in the vicinity.

25) Seek out better anglers. A good mentor-even in the form of an experienced guide-can teach you more in a day than you might learn in a whole season of untutored effort. ams, cast your fly line straight across-stream. The line will ripple and bend at the seams.