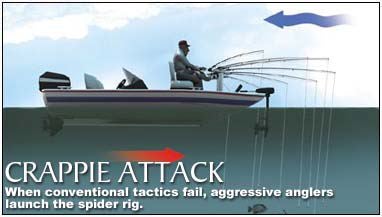 Everybody catches crappies when spawning urges pull them into planted brush, flooded bushes, boat docks, and other shallow cover. With such conditions, you can pluck these tasty fish like vine-ripened tomatoes. But crappies are harder to come by when they feed offshore, as they do most of the time.

To catch crappies throughout the year, you need a sophisticated technique like the one used by Mike Walters of Troy, Ohio, a successful tournament angler. He demonstrated its effectiveness to me on a popular reservoir. While other anglers struggled to catch fish that had vacated the banks, Walters boated nearly 40 of them with an advanced spider rigging method.

**The Spider Rig **
When fishing in states that allow multiple rods, Walters sets out eight limber spinning outfits in rod holders for two anglers, who sit on a homemade bench seat. Ideal rod holders let you set the hook and release the rod with a single upward sweep. Many crappie anglers use the quick-release, adjustable models made by Tite-Lok (800-848-3565; www.titelok.com). The holders should be fastened to an elevated mount, so you can respond quickly when crappies bite. One example is Tite-Lok’s sturdy Black Widow mount, which supports four of their rod holders. Some crappie anglers construct their own mounts from metal tubing or bars. Walters sets the 8-pound-test lines on each side at different depths to determine how deep the crappies are holding. Each line supports a tandem rig, making it more likely Walters will connect.

**Working the Wind **(see photo above right)
Pull the boat into a breeze slowly enough that the bell sinkers hold the lines straight up and down. A tailing breeze may nudge the boat too fast or swing the transom to the side. Working into a breeze lets you milk a hotspot for all that it’s worth. Whenever Walters quickly nabs two or more crappies, he pauses the electric motor. The breeze can then push the boat backward, which drags the tandem rigs back through the school of fish. Playing the motor against the wind keeps the baits in the strike zone.

Deep Water Setup
In the summer, crappies often hold along the edges of creek and river channels in deep water, especially those lined with stumps. Use a sonar unit to follow meandering creekbeds. Set lines on one side of the boat to catch fish holding close to cover on the ledges. Set baits on the other side deeper to catch crappies that are suspending over the creek channel. Use this same approach on the deep-water edge of submerged vegetation.

**Finding Scattered Slabs **
Before and after crappies spawn, they suspend near stumps and planted brush on flats and points not far from shallow spawning cover. These fish elude most anglers, but spider-rigging fishermen catch them by finding and following a productive depth contour. Thoroughly comb flats and points, and slip quietly up on specific crappie covers, such as an underwater brushpile. Drift with the breeze to snatch crappies scattered over a large area.