Five trophies and the incredible stories behind them. 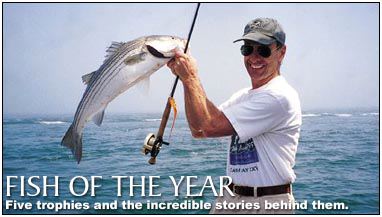 There’s nothing like a good fish story to motivate you before the fishing season gets going-especially stories of fish that made it into the record book. And 2002 wasn’t just an unlucky year for a lot of big fish. It was also a good year for fish stories: a 9-foot lemon shark caught on a tippet normally used for smallmouth bass. A New York muskie caught, ironically enough, by a Wisconsin expatriate. A tarpon that weighed almost twice as much as the 13-year-old boy who caught it. An alligator gar, born more than 25 years before the introduction of the Model T, taken on a summer night by an Oklahoma catfisherman. And a huge salmon caught by a woman who fished six hours a day for 30 straight days to catch it.

These are the stories of their great fish, told in their own words:

Where: Clearwater, Florida
We lived in Bardmore before my parents got divorced and I moved with my mom to Madeira. But these really nice people we lived next to, Mike and Bev Weingart, still take me out fishing every year.

It started out just like any other time. We launched out of Bel Air and headed toward Clearwater Pass. About halfway there, we stopped to catch some shad for chum with our throw nets. Finally we motored out through the pass into the Gulf. Near Hurricane Pass, we started seeing schools of tarpon.

We got ahead of a school and threw some shad chum out. We had two rods out in holders, and all of a sudden the one next to me bent double. I picked it up and set the hook. And he jumped right at that moment. You could see his whole body, head to tail, right in the air next to the boat. Usually the big ones just sort of tree jump, where they jump partway out and fall over like a tree getting cut down. But this one jumped five times in a row, all the way out of the water and each time so close I could have touched him.

He pulled us into shallow water, and that’s what really helped. I fought him for about 45 minutes. When we got him in close, he kept doing circles under the boat. And Mike would try to hold him with a gaff, but he was just too strong. Finally, he tired and Mike got the gaff in him and held his head out of the water. And then we had him.

After we got him on shore, I stuck my head in his mouth with my hat on and had room enough to move my head around. That’s a big fish.

Lemon Shark (112 pounds)
Record: IGFA Men’s 8-Pound Tippet Saltwater Fly Rod World Record (whaler shark category)
Angler: Alan Herum
Caught: April 17, 2002
Where: Key Largo, Florida
I fish hard, for records. What I do is find an opening in the books and just go get it. There’s a division in the IGFA [BRACKET “records”] called whaler sharks, which includes lemons. And the biggest one was only 60 or 70 pounds on 12- or 15-pound-test tippet. So this buddy of mine, Zane, and I went out in my 16-foot flats boat off Key Largo. I started out with 12-pound tippet and ran out of that, so I went down to 8. I was throwing a fly made from a 5-inch strip of red-dyed rabbit fur with a red marabou collar on a No. 4/0 hook with a 10-weight Loomis rod.

We hooked into this big lemon on the flats, where it’s about 2 feet deep, and he dragged us out to 7 or 8 feet and hugged the bottom. I got him up to the surface once, but we couldn’t get the gaff in him. Fifteen minutes later, he was still under the boat, and I said to Zane, “Either we break him off or we don’t, but I can’t keep doing this.” He finally came up. I’d been fighting him for two hours, but when we got the gaff in him, he went nuts. He bit the boat, and you could hear the fiberglass crunch. Lemons don’t have especially big teeth, but they’llust grind you up if they get you. I went up and tail-roped him, then Zane put a rope through his mouth and gills. He was more than 9 feet long. We tied his head off to the bow cleat and his tail to the tower so he couldn’t turn around and crunch us.

When we got back to the dock, I found a couple of teeth still embedded in the rub rail. But I had my record.

Alligator Gar (180 pounds)
Record:** Oklahoma State Record**
Angler: Deryl Landers
Caught: July 21, 2002
Where: Red River, Oklahoma
I was fishing from the bank with some guys at night for catfish, using cut buffalo fish for bait. I had about an ounce of weight out there on the bottom with an Eagle Claw long-shank No. 4/0 hook. I’ve been a guide and a commercial fisherman, and I’ve caught a lot of big fish, fresh and salt. But nothing ever hit like that gar. I had my rod in a holder, and even though I was standing right beside it, I just barely got it before he did. When that fish came up to splash the first time, I couldn’t believe my eyes. It looked like a stick of dynamite had gone off.

I was fishing an Abu Garcia 5500 reel, which holds about 125 yards of line. And that fish must have taken it and given it back 25 times. I fought him for an hour and 45 minutes, burned my thumb on the spool trying to keep some more drag on it, and just wore my body smooth out.

I had a gaff, and when he felt that he nearly flipped me over and pulled me in. I finally got him to shore, and there were three of us and we couldn’t budge him. We had to rope him and pull him up the bank with a truck. It wasn’t until the next morning that we got him to a certified scale. The game warden told me that fish probably had weighed well over 200 pounds. The biologist who analyzed one of his scales said he was 125 years old.

Chinook Salmon (82 pounds 4 ounces)
Record: IGFA 80-Pound Line-Class World Record
Angler: Jackie Johnson
Caught: July 30, 2002 **
Where: Kenai River, Alaska**
I really wanted a good fish this year to mount. I’d been fishing six hours a day from the opening of the season on July 1. I’d already let two nice ones go, a 45- and a 50-pounder. I was after a 60-pounder. It was about 10:20 in the morning and we were fishing Big Eddy on the Kenai from a 20-foot Willie Predator. I was bouncing a 6-ounce lead sinker with a little orange spinner tipped with salmon eggs off the bottom. I’d just popped open a beer when the rod went down. The fish was moving us away from the bank, then it took off upriver, which is what the big ones do. All these guides around us were cutting lines because they knew it was big and they couldn’t get out of the way fast enough. My friend Jerry’s driving the boat, and I’m reeling like crazy to stay connected, and the fish is using the whole river to get away. It went up and down the river twice.

And all of a sudden it stopped. And Jerry looked over and saw it. He doesn’t get serious too often, but he did then. He said, “You better get this fish.” But when it saw the boat it took off again. Finally, after another 10 minutes, we had him. And when I saw this huge tail sticking out of the net, I just started crying-I’d been fishing for him for such a long time.

Muskellunge (52 pounds)
Record: National Fresh Water Fishing Hall of Fame 25-Pound Line-Class World Record
Angler:** Gale Radtke**
Caught: July 10, 2002
Where: St. Lawrence River, New York
I guided and ran a boat landing and tackle shop for 28 years in Wisconsin, but I moved out here because the St. Lawrence is the best body of water I’ve ever seen. Mile after mile of unbelievable structure. The guides here don’t fish for muskies in the summer because they say the water’s too clear, but I like to fish for them.

It was about 9:30, a moonless night, and I was trolling a place between Clayton and Alexandria Bay. It was my own lure: a black Radtke’s Pike Minnow, 83/4 inches, three pieces for lots of wiggle. And when the rod flattens down in that holder all the way to the water, you know it’s a good one.

I fought that fish for half an hour. The little ones do acrobatics, but the big ones stay down and use their power. I was just hanging on, listening to that reel zinging each time he surged. Finally I put him in the boat and measured him: 581/2 inches long. Heck of a fish. about 9:30, a moonless night, and I was trolling a place between Clayton and Alexandria Bay. It was my own lure: a black Radtke’s Pike Minnow, 83/4 inches, three pieces for lots of wiggle. And when the rod flattens down in that holder all the way to the water, you know it’s a good one.

I fought that fish for half an hour. The little ones do acrobatics, but the big ones stay down and use their power. I was just hanging on, listening to that reel zinging each time he surged. Finally I put him in the boat and measured him: 581/2 inches long. Heck of a fish.