Kick your way to shallow-water largemouths. 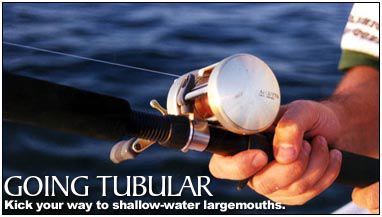 Call it stealth bass fishing. It’s silent. It causes little commotion. It’s how you can slip up on bass in shallow water and drop a lure in front of their unsuspecting noses.

The subject is float-tubing-sliding into an inner tubeÂ¿Â¿Â¿like craft and kicking with swim fins to propel yourself along shorelines or quiet flats. There’s no big-boat profile and no noisy electric motor to scare fish away. Instead, float-tubing is a hush-hush method that allows for some incredible close-quarters action.

It’s the device that makes such sport possible. Although the modern float tube likely evolved from a tractor inner tube, it bears little resemblance to its predecessor. Today’s top commercial models have comfortable sling-type seats and backrests, built-in tackle compartments, rod holders, multiple flotation compartments (in case one section springs a leak), and other conveniences. Float tubes are lightweight, portable, and relatively inexpensive-a great option for anglers who are on a budget or don’t have space to store a boat.

But perhaps the greatest advantage of float tubes is that they can be used on small waters that are inaccessible to big-boat anglers. Farm ponds, backwater sloughs, mining pits, oxbows, and streams routinely produce giant bass that are naÂ¿Â¿ve because of a lack of fishing pressure.

One of the best times to use a float tube is spring, when lunkers are spawning in the shallows. Anglers wearing polarized sunglasses can sometimes see fish, kick within short casting range, and then tempt them with a plastic worm, spinnerbait, or topwater lure. Also, float tubes are good for maneuvering up close to brush, logs, and other cover where precise casts translate into more strikes.