Tough conditions may be your best chance to catch big fish. 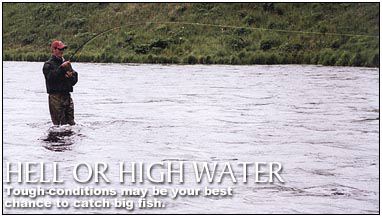 High water for trout anglers is like mud and mosquitoes: unpleasant, but sooner or later you’re going to have to deal with it. Rivers running cold and bank-full are typical April scenarios in the Northeast and Upper Midwest; mountain-state anglers might not encounter those conditions until May or June, when the high-peak snowpack finally starts to melt. A sudden shower or thunderstorm can quickly raise water levels at almost any time and place. Should these rough conditions scare you off? Only if you’re afraid of a big trout taking your line to the backing.

Love that Dirty Water
If you see streams start to flood from a sudden shower or thunderstorm, run-don’t walk-to the nearest trout water. The first interval of rising water, just as the stream starts to go off-color with silt, is your best shot at a big fish.

As the level goes up and the water becomes cloudy, trout become unusually aggressive. Not only do they seem to sense an influx of food brought by flooding, but also, the murky water gives them a sense of security from predators. That wise old brown trout that eluded you last season is suddenly made vulnerable by its own greed. Strip a big streamer fly, toss a larger Rapala, or slowly roll a rigged minnow through a pool. Then be ready for a truly massive strike.

Trout activity will lessen as short-term flooding peaks. There is usually a second feeding cycle, however, as floodwaters drop, and the period just before the water fully clears can likewise be a bonanza.

Go With the Flow
When abnormally high flows from spring runoff are pounding the outside bends and pushing rocks down the riffles where trout usually hold, the trout move out of the way. The edges of riffle areas become prime trout lies, where trout may hold behind newly submerged rocks and along grassy stream banks. Other good high-water areas include the insides of river bends, where the current has less force and where silt, sticks, and leaves accumulate on the bottom.

Work these areas by carefully drifting a nymph or wet fly or retrieving a small Mepps or Panther Martin spinner upstream. Worm fishermen will do best if they can keep the bait moving slowly along the bottom. Rig a split shot or two about a foot above your bait (see sidebar), cast upstream, and let the current roll your worm along the bottom as you feel the gentle tick-tick-tick of your split shot moving along the rocks.

Key Temperatures
Water temperature can be very cold during spring runoff. In general, if the water is high and colder than 50 degrees, you’ll need to fish nymphs, small jigs, or natural baits very slowly along the bottom. Trout just won’t move very far to take them.

If the water temperature is 50 degrees or higher (to a maximum of about 70 degrees), not only are trout more active, but natural trout foods are more active as well. Minnows and crayfish will be moving around, and aquatic insects will start to hatch. In high water, minnows will also move to edges and other areas of lesser current, which makes both streamer flies and minnow-imitating plugs good options. Mayflies and caddis will still emerge in the higher flows, and once again, quieter edges and backwaters may concentrate both emerging insects and rising trout.