10 tactics for fishing the most exciting hatch of the year-the mighty mayfly. 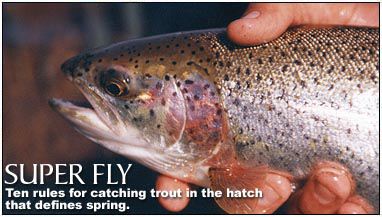 It exudes the chemistry of pure possibility. It’s a defining moment, a picture-perfect experience, a classic event. Call it what you will, but it’s no exaggeration to claim that a hatch of mayflies over a river of dimpling trout is the most sublime combination in all of flyfishing. No other insect stokes a fisherman’s hope in quite the same way. A mayfly is a promise with wings, and if a swirling hatch doesn’t float your boat, then friend, it’s time to start bailing.

Knowing the ways of the mayfly well enough to make good on that promise is the tricky part. Mayflies have been hatching for about 300 million years; I’ve been chasing them for about 35. The disproportion in experience is humbling. And while mayflies and trout are creatures of habit, they’re predictable only to a point-which means that finding a hatch and fishing it successfully falls into that broad middle ground between a sure thing and a pure crapshoot. I’ve been handed my hat on plenty of occasions by fickle flies that refuse to hatch, by fussy trout that refuse to bite, and by that persistent human tendency to blow it when opportunity knocks. But I’ve also logged enough time on the water to learn a few things:

1) Keep moving For the mayfly addict, the hatch is about one thing-finding rising trout. If I’m on my home river, dialed into the when and where of the hatch, I’ll stake out a reliable spot and wait for the bugs. But on unfamiliar water, I’ve found that my best bet is to keep moving. Mayfly emergences can be remarkably localized-a single pool, a bankside glide, a small patch of a big rock garden. Pick a stretch of river with a variety of water types-pools and smooth runs, broken riffles, deep bends, rocky pockets-and walk it slowly. Stay alert for bugs in the air or feeding fish. When you’ve covered that stretch, reverse course. A hatch can ramp up in short order, and a spot you passed 20 minutes ago could now be alive with risers.

**2) Look sharp **There’s an old joke about a man on his hands and knees under a street lamp looking for his car keys on the sidewalk at night. A passerby asks where he lost them. “Up the block, I think. I’m looking here because the light’s better.” Unless I keep a sharp eye, I find myself doing the same thing-looking for rises where they’re easily seen, in calm pools and smooth water. But mayflies can hatch anywhere, and some of the best action is often in or around fast currents. Broken-water rises can be devilishly difficult to see-just an odd wrinkle in the turbulence or a small, unnatural movement of the surface current-but they are impossible to see if you don’t look for them.

3) Follow form Rise forms (the shape and character of the disturbance made by a feeding fish) are to an angler what tracks are to a hunter-clues to animal behavior. A rise form that leaves a bubble or shows the nose or head of a fish is generally the signature of a trout eating adult mayflies afloat on the surface, or gorging on emerging flies or spent spinners flush in the surface film. A rise form made by the tail or dorsal fin usually indicates fish feeding on nymphs or emerging flies just beneath the surface. Choose your fly type accordingly.

4) Aim for a Target When you locate rising trout, think like a duck hunter. It’s tempting to “flock-shoot” the group, chuck your fly into the rings, and hope for the best. Instead, pick one fish and lead it-just as in wingshooting. Rise forms appear on the surface downstream of the trout’s underwater location; the faster the water, the farther upstream the trout will be. Be sure to drop your fly well above where the rise appeared. The deeper the water, the wider that field of vision, which often requires that you place a fly even farther upstream.

5) Presentation, Presentation,Presentation When my fly is snubbed by a succession of trout, my first impulse is to blame the pattern-it’s an easy target, a mple change to make, and usually the wrong decision. Presentation is the culprit far more often than pattern choice. The classic dry-fly cast, quartering upstream to the fish, is useful as a starting point, but it isn’t effective in every situation. More and more fishermen these days quarter the cast downstream so that the fly is presented ahead of the leader. Position yourself upstream and to one side of the rise. Place the fly-with plenty of slack-well above the fish, and shake out more slack line through the guides as necessary. Showing a trout the fly before the leader very often turns the trick.

6) Don’t be a Drag The toughest hatches to solve are more about the water-slow, clear pools or dead-level stretches of stream that don’t cover mistakes in presentation-than they are about the bugs. In this kind of water, trout don’t just notice your fly. They study it. And they see everything-especially the tiny, unnatural movements of the fly caused by the fact that it’s knotted to a chunk of fishing line. This drag can be invisible to the angler, and indifferent trout may be the only evidence. First, try lengthening your tippet to 4 or even 5 feet. I’ll go longer if I think it will help and can still manage to cast it. If that gets no results, clip the tippet back to about 6 inches and tie on a few feet of the next smaller tippet size.

7) Follow Protocol If the fish still ignore me, it’s time to rethink the fly pattern. Over time, most fishermen develop a protocol for changing flies during a mayfly hatch. Here’s mine:

a) Change size: Use the same pattern but one or two sizes smaller (with a corresponding reduction in tippet size).

b) Change silhouette: If I’ve been using a high-floating fly like a standard Adams or Cahill, I switch to a sparse, low-floating parachute or Comparadun version of the same fly.

**c) **Change type: If an adult mayfly imitation produces nothing, I’ll go with an emerger or floating nymph pattern.

8) Match Carefully When fishing mayfly hatches, the pattern you select can be half right and still be all wrong. On many waters, two or more species of mayflies may hatch simultaneously, or upright duns will hatch at the same time that spent spinners are drifting spread-eagle flat on the surface. These are called masking hatches, in which conspicuous, large or light-colored mayflies overshadow the presence of less visible, smaller or darker flies (or flush-floating spinners) that the trout are actually eating. I’ve tried to think like a fish all my angling life, but this inscrutable preference at times for hors d’oeuvre over entr¿¿e shows how much I still need to learn. When it’s feast for the trout but famine for me, it’s time to stop, put my nose a few inches from the water, and take a close look at what’s really happening.

9) Be Unorthodox When times call for desperate measures, don’t hesitate to tie on something completely different-a fly chosen precisely because it doesn’t match the hatch. An ant imitation, a small streamer, or even an oversize dry fly can all be productive during a mayfly hatch. On Idaho’s Silver Creek, known for tiny trico mayflies that cover the water like fuzz, I once beat my head against the hatch for an hour casting a size 20 Trico Spinner that I couldn’t see to amused rainbows that I couldn’t catch. More as an act of defiance than anything else, I cut off the Trico, tied on a size 16 Royal Wulff, and immediately started hooking fish. The collective grumbling of the orthodox hatch-matchers flailing away nearby was an unexpected bonus.