Taking the Tip out of a Canoe 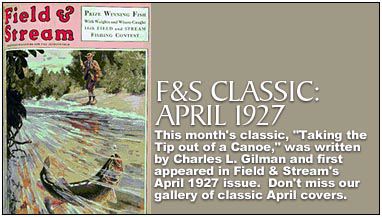 Taking the Tip out of a Canoe Charles L. Gilman April 1927 Because he can turn in his toes and sit on his feet, the Indian has gained a reputation for canoemanship which scares the average paleface out of competition. All the birch-bark rider has over the canoe tourist from the city is just this one accomplishment. White children have the same ability, up to the age when their legs grow long enough for them to sit on chairs. Then they lose it.

The Indian who clings to the life of the wigwam has no chairs to wean him from this primitive sitting posture. He eats, smokes, works and loafs all his life. Sometimes he is buried so.

Naturally, he sits on his feet when paddling a canoe. This puts his weight well below the water line. He can’t tip the canoe over nor can the canoe, so ballasted, be tipped.

Mechanically, any canoe in general and a birch-bark canoe in particular can’t be upset by anything short of a cyclone if the weight it carries is beneath its center of gravity. How well the Indian knows this and to what extent he utilizes the principle is illustrated by a much told anecdote of one of the big northern Minnesota lakes.

A tug boat was fighting for its life in a heavy blow. The pilot spied a birch canoe drifting past before the wind. Answering the call of humanity, the tug boat crew turned about at the risk of their lives. Running alongside of the canoe, they found its occupant, an Indian woman, stretched out flat on her back in the bottom of the birch–sound asleep. Talking it over later, they allowed the laugh was on them.

The habit of sitting low in the canoe forces upon the Indian a paddle technique which is different from that of the white man and, in general, less efficient. To reach the water he must slant his paddle out, much like an oar. He does not grip with his upper hand across the head of the paddle shaft, but around it, with his thumb toward the blade.

This demands a longer paddle than is required by a white man–one as long as the user is tall, as compared with one standing to the height of the user’s mouth if he kneels or to his eyes if he sits to paddle.

Practically speaking, it is out of the question for a white man to use the Indian’s position or technique. At the price of much agony, I achieved it toward the close of one season. But a winter of city dwelling, which included much chair-warming, took away my ability to fold my legs under me, and I have lacked the courage to re-acquire it.

A comfortable and efficient compromise between the suicidal folly of perching upon a canoe seat six to ten inches above the waterline and the impossible aboriginal crouch in the bottom of the canoe is to kneel. This brings the point of union between the paddler and the canoe below the waterline. It is almost as stable as the Indian’s posture. It permits the use of the “paleface stroke,” in which the paddle is very nearly perpendicular to the water and close alongside the canoe.

Romance being disregarded, this stroke is easier, drives the canoe faster and steers the canoe better than the Indian’s oar-like sweep. The Indian himself recognizes this fact. Within the last fifteen years the paddle with a plain round shaft has been displaced by that widened for a cross grip among the Indians with whom I am familiar. They sit low and grip around the shaft in rough water, and perch very high and use the cross-grip and vertical stroke when things are calm and peaceful and there is no danger.

Unlike ssitting on the feet, kneeling is a position easily assumed by a white man. For the first few days, until knees become calloused, a bit of a blanket or a mackinaw between the knee-cap and the ribs of the canoe is not unwelcome. After that, the kneeling position becomes as noticeably comfortable as it is obviously safe and efficient.

With the ordinary American-built canvas canoe, the usual practice is to kneel just in front of a seat or thwart, resting against it. The difference between this and roosting on a seat is the same difference between riding astride and trying to remain on a horse’s back by the aid of a side-saddle.

There is a further dividend, beyond that of safety, paid the man who gets as low in his canoe as his habits will permit. That is greater speed and endurance in paddling. When one sits on the usual built-in seat, all the work of propelling the canoe devolves upon his arm and shoulder muscles. To develop a stroke of efficient length he must twist his body at the midriff.

Stomach ache is epidemic among paddlers of this class. Usually it develops about ten a.m. and generally it is blamed upon something the cook served for breakfast.

The paddler who kneels puts no such strain upon his abdominal viscera. Neither does he work his arms and shoulders much. When his arms have set paddle for a stroke, he strikes a straight-from-the-shoulder blow with the hand which grasps the top of his paddle shaft, following it through with a forward sway of his entire body from the knees up. The lower hand, that grasping the shaft close to the blade, is the fulcrum of a lever. His weight does over half the actual work of propulsion.

Hands, wrists, arms, and shoulders play an important part in giving the paddle that nice combination of thrusts and twists which holds the canoe on a straight course or swerves it to the paddler’s will. But this is executive, or administrative work. It’s the weight of the body, swayed from the knees, which furnishes the power.

How steering is done is another matter. Any man who can paddle a canoe at all has the basic idea of it. The chief difference between the park lagoon stroke and the cruising is this:

The novice first gets steerageway upon the canoe, and then uses his paddle as a rudder. This is slow at best and futile against a head wind. The cruiser combines propulsion and steering, twisting the paddle during the stroke to give the required direction. He controls his canoe with a moving paddle, not with an idling blade.

This isn’t a correspondence lesson in advanced canoemanship. It is just an effort to point out how simply the Indian, who invented and perfected the canoe, keeps it right side up. He does not accomplish this important business by any complicated technique; he simply sits low and lets the law of gravitation do the rest.

Any white man can do as much. Granted he can’t, as a rule, sit on his feet, still he can, if he will, gain the same end–a lower center of gravity–by kneeling. The real procedure is to keep down where one belongs and let Mr. Newton’s well known law function.