Hit the waterways for overlooked largemouths. 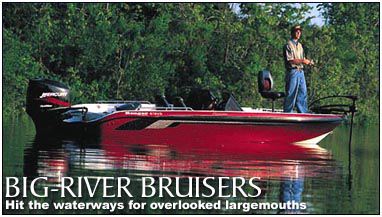 Thanks in large part to the Clean Water Act, some of the hottest bass fisheries in the country are the sluggish lower reaches of such mighty rivers as the Connecticut, Hudson, and Potomac. But though river largemouths are often abundant and, in places, overlooked, they are seldom pushovers. Moving water requires a different set of tactics from those called for in lakes and reservoirs.

“The biggest difference is that river bass migrate a lot,” says Potomac River guide and tournament angler Bill Kramer. “One day they’re up on the flats, the next day they’re in the channels. You’ve got to learn how they relate to changing currents and water levels, and you’ve got to keep covering water and trying different patterns until you find them.”

Quiet coves and backwaters off the main channel almost always hold bass, but some of the best bass-holding cover is in slack water created by current breaks, especially if there is structure in the form of weedbeds, rockpiles, or wood. “River bass utilize current breaks a lot for feeding,” says Connecticut River regular Tom Reynolds. “Basically, they’re waiting for the current to bring an easy meal by.”

On estuarine river sections, twice-daily tides further complicate the picture, but they also narrow down when to fish. Most river experts agree the most productive time to fish is during the two- to three-hour period around a changing tide. “There are no absolutes, but a dead low tide is generally best,” Kramer says. Flood tides, however, can also be very productive, because they let anglers get up onto shallow flats, weedbeds, and creek mouths that otherwise can be difficult to access.

Typically, river bass position themselves along the deeper, outer edges of weedbeds and rocky bars during an outgoing tide; they move to shallower, inner edges during incoming tides. “I fish vegetation during incoming tides, but I look for hard cover during outgoing tides,” Reynolds says. “Current is strongest when the tide is ebbing, and hard cover provides a better current break.”