When time is short and the fishing is more important than the catching, this is the place to be. 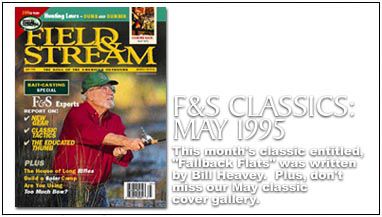 It’s the place you can get to in under an hour, the place that gets pounded like a dead tree at a woodpecker convention, the place big fish avoid, the place where the waters are stocked with compromise. It’s the place you go when time is short and the act of fishing is more important than the catching. In short, it’s your fallback.

My personal version is a scenic portion of a good-sized river 15 minutes from my front door. I could draw you its features in my sleep: the 2-foot ledge running diagonal to the current; chunky little islands in the middle where some resident Canadas have opened their own fertilizer farm; a line of celery grass off a sandbar that tapers into the current the way the last hairs of your eyebrow peter out into the skin on your temple. While I’d hardly ever been skunked here, neither had I ever unhooked a smallmouth over 13 inches in the ten years I’d been visiting.

Until last Friday, that is.

It was one of those days they couldn’t put enough numbers on your paycheck to make it worthwhile, when you feel like you might pour sugar in your boss’ gas tank unless you get away to a place where the only thing tugging at you will be a fish. I couldn’t slide out early enough to make it to Lunker City, a 2-hour drive. So I did what big people do: I waited until 4:59 and hit the gas for Fallback Flats. The way I look at it, 13 inches of fish is a hell of a lot more than zero inches, which is what you catch if you stay home.

Traffic was worse than usual and I knew I’d be lucky to get an hour on the water. Redemption came just as the sun was becoming tangled in the trees and three night herons flapped silently overhead (why is it getting to be that you see more kinds of wild birds near cities than in the country?). I was massaging the rocky bottom just upstream of the ledge with a 4-inch Scoundrel “live”-colored worm (call me crazy, but I was actually fishing a worm-colored worm) Texas-rigged on an 1?8-ounce slip sinker, when there came the most tentative of taps, the twitch of a sleeping baby’s finger. I raised my rod tip and held my breath, not quite sure I’d felt what I thought I’d felt. When I felt a second bump, I set that hook like it was connected to the backside of an IRS auditor. The ball of adrenalin on the other end began stripping 6-pound on a diving break for points north and east and I just held on. My spinning reel was making a sound like someone pulling masking tape off a roll, my arms were shaking, and I knew instantly this was not a catfish because although the fish stayed down, the line was cutting all through the water in a kind of fevered handwriting that could only spell “smallmouth.”

I couldn’t remember if this was the rod I hadn’t changed line on for three months or the fresh one, and I didn’t have time to check. But I made a bunch of promises about product loyalty to whoever’s line this was, because I wanted this fish. He jumped once, 15 yards out and as big as I’d imagined, then put on a final surge close to the boat when he saw what I looked like. But I kept pressure on him, and then it was over. He was dark and heavy, and as soon as I lifted him the hook fell from his mouth and thocked the deck of the canoe as if he’d been holding onto it out of pure courtesy.

“Oh, buddy, look at you,” I said, as if greeting an infant. I held him down gently with one hand and measured with the other. When stretched full out, my hand measures exactly 9 inches from thumb to little finger. The bass was all of that and an inch more and just over 3 pounds on my right-hand heft-o-meter. He stared back with his wild orange eye and snapped his body, refusing to be friends. How many thousand empty casts had I made at this place to arrive at the one connecting me to this creature? I had the sensation of watching an odometer turn over, of it all beginniing again.

I lowered him back into the water, my thumb still in his mouth, and swished him back and forth a couple times while he lay stunned. I don’t think anybody had ever treated him in this manner before. He wasn’t used to it. Suddenly, with a vicious swipe of his head, he was gone. I held my hand up. There was a little line of blood coming from where he’d nicked my thumb. I sucked it and smiled. The sun had gone for the night, leaving a soft molten glow on the underside of the farthest clouds.

I was back the next morning before the crowds, armed with fresh line and high hopes that the river hadn’t undergone a mood swing during the night. It hadn’t. I hammered them. I got ’em on the Scoundrel, on a 3-inch white grub, on a 6-inch red shad Slug-Go with insert weights. They weren’t in the eddies or more obvious still water, but holding in the tiniest pockets in relatively strong current about 4 feet deep. None were as big as the one from the night before, but by fallback standards they were trophies. I didn’t keep strict count, but I bet there were five fish in the 14- to 16-inch range, including one brawler who got loose in the boat and fought his way forward until he wrapped himself up in my sweatshirt. I fished for several hours, concentrating so hard it was like being in a trance.

When I finally took a break, everything around me seemed more vivid: the throbbing of a drowned limb caught in the current, the river’s endless self-applause as it completed a little ladder of riffles, the ancient scalloped rocks that look like shoulder blades. You can fish for years, not thinking about anything but where your next cast will be, and then look up and see everything around you as if it had just been created. That’s how it felt that day.

I wasn’t able to get back to that place for a week, and then I found about what I expected, which wasn’t much. But it was okay. I’d had my moment of glory, the mystery had been restored. About a month later a friend called up and said he’d like to get out on the water.

“I don’t have much time,” he said almost apologetically, “but we could hit that place nearby on the river if you’re up for it.”

“You think we’re gonna catch anything there?” I asked, not having decided whether I wanted to tell what had really happened.

“Well, prob’ly not,” he admitted. “I just want to get out. But we gotta get lucky there someday.”