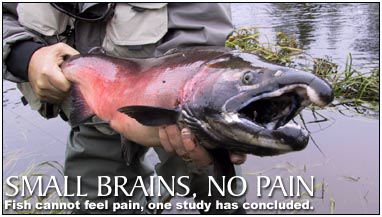 A University of Wyoming researcher has concluded that fish are incapable of feeling pain. Examining data collected from 15 years’ worth of studies on animals and their responses to stimuli, James D. Rose, a professor of zoology and physiology, says fish brains lack the specific regions of the cerebral cortex required to be aware of pain, fear, or any other emotion. His research was published in the academic journal, Reviews in Fisheries Science, in 2002.

Rose maintains that previous studies, frequently cited by animal rights groups, reporting that fish do feel pain had confused nociception-responding to a threatening stimulus-with pain itself.

Dan Sharron, a spokesman for PETA, which has spent millions on its “Fishing Hurts” anti-angling campaign, was unmoved by the evidence. “Dr. Rose is a fisherman, so he has a personal interest at stake,” Sharron says. “If fish can’t feel pain, that protects his hobby.”

But Rose dismisses such statements. “Fish struggle when hooked, so the human assumption is that they must be feeling what we would in that situation,” says Rose, an avid trout fisherman. “Humans, however, have a massive cerebral cortex that enables their awareness of pain and other emotions. Fish brains don’t have anything even close to this.”