Give Them a Plug 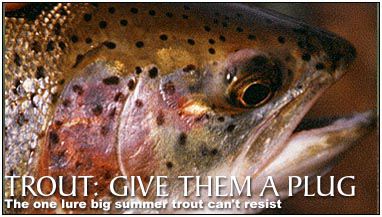 Know this: Slim, minnow-imitating plugs are the most effective spinning lures for large trout in streams and rivers nationwide. Although local sharpies occasionally score double-digit trout on leadhead microjigs on some southeastern tailwaters, tossing a Rapala is uniformly the best way to catch a big one, especially at dawn or dusk in the summer. Those balsa-cored Finnish lures have come to define the minnow-plug genre for trout if only by their longevity; Lauri Rapala built the first in 1936. There are now numerous variations that should get your attention, including the Storm ThunderStick, the Smithwick Rogue, and the newly popular Yo-Zuri Pin’s Minnow. Whatever your choice, it helps to match your plug to the water.

As the weather warms in June and July and trout become more aggressive, I switch from slow-sinking models to floating-diving versions. In most cases, I fish 21/2- to 31/2-inch plugs (like a size 7 Rapala) on 4-pound-test monofilament. But for bigger water and bigger fish-and for fishing after dark-I move up to 4- to 6-inch plugs on 8-pound-test. Still, there are some special problems in casting and retrieving these lures that you’ll have to overcome to fish them well.

Taming the Tumble
The rap on Rapalas and similar minnow-imitating plugs is that they’re difficult to throw. Sometimes they tumble in the air, tangling the line and wasting the cast-or so the complaints always go.

The operative word here is sometimes. On some casts, the plug tangles. On others, it doesn’t. But the plug itself doesn’t change from cast to cast. Your casting motion does, however, and that’s what causes the problem.

Take the time to relax a little and then smooth out your casting stroke. The plug will fly true to its target without tumbling. If you get distracted, frustrated, or just stub your toe on a rock, your casting may get sloppy again. Take a deep breath, then fire away-smoothly.

Some manufacturers now offer minnow plugs with an internal weight that moves to the rear of the plug body during the cast, thereby eliminating tumbling and adding distance. These do cast nicely, but not without a compromise. Floating minnow plugs work well because their extreme buoyancy helps to create an incredibly lifelike action in the water. The addition of any weight tends to deaden that action.

Making Them Hit
Most trout fishermen I’ve watched simply cast these plugs out and crank them back in. Once in a while they’ll hook a fish on that steady retrieve, which is the kind of occasional success that perpetuates bad technique. Here are three quick tips that will boost your hookup rate.

1) Cast beyond a target and then swim the plug into what you expect will be the strike zone. Real minnows never plop down from the sky within a trout’s view, and neither should your plug.

2) Use a darting retrieve, not a steady cranking. Crippled and vulnerable baitfish-the kind trout so dearly love-flutter, stutter, dart, and dive erratically in the current. Emulate this action by twitching your rod tip sharply and intermittently as you reel.

3) Try fishing upstream, even in heavy current. In small- to medium-size rivers, this puts you well behind the trout where they can’t see your approach. It also necessitates a fairly fast retrieve to keep the plug wiggling. This retrieve can draw reaction strikes from big trout that have to either quickly pounce or pass up a meal. When they pounce, you’ll know it.