Trout on the Dark Side

Big browns get active after the sun goes down. So should you. 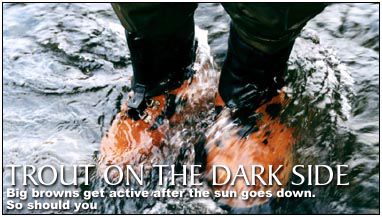 “Owl light,” an old-timer once called it, the dark hours when most humans and even most fishermen are sensibly asleep. But for a few-mainly the irrevocably fish-bit-it’s a perfect time to do a little casting for trout.

A river seems different at night. The water is more fragrant, for one thing, with cool aromas of clover and wet grass, wafts of cedar or pine. Sounds are eerily exaggerated in the darkness. The current is higher pitched, noisier, as though being run through amplifiers. The splash of a feeding trout, loud enough to make you flinch, can seem shockingly violent for a species so often associated with caution and delicacy. But then, being out in the late night invites a certain edginess. Crackling brush starts your heart racing. The first thought is Bear!, and when the flashlight finds a blinking raccoon (or worse, a stunned cottontail) you feel a little foolish. But this is night fishing. After a while your nerves settle and your eyes adjust to the dimness. Then you can concentrate on the pleasure at hand: large trout by owl light.

Telemetry studies in the last dozen years help back up what some anglers have long believed: that trophy-class brown trout are heavily, and in some cases predominantly, nocturnal. Biologists found that radio-tracked browns, all 20 inches or larger, spent most daylight hours hiding beneath logjams and undercut banks. Only after sunset did they come alive and turn into “roving predators” (as one report phrased it), cruising up- and downstream, sometimes for miles, in search of active prey like crayfish, sculpins, and crawling nymphs. It’s no surprise, then, that nighttime anglers in position to intercept these behemoths-on-the-prowl tend to catch the largest brown trout of summer.

Night Tactics
A good night of fishing usually begins, contrarily enough, in bright sunlight. Except on waters I know intimately, I plan night trips by first doing some daytime reconnaissance. The idea is to scout for possible hazards (see sidebar on page 64) and to find the lies and cover that hold the biggest browns, such as logjams, cutbanks, and deep pools (especially those whose surface is broken at the head by a falls or inlet currents). When trout are embedded in those lies during the day, it’s often difficult to reach them. But come nightfall, the fish will move out of the inapproachable cover and into adjacent, much more fishable feeding areas.

For this reason prime water can include sections of river that are considered only marginal during the day. Slow outside bends, inside-bend shallows, and calm, open flats can all be productive once darkness falls, particularly if they border deeper, “classic” habitat.

While you can take trout at night on spinning tackle, especially with a minnow plug fished slowly, it’s the perfect time for flyfishing. Save yourself from streamside fumbling when it’s time to cast by having your tackle ready to go. The main rigging difference will be using shorter and stronger leaders-6 to 7 feet at most, tapering to the heaviest tippet appropriate for the size of the fly. This game is generally more about power and muscle than finesse.

To avoid spooking nearby trout, approach the river edge quietly, soft-stepping rather than clumping. Keep your flashlight or headlamp beam away from target water. If you need to wade to reach scouted lies, enter the water gently.

Fishing in the dark is, at first, an odd, even bewildering experience, a matter of pure feel. To avoid frustrating tangles, stay with short casts and a slower stroke, and pare false casting to a minimum. Better yet, roll cast whenever possible. It’s more efficient and eliminates tree-snagged back casts, the bane of night fishing.

Fly selection and presentation needn’t be complicated. I like to start with a dry fly if at all feasible, since the surface take of a big brown at night is a special thrill. If local hhatches are present, by all means try to match them. Otherwise, go with a generalist attractor pattern such as a sizable caddis or “sedge” fly, Madame X, Goofus Bug, or Variant-all of which can produce explosive strikes when drifted, twitched, and even skated over dark water. An old but still effective ruse is a Muddler, heavily treated with floatant so that it can be drifted on the surface, pulled under for a few burbling inches, then allowed to pop back up to the surface and drift some more.

Streamers are perhaps the deadliest category of night flies. It’s hard to go wrong with Muddlers (in a standard sculpin pattern or marabou), Woolhead Sculpins, Woolly Buggers, or Leech patterns. These are especially productive when fished slowly along the bottom. Though it might seem counterintuitive, black (or dark brown or olive) is often the most effective color. To tempt the largest fish in the vicinity, try scuttling a crawfish fly over the streambed, or swimming a deer-hair mouse along the edge of cutbanks and across the surface of pools and placid backwaters.

When you hook a meaty trout at night, whether in penumbral bands of moonlight or inky darkness, the real fun begins. You must guess at the fish’s size by feel and by its sometimes startling surface thrashing. A large fish might zip off on a powerful, hair-raising run-hair-raising because there’s a limit to how fast and how far you can safely chase after it in the dark. Expect, then, to lose some weighty trout that simply can’t be stopped, fish that you will think about for days and weeks, wondering: How big was it?