The Weirdest Tackle Shop in America

At Capitol Fishing Tackle in Manhattan, employees never know what to expect. 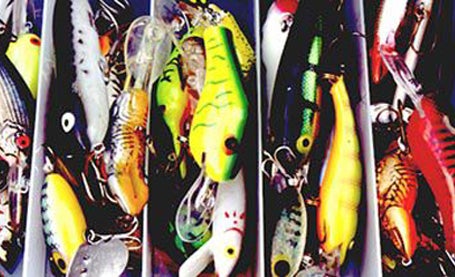 Capitol Fishing Tackle-as it now calls itself, having dropped its trade in cutlery back in 1976, though not the neon sign advertising it-occupies a long, narrow space on West 23rd Street, tucked between Chelsea Healing, an acupuncture salon, and Dan’s Chelsea Guitars, on the ground floor beneath the storied Chelsea Hotel, where, in Room 100, Sid Vicious of the Sex Pistols stabbed his girlfriend to death in 1978. Chelsea is a strenuously bohemian, shabby-chic downtown neighborhood, and thus, perhaps, not the setting in which one might expect to find New York City’s oldest and most democratic bait-and-tackle shop. Which is to say, this is not a neighborhood that seems starved for split shot. It may be the only tackle shop in the world, one guesses, where men in mesh tank tops strolling by hand in hand do not warrant even a mild second glance. In Chelsea, nothing is surprising; except, perhaps, the presence of Capitol Fishing Tackle.

Inside the store, a long glass case neatly filled with saltwater and freshwater reels runs the length of the western wall; the rest of the shop is a glorious hodgepodge of rods, stocked thickly as porcupine quills, and tackle, from shad trolling rigs to crab handlines to nautical charts to Yamamoto softbaits to Dr. Nappi’s Umbrella Rig for blues and stripers. The fundamentals of its decor, so far as anyone can recall, have not changed since Capitol moved to Chelsea in 1962, six and a half decades after opening farther uptown in 1897. Mounted fish-a shark, sailfish, a dolphin-hang from the dark-paneled walls, as does, somewhat incongruously, an elk head, which a regular customer donated to the store after his wife refused to allow the trophy into their apartment.

Alan Gordon and Richard Collins have owned Capitol since 1984 and 1976, respectively, and like their employees, whom Gordon refers to as his “sons,” they are devoted anglers. Gordon used to visit the store as a boy, with his father, and remembers being transfixed by the open bins of tackle that he was permitted to rummage through with boyish abandon. Years later, he shucked a future in the family textile business to rummage through those bins again. Perhaps due to boyish nostalgia, he is loathe to alter the store in any way. “The way it’s always been,” he maintains, is the way it shall stay. Once, an employee suggested that the store display snapshots of customers with their catches, as many tackle shops do, because tackle shops, said the employee, are at their hearts about fish stories. It’s said that it took years for Gordon to enact even this subtlest of changes.

The snapshots, displayed in a crooked row at eye level behind the reel counter, evidence the wide breadth of fish that Capitol’s customers pursue: stripers, weakfish, bluefish, fluke, blackfish, tuna, sea bass, porgies, upstate browns, and largemouth bass from the ponds in Central Park. John Martinez, who works part-time behind the counter, is constantly amazed by people who express shock that Manhattan could sustain such a tackle shop. “Look at the map,” he tells them. “There’s water all around us.” Still, Capitol has no real competition in the city; a shop called Urban Angler and the Orvis store cater to the buttoned-down Wall Street flyfishing crowd (Capitol does sell fly tackle, but in limited doses), and the chain sporting-goods stores, like Modell’s, cater to novices and bargain hunters.

Since tackle iis prohibitively expensive in many other nations, Capitol does a brisk trade with foreign tourists. A well-heeled European once dropped 20 grand in the store. The Sultan of Brunei, a saltwater angler, stopped in for a shopping spree years ago; his bodyguards shut the place down while he browsed. “These guys, they had Uzis,” Martinez recalls.

“We also had the king of some little South American country in here one time,” says Gordon. “Wait-was he a king? Anyway, he had a whole big brigade of FBI/CIA/whatever guarding him.” Martinez, a 15-year veteran of the store who, with his white hair and mustache, evokes Walter Cronkite with a Brooklyn accent, recalls a Latin American woman who was in to buy a surfcasting rod for her husband. “She was afraid of being mugged in New York, so she had all her cash stuffed in a pair of dungarees she was wearing under her dress. When she went to pay, she surprised the heck out of me by lifting up her dress. I didn’t know what was happening.”

The bulk of the clientele, however, is made up of midlevel Manhattan businessmen and blue-collar workers from the city’s outer boroughs-loud, lantern-jawed guys who spend their off days fishing at places like Sheepshead Bay in Brooklyn. These are the regulars whose faces show up in the photos tacked up behind the counter. Victor Sotomayor, the store’s saltwater specialist, christens most of them with nicknames: the Professor, Crazy Mike, Kevin the Axe Murderer, Construction Sam, Bass (“cause he eats, drinks, and sleeps largemouth bass”), and Lithium, who’s just plain “kooky.” And those are just the customers that fish. Every fifth or sixth shopper, it seems, is looking for something wholly unrelated to fishing. “You guys got bait?” a man asked recently.

“What kind?” Sotomayor shot back. Nightcrawlers, said the man. “Nope,” said Sotomayor, “no freshwater bait. Just frozen bait. Bunker, squid, clam bellies.” The man stood there for a while, awkwardly contemplating this, before asking, “Can you feed that stuff to a turtle?”

At midday the store fills up. Capitol’s lunch-hour business moves at a breakneck pace, especially in the fall when the stripers are boiling out at the Breezy Point jetty in Rockaway, Queens. Selling gear and tackle in New York City, however, comes with its own set of challenges. When counseling a customer on a rod purchase, for instance, you first have to ask if the customer will be traveling to his fishing destination via subway or car; if the former, he’ll need a two- or three-piece rod, since trying to maneuver a one-piece rod onto the F train is like trying to navigate Times Square with a jousting lance.

And you need to be prepared, in a city of 8 million, for the impossible-as opposed to the just plain weird-requests. “Sometimes someone will come in and say, Â¿Â¿Â¿I’m looking for this lure I used once in South Africa,'” says Martinez. “Come aahhhnn. But we treat everybody fairly here. We get people coming in who fish with a length of line rigged onto a beer can-seriously, they fish like that for blackfish out on the jetties-to people coming in with gear lists from some outfitter in South America or someplace. I mean, it’s New York-we got everybody and everything here.”