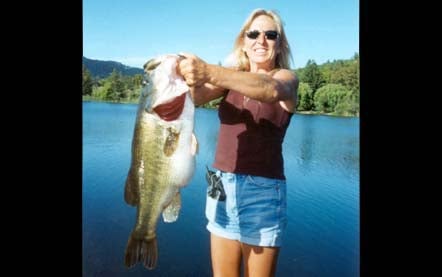 One of the sporting world’s most hallowed records may be in jeopardy. On August 24, 2003, an angler named Leaha Trew reportedly landed a 22-pound 8-ounce largemouth bass on Spring Lake in California’s Sonoma County. If certified, her bass would break George Perry’s iconic 71-year-old record of 22 pounds 4 ounces. But the importance of the record has led to intense scrutiny of Trew’s catch.

The 45-year-old Trew was fishing with her son, Javad Trew, in an inflatable raft on the 74-acre Spring Lake, when she made a cast toward a weedline with a 7-inch Storm WildEye Swim Bait and hooked into the fish. After a 10-minute struggle, the duo landed the fish and rowed to shore. They weighed the bass on an IGFA-certified Boga Grip handheld scale in front of a witness, snapped a single photo, and released the giant.

But the question remains: Is this the new world-record bass? Trew sent applications this summer to both the IGFA and the National Fresh Water Fishing Hall of Fame. The latter has classified her bass as the 12-pound-test record but has refused to recognize it as the all-tackle world record based on a lack of physical evidence. “Unfortunately, we would have had to examine the actual fish,” says a spokesman.

The IGFA has listed the fish as a pending world record, subject to approval of the four-person records confirmation committee, which includes BASS founder, Ray Scott. An announcement is expected sometime in 2004. Skeptics say that the existence of only one photo and the fact that a certified fish biologist was not on hand to see the fish are strikes against its being recognized as the new world record. But others point to the fact that there is no photo or other physical evidence of Perry’s fish, caught in the backwoods of Georgia in 1932.

Check with www.fieldandstream.com for updates on the pending IGFA ruling.