How to make bass fishing's hottest bait work for you. 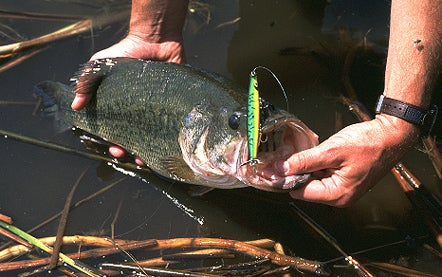 Don’t let the Senko worm’s simple appearance mislead you. After several years of steady tournament use, this plastic worm has become the hottest item in bass fishing. The Senko and its newer twin, the YUM Dinger, both offer a truly natural performance combined with terrific versatility.

Lure maker Gary Yamamoto designed the Senko to fall horizontally, in a long, squiggly belly flop, which is more natural than the nose-down attitude most soft-plastic baits assume. Many lure companies have introduced Senko spin-offs ranging from 3 to 7 inches, but the 5-inch models score best, for reasons known only to the bass. Depending upon where and how you fish, try these four different approaches to rigging the Senko-the main thing is to make the most of the worm’s liveliness.

(1) Weightless Texas Rig Yamamoto himself rigs a 5-inch Senko Texas-style with a 3/0 Gamakatsu EWG offset worm hook. “Weightless is the most effective way,” he says.

After casting the bait to a likely bass lair, let it sink freely on controlled slack line (a tight line will pull the bait ahead unnaturally). When you see the line jump or move, respond with a hard hookset (it helps to have a 6- to 61/2-foot medium-action graphite rod and 12- to 15-pound-test line). If no strike occurs on the initial drop, glide the Senko ahead by raising the rod tip. Then lower the tip to let the bait perform a short swan dive-and don’t be surprised by a savage hit after that little up-down move.

The weightless Texas rig is an all-day tactic that works best in clear to somewhat stained water. It’s not as effective in muddy water.

(2) Wacky-Style Texas bass pro Alton Jones often fishes a 5-inch YUM Dinger wacky-style by fixing a 3/0 Owner Mosquito live-bait hook at the worm’s midsection. This allows both ends of the bait to dance and flutter freely. You don’t need any weight for this, but you can add a very small split shot to the line about 12 inches above the hook to get the worm down. Just make sure you’re twitching it above the depth at which the bass are holding.

“I fish the wacky rig around riprap and boat docks,” Jones says, “dropping it slowly and letting it quiver on the bottom. Then I repeatedly pull the bait ahead and let it fall.” Should bass ignore this, he hot-cranks the worm several feet and kills it, triggering reflex strikes.

This style is excellent around almost any cover, such as grass or rocky banks, performing best in shallow, mostly clear water.

(3) Heavyweight Yamamoto matches a Texas-rigged Senko with a 1/4- to 5/8-ounce bullet sinker when he flips and pitches the bait into dense grass, flooded bushes, and other imposing cover. Though the heavier weights eliminate horizontal sink, they get the worm to bass that would never see it otherwise.

“Bass in deep cover are riled by the Senko’s thick body,” Yamamoto says. “When it hits the bottom, I shake it and they grab on.”

(4) Drop-Shot A 3- or 4-inch Senko-style bait on a drop-shot rig works wonders, especially when you fish it vertically. It’s a great bet for clear water 20 or more feet deep.

With a Palomar knot, fasten a small drop-shot hook about 3 feet above an egg sinker and run the hook through the nose of the worm. Drop the rig straight down. With the weight resting on the bottom, hold the rod parallel to the water and reel until the line grows taut. Then drop and lift the rod tip without pulling the weight off the bottom. Each drop of the rod puts slack in the line, which lets the Senko seduce bass with a horizontal fall and flutter.

The experts arrived at these four methods through a good deal of experimentation, so there’s no reason not to try other techniques with your Senko and YUM Dinger worms. As long as you can mostly preserve their horizontal swim and body pulse, be as daring as you like.