Bass in the Grass

How Shaw Grigsby reads the weeds for early-spring largemouths. 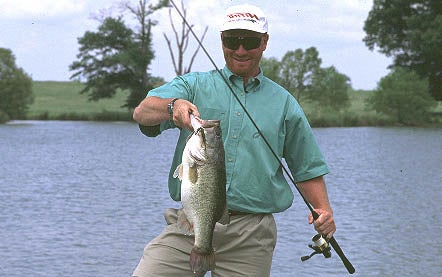 Vegetation is one of the best places to start searching for largemouths in the spring. That doesn’t mean the fishing is easy, though: Many grassbeds are vast and can extend from the shallows out to surprising depths. Fishermen who focus on one body of water will, over time, figure out where in the weeds the bass will be, but tournament anglers don’t have that luxury-they have to find bass now.

“Milfoil, hydrilla, elodea, and even lily pads can be intimidating,” says veteran Florida bass pro Shaw Grigsby, “but there are certain features bass prefer, and once you learn to recognize them, locating the fish is much easier.”

Much of Grigsby’s professional career-in which he’s won eight Bassmaster Tournament events and nearly $1.5 million in prize money-has been based on fishing greenery.

**Inside and Outside Edges **
The most important features of any vegetation, says Grigsby, are its borders. The “inside” edge, where the growth begins, could be as shallow as a few inches, although it’s usually several feet deep. The depth at the “outside” edge might be as much as 20 feet on some lakes if the water is extremely clear.

During the spawning season, from late February in the Deep South to May in the North, the key area will be the inner fringe. “Bass will use this for protection as well as a place to ambush prey,” says Grigsby. “The females will also hold right on this inside line until they’re ready to spawn.”

The actual location of the inside edge of a grassline is usually determined by bottom composition or water levels. For example, if the shallow water is extremely rocky or sandy, weeds like milfoil and even hydrilla will have a tough time getting established. On other lakes, fluctuating water levels often keep vegetation from growing completely to the shoreline. This happens most on lakes that are drawn down several feet in the winter, then allowed to rise again in the spring.

“In either instance,” says Grigsby, “a definite inside line is formed, and this is where you should concentrate your fishing early in the season, either with spinnerbaits, small crankbaits, or perhaps Carolina-rigged lizards.”

When using a spinnerbait, Grigsby lets the lure sink to the bottom, pumps it once to start the blades turning, then slowly crawls it back just above the bottom. With lipless crankbaits, he may run them into the weeds, then rip them free with his rod.

Working the Line
Grigsby recommends two ways to fish these grasslines. One is to position your boat in the vegetation so that you can cast into the shallow open water and retrieve your lure back to the edge. The other technique is to follow the line of growth with your boat, make long casts directly ahead, and retrieve along the verge.

Edges of vegetation are rarely perfectly straight. They have cuts, indentations, bends, and points, all of which may attract bass.

“It’s about opportunities that might give a bass an advantage,” says Grigsby. “A bass that stations itself on a grassy point might be able to see as much as 180 degrees around it. That bass can dart out and grab a small minnow and be safely back in the weeds in an instant.”

Grigsby casts parallel to the inside edge so that his lure remains in a potential strike zone for as long as possible. A slow but steady retrieve near the bottom, close to the border, is best. Points and bends in the vegetation should be fished from different angles, too.

Any additional type of structure, such as a ditch, a roadbed, or even a small creek channel, will increase your chances of finding bass. Isolated pieces of cover-stumps, rocks, fallen trees-may also become magnets for fish.

But the key is pinpointing the weedline. “As long as you can locate a definite inside line to the vegetation,” says Grigsby, “you’ll be able to catch bass.”