Why Dixon Lake is poised to make history. 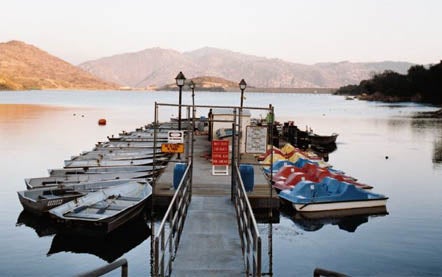 So here’s the prevailing theory on Dixon Lake, a man-made reservoir on the outskirts of San Diego: that fish that Jed Dickerson caught last May-you know, the 21-pound 11.2-ounce bucketmouth that was the fourth largest bass of all time and perhaps just a few bites of breakfast from breaking the world record? That was the same fish that Mike Long landed two years earlier. It had the matching thumbtack-size black spot on its gill plate, an identical scale sample, and the same slovenly truck driver’s belly. Except it was a pound heavier. Dickerson, a 30-year-old, happy-go-lucky casino game manager from Carlsbad, released it, of course. No reason to keep it if it wasn’t the world record. But this fall, when a couple of trout fishermen found the fish floating belly-up, the monstrous fish’s two-year reign as the queen bass of San Diego was over.

But Dixon’s reign may be just beginning. “There are fish just as big and bigger that are still in there,” says Larry Botroff, a fish biologist for the city of San Diego. For proof, look no further than the record books: Since 2001, Dixon has been the hottest lunker lake in the country, producing three of the top 15 largest recorded bass of all time.

On the surface, Dixon Lake would seem an unlikely place for all the angling attention it is getting. Surrounded by hills of oaks and scrubby chaparral, the 76-acre reservoir is filled mainly by Colorado River water intended to slake the thirst of the San Diego suburbs. It’s 80 feet at its deepest point and has only four named coves. Hard-core anglers fish from 6 a.m. until sundown in one of the 50 aluminum Velco boats-outfitted with electric motors or oars-that are rented on a first-come, first-served basis. The reservoir was stocked with Florida-strain largemouths six years before it opened in 1971 but never got the angling attention given to other San DiegoÂ¿Â¿Â¿area lakes. That is, until Mike Long made the scene.

Long, a 37-year-old construction manager from Poway, is arguably the best big-bass fisherman alive, with 275 fish over 10 pounds to his credit, 35 of which are over 15. He once considered Dixon his secret honey hole, fishing it with friend John Kerr for 15 years. “I can remember when my truck would be the only one in the parking lot,” he says. But thanks to the 20-pound 12-ounce fish he landed in 2001, the word got out. Almost overnight, boats crowded the lake.

A couple of those boats were occupied by Dickerson and his two buddies since grade school, Mac Weakley and Mike Winn. Caught up in big-bass fever, the trio fished the lake hard, putting in over 200 angling days a year. Their work paid off last May when Dickerson, on his 10th cast of the morning, hooked and landed the magnificent bass with a Mission Fish swim bait just before 7 a.m. Mike Long was on hand that day to see his fish again, two years older and 1 pound heavier. “I was happy for Jed,” he says. “He certainly worked for it.”

While not exactly the Crips and the Bloods, there is a bit of a rivalry between the two groups. “We get along,” Dickerson says. “But there’s definitely some competition.” One thing they all agree on is that the potential world record swims in Dixon’s clear waters. “Someone will break the record, maybe this year, maybe next,” says Long. It could be him. Or you.