Why we needed the large-arbor revolution. 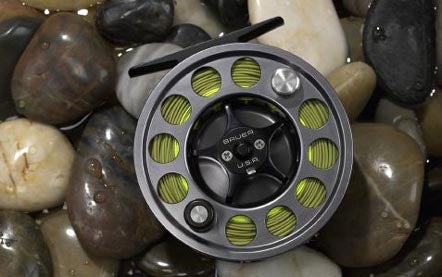 Fly reels designed for trout fishing have been essentially unchanged since 1874, when Charles Orvis patented the first American ventilated, narrow-spool model. Sure, a few advances have come along, such as palming rims, better metals and machining, and more sophisticated drags. Still, even modern reels have been nothing more than a handle attached to a deep, narrow spool revolving on a spindle.

But now there’s a new breed of reel on the water, a design so compelling and popular that in a few years you might be hard pressed to find a traditional trout reel. Large-arbor fly reels are the hottest thing in flyfishing since the introduction of graphite rods in the 1970s. They won’t help you cast farther, but they will help you fish with substantially greater ease.

**Less Reeling **
The most important attribute of large-arbor designs is a greatly increased retrieve rate. Check out this example: My old standard 5-weight trout reel has a naked spool diameter of 1/2 inch. If I start cranking when it’s empty, I’m only retrieving 1.6 inches per crank. With one of the new 5-weight large-arbors with a core (arbor) diameter of 23/4 inches, on the other hand, I’m getting 8.6 inches per crank. That’s more than 500 percent faster.

The difference is hugely significant because flyfishermen constantly strip off long lengths of slack line for casting, then reel it up again while playing a fish or when moving to a different spot. What used to be a frequent, aggravating chore has suddenly been made very easy by the simple expedient of a large arbor. Other advantages include bigger coils of line coming off the reel, which allow easier casting with fewer tangles. Also, drags are more consistent because as a fish pulls out line, the effective spool diameter remains nearly constant.

Shop Carefully
Some large-arbor trout models have been designed as trout reels from the ground up; others are downsized versions of larger saltwater models. This can pose a couple of problems. First, trout anglers don’t need a powerful saltwater drag, but they do need one that’s impeccably smooth and with a wide adjustment range at light settings to protect fine leader tippets. The Ross Evolution, Orvis Battenkill, and Bauer MacKenzie are examples of light, elegant large-arbor trout reels suited for light-leader fishing.

Second, reels with fresh- and saltwater origins can contrast greatly in their overall weight. For instance, the Orvis Vortex reel is a superb large-arbor saltwater design, which the company has also shrunk down to a 5/6-line-size reel that hits a hefty 9.6 ounces. The Orvis Battenkill Large Arbor III, built from the start as a trout reel for similar line sizes, weighs only 5 1/4 ounces. The heavier reel would be great on a bonefish flat, but putting one on a light trout rod would be like towing a pontoon boat with a Ferrari. In general, a satisfactory large-arbor reel for 5-weight trout rods-a common yardstick-will be in the 4- to 6-ounce range with an overall diameter of 3 1/4 to 3 1/2 inches, and with a capacity of 75 to 125 yards of 20-pound-test Dacron backing plus fly line. You’ll see some variation on both sides of those specs, but that’s enough to start you shopping. Which is exactly what I’m doing myself. After some 30 years of service, my lovely traditional British reels are going on the shelf. It’s large-arbor time.