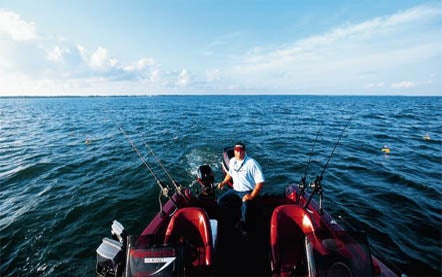 If trolling for walleyes were as simple as dragging a lure behind a boat, we wouldn’t have many walleyes left. In fact, successful trolling is a highly nuanced tactic that is often done improperly. Here are seven tips for better execution:

(1) Heed the Speed
Note your exact speed when you first get a fish. Guides and tournament pros will tell you that a change of as little as a tenth of a mile per hour can affect your hookup rate, especially in cold water when walleyes are least active.

(2) Mark the Depth
The key factor influencing lure depth is the amount of line you have out. Line-counter reels are the easiest (and most expensive) option for keeping track of this. Cheaper alternatives include marking the line on a standard reel with a laundry pen or half-hitching a rubber band onto the line.

(3) Run Two Boards
Learning to detect strikes when using planer boards is an acquired skill. To make it easier, run a pair of boards side by side. When one acts differently than its mate, it usually indicates a bite.

(4) Run a High Line
Electronics often fail to detect fish that are suspended over deep water. To catch these walleyes, run a separate planer board dragging a bait just a few feet under the surface.

(5) Mix It Up
Interrupting the steady action of a trolling rod will often trigger a strike from a following, curious fish. Pump the rod, shake it, and let the bait drift back. Then give three steady pulls, and be ready.

(6) Exploit the Bite **
It’s fine to start trolling with a specific plan or pattern in mind, but if you pick up a fish or two in a particular spot, mark the location on a GPS and immediately revisit it before the fish move on or the bite turns off. **(7) Work the Crowd
On popular waters, a cluster of boats usually indicates a hot bite, which may tempt you to join the fray with a jigging rod. Instead, troll on the outskirts of the armada, as packs of boats often displace fish to their fringes.