The best worm hooks for catching - and releasing. 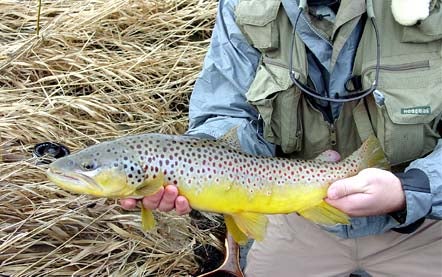 Oddly enough, the simplest form of early-season trout fishing, dunking a worm, can pose the most complex question: What hook do I use? That’s especially true in this era of catch-and-release, when you might want to keep a few trout for dinner and return the rest to the water. Your choice of hook and how you fish it are central to the issue of releasing worm-caught trout alive.

The Basics
The best way to rig a live worm is with most of the hook buried in the worm’s center portion and with the ends of the worm dangling freely. This is more natural looking than a wadded-up gob of nightcrawler. So-called bait-holder hooks have small barbs on the shank to keep the worm from sliding down and bunching up in the bend. This style is by far the best choice for standard worming.

Be sure to match both hook and worm proportions to the trout you expect to catch. A big nightcrawler belongs on a size 2 or 4 hook and is best for targeting larger brown trout. For most trout fishing, sizes 6 or 8 work best with dillies (small nightcrawlers) or small garden worms. Stay away from hooks with heavy snells; instead tie a hook directly to your fine line or leader. Some excellent choices include the classic Eagle Claw 181, VMC’s model 7292 bait-holder, and Gamakatsu’s bait-holder.

But here’s the rub. Most trout caught by this conventional rigging style are going to be fatally hooked in the gut. That’s fine as long as you’re killing fish to take home. If you want to release small trout in hopes of getting a big one or if you want to keep fishing without killing a limit, then you’ve got a problem.

One solution, which works with the conventional hooks, is to fish actively. That means drifting your worm along the bottom and setting the hook immediately at the first tap or darting of the line. Most trout grab the live bait hard and gulp it quickly; you’ve got no more than a couple of seconds to make a hookset before the whole rig is deep in the fish’s throat. You’ll sometimes miss a fish by striking too fast, but you should manage to hook most trout in the jaw.

Circle Hooks
The other option is to use circle hooks. These are an improvement, although I’ve found that they’re by no means perfect.

These oddly shaped hooks have a wide, circular bend, and the point angles up toward the shank instead of aiming straight ahead. In theory, the curved point will slide out of a fish’s gut and catch in the fish’s jaw as the hook starts to rotate out of the mouth. Circle hooks have been the subject of some extravagant reports. Many have claimed to achieve 100 percent jaw hookups when fishing with bait.

Over the past two seasons, I tested various circle-hook sizes and styles in worm fishing for stream trout. If I allowed the fish time to swallow the bait, about 50 percent of the trout were jaw-hooked. The remaining fish were gut-hooked even though I followed the manufacturers’ directions carefully-making no hard hooksets and letting the pulling fish hook themselves. Granted, these were small-stream trout, and my testing extended over a few dozen rather than several hundred fish. Circle hooks, I found, were a big improvement over standard bait hooks in terms of reduced gut-hooking, but they aren’t as fail-safe as I’d been told.

In any case, circle hooks will allow you to release more-but not all-worm-caught trout unharmed. Be sure to use non-offset circle hooks rather than those with the point bent to the side. The most successful model I’ve used so far in worm fishing is a size 6 Eagle Claw L702, a non-offset light-wire hook that’s worked well for small-stream trout. For larger trout or larger baits, go up to size 2. If you’re among the many who like to prop a rod on a forked stick at the edge of a trout pool, circle hooks are a great choice. Because you’re not holding the rod and can’t make a quick hookset, most trout will completely swallow your worrm. Using a circle hook means that at least half of those fish will still be jaw-hooked and can be released if you like, which is a huge improvement over conventional hooks.