Fun. Easy. Versatile. What more do you want in a bait? 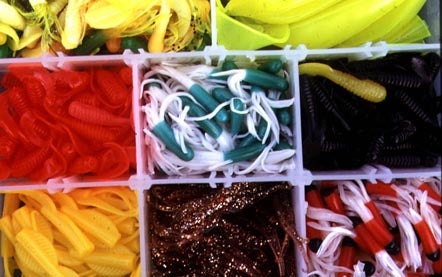 Spring bass fishing can be exciting with just about any lure. But according to veteran Texas bass pro Jay Yelas, you can get the best thrills when you tie on a weightless worm.

“It’s a fun bait to fish, because unlike with a crankbait or a Carolina-rigged lizard, you can actually see the fish swim up and eat it,” Yelas says. “Anybody can fish it, even a rank beginner, and it’ll catch bass in water temperatures ranging from 60 to 75 degrees.”

Yelas fishes his weightless worms-also called trick, floating, or wacky worms-on a 61/2-foot medium-action spinning outfit with 10-pound-test fluorocarbon line. The combination is perfect for skipping the bait under overhanging cover. He typically opts for a 6- to 8-inch straight-tail worm, which he says exhibits more erratic movements than a ribbon-tail when twitched.

**Color and Rigging **
“Color is a huge part of the equation,” Yelas says. “I normally use hot colors, like bubblegum, traffic-sign yellow, and white-all of which can provoke awesome reaction strikes. But when bass are especially wary, I’ll switch to natural colors, like watermelon and pumpkin. If you see a bass approach your worm, then turn away, the color is too bright.”

Most of the time, Yelas rigs his weightless worms Texas-style. You can also hook them through the nose or sideways through the egg sac so that the head and tail dangle freely (the latter is known as wacky-style). By varying the hook size, you can make the worm sink faster or slower to match the mood and depth of the fish.

Where to Cast
No matter how you rig them, these worms are deadly around shallow shoreline cover, such as stumps, laydown trees, and patchy grass. Cast right to the cover, not past it. Casts aimed directly at your target are often rewarded with an immediate strike. If they aren’t, let the worm sink until it’s almost out of sight, then gently twitch your rod tip to make the worm shoot sideways. “Don’t overfish it,” Yelas cautions. “If you don’t get a rise out of a bass after a couple of twitches, reel the worm back in quickly and try another piece of cover.”

Often, casting to tight spots in the cover requires a skipping presentation, which Yelas has perfected. (He caught 12 bass to my one on a recent outing when I was using a conventional overhand delivery.)

“It’s just like skipping a stone across a creek,” he says. “You use a sidearm cast, and you want the worm to smack the water in front of you with enough force that it skitters across the surface. This keeps it low so it’ll scoot under overhanging tree branches and flooded bushes. Skip it way back in there, where you’d never reach with an overhand cast-that’s where the big boys live.”

Line twist can be a major problem when fishing weightless worms. Yelas minimizes this by filling his reel only two-thirds full, which keeps the fluorocarbon line from popping off the spool in coils. “You also have to rig the worm perfectly straight; otherwise it’ll roll completely over when you twitch it-a major cause of line twist.”

Yelas points out one more important detail: “Worms often develop a problematic bend in the package. To remove it, take several worms out in the morning and lay them straight on your boat’s deck-the sun will heat them up enough to get the kinks out. Then you’ll be ready to catch fish.”