How to make an in-line spinner work for you. 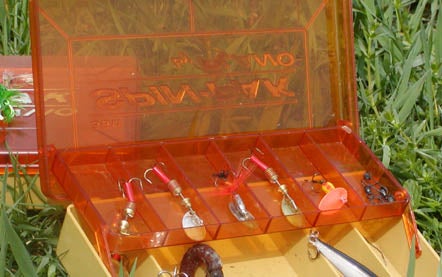 You can toss a little spinner any which way into a favorite trout river, but only with uncertain results, sort of like eating a jelly doughnut in the dark. It’s far better to plan ahead by matching your spinner type, size, and color to the water you’re fishing. Then follow the one essential rule in spinner fishing for stream trout: Cast upstream.

**Against the Flow **
Small in-line spinners like Mepps, Panther Martins, or Roostertails are probably the most popular trout lures worldwide. They’re much less expensive than minnow-style plugs, and they’re much easier to fish successfully than small spoons. However, they do have one drawback: A spinner in motion resembles nothing in nature, which means that the longer a trout gets to look at one, the less likely a strike becomes.

Success most often depends on your ability to draw slashing, reaction-style strikes from trout, the kind of hits that come when the fish has only a glance at the lure. Casting upstream and retrieving the spinner back quickly with the current gives the fish the briefest of looks and will therefore boost your score. If you cast downstream and let the lure hang in the current as many fishermen do, you’re giving the fish a longer look-and that means fewer strikes.

Faster water is better, too, especially if you’re trying to catch trout made wary by constant fishing pressure. Working upstream through the tumbling pocket water and fast runs between pools is often more productive than fishing the pools themselves. Toss your spinner upstream beyond a promising boulder, for example, and retrieve just fast enough to spin the blade as it sweeps past the edge of the rock. As you first try this technique, the lure will seem to be moving too fast downstream. Just remember that trout are much quicker than you, and very well adapted to nailing bits of food from the swiftest of flows.

Design and Color
Matching your spinner design to the water is helpful. Those with short, rounded blades like the Mepps Aglia tend to run best at shallow to moderate depths. Panther Martin¿¿¿style spinners typically run a little deeper. Roostertails, C.P. Swings, and others with long, narrow blades usually run deeper still. Ideally, you’ll be changing styles as you move upstream to keep your lure running as deeply as possible without hanging up.

You might start with a Roostertail, for example, in the deep, fast chute at the head of a pool, and then switch to a Panther Martin for the bouldered pocket water farther upstream. The shallow tailout of the next upstream pool, meanwhile, calls for a shallower-running Aglia.

Match weight to the water. I routinely throw 1/32- to 1/8-ounce spinners on 4-pound-test in small backcountry creeks in the remote New York Adirondacks. Big water, like the deep brush-lined runs of Montana’s Jefferson River, can require 1/8- to 1/4-ounce versions fished on 8-pound line.

Blade color is another variable (although there are myriad body colors available as well). Silver has an edge on overcast days or along a shaded bank in clear water. Gold works a little better in bright sun or in darkly stained water. Try chartreuse or all-black in turbid water and also during the hours of dawn and dusk; in low-light conditions, they’re the most visible.

That said, and because there are still a few trout that don’t read Field & Stream, there are times when I fish the same gold or silver blade all day. That’s partly because I’m lazy and partly because it usually keeps getting trout to strike as long as I’m fishing upstream. Working against the current is the critical part of spinner fishing. Everything else is an argument.