Catch the world-record bass and win $50,000 in cash and prizes. Catch a state line-class record and win fame and glory. 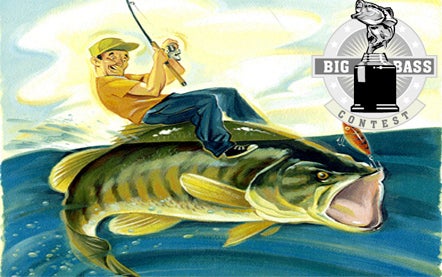 Our accountants think this is the worst possible time to offer big prizes for anyone who catches the world-record largemouth bass, but we think the timing is perfect. Chances are good that this is finally the year when George Perry’s 71-year-old record of 22 pounds 4 ounces will fall. Last May a fish was caught in California’s Dixon Lake that was only 9 ounces short of the mark, and lakes all across the country are filled with big bass, a result of widespread stocking of Florida-strain largemouths and a growing catch-and-release ethic. Most bass fishing experts agree that the current record’s days are numbered.

Field & Stream is no stranger to fishing contests; the magazine started one in 1910, and it ran without interruption until 1954. In that year there were 315 awards totaling $8,125. The contest was run by Mary Ball, whose byline was given as “Mike” Ball, because in the 1950s it wasn’t considered proper for a woman to run something as macho as a fishing contest.

We figure we’ve been out of the contest business for too long, so we’re getting back in it with a simple proposal: You break the world largemouth bass record, and we give you $15,000, a Ranger boat, and a Yamaha outboard. That’s a little better than the $75 we paid to George Perry for his 1932 catch.

Fishermen whose catches fall short of the world record can still win acclaim. If you break or fill a vacant International Game Fish Association state line-class record for largemouth bass, we’ll send you a certificate for your accomplishment and run your name (and maybe your photo) in the magazine.

The rules are straightforward. All fish must be caught between March 1 and June 30 of 2004, and all catches must be certified by the IGFA. For the details, see below. If you catch a potential record, you must submit an application to the IGFA within 30 days. Applications are available online at www.igfa.org or by calling 954-927-2628.

The following pages will teach you everything you need to know to catch the bass of a lifetime: where to find the best trophy waters in your state; how to fish big-bass cover and structure; the baits that giant fish can’t ignore; and the one lake that may be the best place to break the record. Read on, then go out and make history.

( 2 ) The contest is open only to legal residents of the 50 United States and the District of Columbia. Contestants must be ten (10) years of age or older prior to March 1, 2004, to be eligible. In the event a valid winner is a minor contestant, his/her prize will be awarded to parent or legal guardian. For the purposes of these rules, the terms contestant and Grand Prize Winner shall mean the parent or legal guardian of a minor contestant or Grand Prize Winner.

( 3 ) All claims will be for largemouth bass (Micropterus salmoides) caught within continental United States waters.

( 4 ) The International Game Fish Association (IGFA) will serve as the final determiner of any new world record. The IGFA is domiciled at 300 Gulf Stream Way, Dania Beach, FL 33004.

**( 5 ) **All fish must be caught in accordance to IGFA rules. These rules are available at www.igfa.org/rulebook. It is the sole responsibility of the contestant to submit an application to the IGFA within 30 days of the catch, provided said catch took place within the specified dates.

**( 6 ) **The fish must be caught using a hook and line, and caught in its natural habitat.

( 7 ) All-Tackle world records are kept for the heaviest fish caught by an angler in any line class up to 130 lb (60 kg). Fish caught on lines designed to test over the 130 lb (60 kg) ass will not be considered for record claims.

( 8 ) In order to qualify for a world record, a catch must outweigh the existing record by two (2) ounces.

( 9 ) No applications will be accepted for fish caught in hatchery waters or sanctuaries. The catch must not be at variance with any laws or regulations governing the species or the waters in which it was caught.

( 10 ) Any application fees required by the IGFA will be the responsibility of the contestant.

( 11 ) Contestants must be properly licensed to fish in the state in which the fish was caught.

( 12 ) Original photographs are required of the catch. A clear picture of the side view of the entire fish is mandatory for proper species identification.

( 13 ) The fish must be identifiable based on original photographs and other supportive data submitted with the application.

( 14 ) Any potential claims must be submitted by the contestant and must pass a formal examination by a qualified authority recognized by the IGFA. The contest Sponsor is not responsible for any fees or associated expenses for the examination by said authority.

( 15 ) The scales used for the purposes of weighing the fish may be subject to testing and may be submitted to state and IGFA agents for verification purposes at the request of the IGFA.

( 16 ) There will be only one Grand Prize Winner, issued for the first World Record (as defined by the IGFA) set between March 1, 2004, and June 30, 2004. Contest winnings will not be issued unless and until the IGFA has determined a new record. If the IGFA cannot confirm that a new record has been established, then a Grand Prize will not be awarded.

( 17 ) The total Grand Prize package is estimated at $49,725, comprising $15,000 cash, a Ranger Boat Model 185VS valued at approximately $24,495, and a Yamaha V MAX outboard model V150TLRC valued at approximately $10,230. With the exception of the $15,000 cash prize, Sponsor reserves the right to substitute prizes of equal or higher value in the event of unavailability. Except for the cash prize, no other prizes are redeemable for cash or transferable.

**( 18 ) **Unless otherwise prohibited by law, the Grand Prize Winner must sign a Winner’s Affidavit and a Publicity and Liability Release form before the Grand Prize can be awarded. Winner’s Affidavit and Publicity and Liability Release form must be signed, notarized, and returned within 14 days of notification or prize will be forfeited.

( 19 ) After receipt of completed and signed documentation, the IGFA or a designated independent judging organization may conduct an investigation including, but not limited to: Winner, Witness, and Contest Officials who must submit to and pass in a conclusive manner, a polygraph examination as a condition precedent to claim consideration, if, in Sponsor’s opinion, such action is warranted.

( 20 ) Expense of polygraph will be that of the Sponsor.

( 21 ) Contest winner relinquishes all rights to Field & Stream to utilize their name, their likeness, any pictures, articles, film, or other marketing material without further compensation other than original contest winnings unless otherwise provided by law.

( 22 ) Contestants may not be employees of the Sponsor or any promotional or advertising agency involved with this promotion or a member of any family or agent of the contest officials or any of the above.

( 23 ) Field & Stream will not be liable for any injury, damage, or other losses sustained to or caused by participating anglers.

( 24 ) Each winner, if any, is responsible for paying any and all taxes on any prize(s) won and must authorize the deduction of such taxes, if any, from the prize(s) to the extent required by law.

**( 25 ) **This contest is sponsored by Time4 Outdoors d/b/a Field & Stream; a division of Time4 Media, Inc., 2 Park Avenue, NY, NY 10016, and any entries and applications submitted to the IGFA for the purpose of this contest will become the property of Field & Stream.

**( 25 ) **This contest is sponsored by Time4 Outdoors d/b/a Field & Stream; a division of Time4 Media, Inc., 2 Park Avenue, NY, NY 10016, and any entries and applications submitted to the IGFA for the purpose of this contest will become the property of Field & Stream.