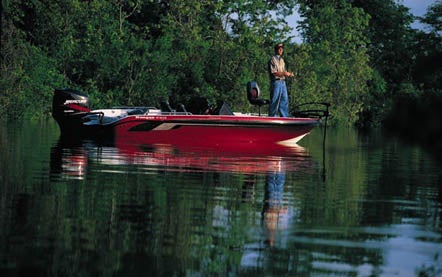 Summer bass commonly retreat to depths of 15 feet or more. When they do, big-billed crankbaits get down to them and spark reflex strikes. But these lures can require too much work. Virginian Woo Daves, the 2000 BASS Masters Classic champion, dredges up bass with a lot less effort. He switches to heavy spinnerbaits weighing as much as 21/2 ounces, which cast far, run deep, retrieve easily, and catch the same bass that respond to crankbaits.

“Most people can’t pull big crankbaits for long,” says Daves. “It’s too much work. A big spinnerbait doesn’t have that heavy drag. You can fish it all day with no problem.”

Although heavy spinnerbaits can take bass from depths of 25 feet or more, Daves usually retrieves them at 12 to 18 feet deep. Retrieved slowly, a 3/4- or 1-ounce spinnerbait will run in this depth range. But given the warmer water temperatures of summer, bass tend to be fairly active and show little interest in laggardly retrieves.

“A heavier spinnerbait lets you get deep and fish at a faster pace,” says Daves. “Speed is what triggers strikes from these bass.”

At a depth of, say, 15 feet, a 2-ounce spinnerbait zips along much faster than a 1-ouncer. Daves experiments with different sizes until he determines which one runs at the speed bass prefer. He favors the Ledgebuster brand of spinnerbait with a single No. 5 willowleaf blade. Another favorite is a tandem spinnerbait rigged with a small Colorado blade leading the willowleaf.

After making a long cast, Daves lets the lure sink. He may wait until it touches bottom, or count it down to the desired depth. To start the blades turning, he sweeps the rod at the outset of the retrieve.

“I cast heavy spinnerbaits to the same places I fish crankbaits,” he says. “I run them over points, creek and river channel ledges, and also along the deep edges of grasslines.”

Daves also slings them in strong currents, like the tailraces of dams and in river systems. In these situations, his target species is often trophy smallmouth bass. He casts quartering upstream and lets the spinnerbait sink to the bottom. Then he retrieves it just fast enough to keep the blade turning as the current sweeps the lure downstream.

“I use a heavy-action, 7-foot baitcasting rod and 17-pound Stren line. I like fluorocarbon line because it sinks,” Daves says. He matches the rod with a 6:1 gear ratio baitcasting reel when he fishes in moving water; a fast retrieve helps him stay ahead of the current. In lakes, however, he may switch to a 5:1 gear ratio for more control.

“Don’t be afraid to try heavy spinnerbaits,” says Daves. “Fishing these lures for summer bass is no sweat.”