Cut through the timber with an effective casting plan. 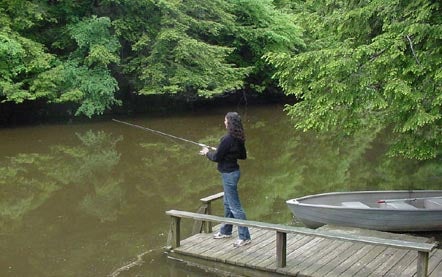 Standing timber often looks so fishy, you’ll suffer the delusion that every tree holds a bass. I myself was a bit overwhelmed when I first set eyes on the flooded forests in Missouri’s Truman Lake during a spring outing-so many trees, so little time. I knew, though, that only a small percentage of them would yield strikes. A successful outing depended upon some clear-headed logic.

Given the time of year, the prespawn bass would be heading for the shallows, so I eliminated trees standing in water deeper than about 6 feet. To narrow my search further, I concentrated on those in protected areas of creek arms where bass would be looking to spawn.

The water temperature was in the 60s, and the bass were active enough to respond to a spinnerbait. This allowed me to cover ground quickly. I opted for a chartreuse-and-white 1/2-ounce tandem model with gold Colorado blades. The bright color and round, throbbing blades would help bass pinpoint the lure in the stained water. Soon I located bass snuggled against fallen logs and limbs in 2 to 4 feet of water near chunk-rock banks and switched to a shallow-running crankbait that swam right at their depth.

It’s not as complicated as it sounds. Trees create a number of variables, but there’s a solution to every one.

After the Spawn
At Truman, the bass were fairly easy to find because they were tight against cover close to the bank. The task is more challenging later in the season when bass scatter through a wide stand of timber. You can’t cast to every tree, so don’t waste time trying.

Concentrate on targets bass can lounge beneath, such as leaning trunks, fallen logs, outreached limbs, and gnarled roots. Cedar trees and other branchy species attract bass because they provide more cover and shade.

How deep bass hold in standing timber often correlates to the depth of the baitfish, except during the spawn. If you see shad riffling the surface, go shallow. Should your depthfinder reveal baitfish suspended 12 feet deep, that’s where the bass will be.

Plan Your Casts
Flooded timber is often a maze that will draw you into bad spots and weird angles for casting. Pick several bass targets at once, then work them, cast by cast, mindful of your position. “Fishing standing timber is like shooting pool,” says 2000 Bassmaster Classic winner Woo Daves. “Just as you have to think several shots ahead when you play nine-ball, you have to think ahead when casting in timber.”

Daves uses his trolling motor to get into position for the best angle to cast beyond the cover. He works the lure into the shadows and parallel to logs and limbs to ensure that any bass holding there will see it.

Check the Forest Floor
Bottom changes frequently determine which trees hold bass. Points, humps, creek channel bends, and other structures are just as attractive to bass in standing timber as they are when no trees are present. You can look for clues on your depthfinder to find these formations.

Creek channels cut winding boat lanes through the trees. A point of trees often reveals a point beneath the surface. Fish these structures, and the trees that adorn them, with crankbaits, Texas-rigged plastic worms, jigs, and Carolina rigs.

When he finds lots of limbs and windfalls beneath timber, Daves favors Bagley Kill’r B2 crankbaits, which dive from 5 to 12 feet. If these buoyant balsa lures run into a limb, you simply pause the retrieve, and they quickly float out of the potential snag.

Probe the Deep Trees
In the summer and fall, bass sometimes take shelter around isolated trees that remain standing in deep water. A tree rooted in a 50-foot-deep bottom may have only its crown protruding through the surface. Bass will hover in the upper limbs about 10 to 20 feet deep. In clear water, you can call these bass up by working a noisy popper or proppeller bait over them.

Missouri pro Denny Brauer hoodwinks big bass suspended in deep trees by tossing a 10- or 11-inch Texas-rigged worm with a 1/4- to 1/2-ounce bullet sinker into the middle of the limbs. He lets the worm fall freely. If bass are present, one nabs the worm before it sinks very far. This tactic has worked well for Brauer in reservoirs like Truman Lake and Toledo Bend.

“The best trees stand on the edges of main river channels,” says Brauer. “I’ve caught suspended bass from 2 to 20 feet deep, but the 8- to 15-foot range is the most productive.”

One thing is for certain about hunting bass in trees: You need a serious arsenal of lures. Eventually you’ll throw just about everything in your tackle box. Come prepared.