New GPS inserts allow you to troll up walleys via satellite. 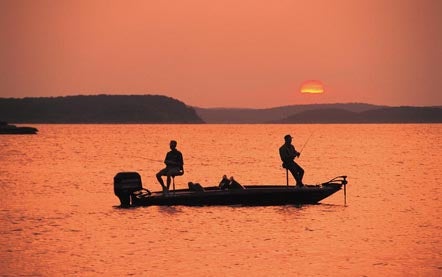 It’s a technological match made in walleye fishing heaven: thumbnail-size data cards containing the depth contours of the water you’re fishing that can be inserted into GPS units. Similar in size and design to the memory chips for digital cameras, the multimedia cards display the lake’s bottom on your GPS plotter screen. Such onboard information allows you to troll with exact precision over and around the crucial humps, points, and turns where walleyes congregate.

Drawing upon highly accurate National Oceanic and Atmospheric Administration source data, depth chips with hydrographic contours make for safe navigation as well as precise trolling. Imagine an on-screen map instead of a paper chart, with your boat’s whereabouts shown in relation to what’s underwater as well as its position on the planet. That makes it possible to take evasive maneuvers around a rock pile and to keep the boat as well as your lines exactly where you want them.

Nipping and Zooming
Where you go for a troll on big water should be a function of the details shown on a hydrographic map. Likely holding locations for walleyes are easily identifiable in the form of rock piles, points, and underwater contours that the fish travel like highways. The advantage of electronic mapping, though, is that with it you can head straight for such areas instead of wandering around looking for them, trying to match what you see on your depthfinder with the contours on a paper map.

Since Great Lakes walleyes hold off the edge of distinct humps and bumps instead of directly atop them, an excellent strategy is to set up a troll that nips off the edges and covers the gaps between underwater promontories, where the fish suspend to feed on baitfish.

Another method is to keep the boat trolling in a given depth-say, 25 feet-and follow the twists and turns of the contour line on a pass up to several miles long. When you catch a fish, zoom in to take note of any points on the contour, then zoom back out to see what’s ahead and whether any similar areas at the same depth are on the same contour, even if they’re miles away.

But not all the humps and points are obvious. When the prevailing depth remains similar, perhaps at 30 feet, every once in a while you’ll notice a slight change marked not with the contour line but with numbers-27 feet, for instance. Though the slight rise is not enough to warrant a full-fledged hump on the electronic map, the negligible change in depth is worth a deviation in your trolling pass to pull across it.

Who Makes Them
Bottom Line, Humminbird, and Si-Tex are among the GPS brands that take cards made by C-Map (508-477-8010; www.c-map.com). Some chips embrace wide swaths of water, including much of the Great Lakes. The cards cost from $99 to $199. Specifics are included on C-Map’s website.

Among the options on Navionics (800-848-5896; www.navionics.com) chips are NOAA charts of portions of the Great Lakes and some connecting waters enhanced with a company database that allows you to zoom without overlapping text and encountering blank spaces. Also available are electronic versions of fishing hotspot maps, called HotMaps, for 14 regions ($129 each), including a wide variety of waters. You can see if your favorite lake is one of them on the Navionics website. Their maps can be used with Furuno, Lowrance, Raymarine, Si-Tex, and other units.

According to tech support at Lowrance, set the update rate of the GPS unit at its fastest, once per second, to yield the most frequent information from the satellites. When trolling, you want to achieve the closest thing to instant update in order to get the most accurate readings of your position and make corrections without delay. The technology has never been so good, and the walleyes have never been so nervous.