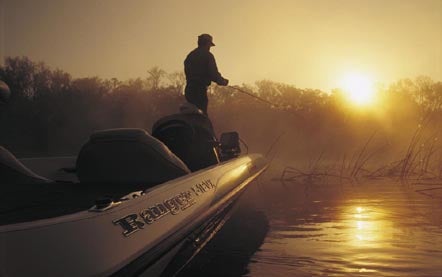 They look like little cloud shadows on the water, but they’re really bright spots for fall bass fishermen. Those dark blotches that appear in the shallows of reservoirs and large rivers (in September and October in the northern section of largemouth range, and from October to December in the south) are tight little schools-balls-of shad. Bass follow them up from deep water like wolves after a herd of sheep.

I had the action all to myself one October when I ventured onto a 4-acre flat off a tributary of the Ohio River. The deepest part was no more than 3 feet. I plucked more than a dozen good-size largemouths from that flat, some of which were feeding in less than 12 inches of water.

I generally maintain a steady retrieve that keeps the nose of the bait barely nudging the bottom. The mud trail and the sound of the rattling bait scraping bottom seems to incite bass to bite. I hold the rod high to keep the bait up in depths of less than 1 foot, and drop the rod low in deeper water. Lipless rattlers heavier than 1/4 ounce sink too quickly and plow the bottom too deeply to be effective here.

Fairly heavy line-15- to 17-pound monofilament-decreases the sink rate and allows for slower retrieves. Even so, I prefer a high-speed baitcasting reel to maintain better control over the lure and the bass. A 6-foot 6-inch medium-action fiberglass baitcasting rod casts long and accurately and is more forgiving than a quick graphite rod when bass jump in an effort to shake the hooks.

How to Find a Flat
I’ve had my best luck fishing flats in the backwaters of big river systems and the upriver sections of large reservoirs, but I sometimes find productive flats in the backs of pockets off main lake sections. The key is to find flats that have stained water with a visibility of 3 to 12 inches. Avoid water that’s clearer than that, as well as water so stained that it’s opaque.

The most productive flats feature a creek channel that may be only 3 to 4 feet deep. Bass follow these migration routes into the shallows.

[NEXT “The Approach”] **The Approach **
Begin fishing a flat by easing your boat down the middle of the channel with an electric motor. Monitor your depthfinder closely to follow the channel’s twists and turns.

Work toward the back of the flat, casting ahead to the left and right, retrieving your crankbait over the edges of the channel on either side of the boat. Bass frequently hang on the lips of channels, especially channels lined with stumps, which appear as dark shadows beneath the surface. Run your crankbait past a stump from several angles, and always fish it with a jig or worm before moving on.

After following the creek channel to its source (or to where it has silted in), move up onto the flat and fish from one piece of cover to another. Check all areas of the flat that are reachable by your boat. When you see a ball of shad, cast the crankbait beyond the baitfish and retrieve the lure along the bottom beneath it. Another productive tactic is to cast a Texas-rigged 4-inch plastic worm with a 1/16-ounce bullet sinker past the ball of shad. Then swim the worm along the bottom and lift it into the baitfish, scattering them. Any bass in the vicinity will nab the worm as it sinks. A worm in a dark color, such as junebug, works well for this.

Fish fast and cover the water. If you catch several bass, keep making passes. One good flat may keep you busy all day. Should a flat prove stingy, move to another.

Warm, sunny afternooons pull the shad up where they can easily be seen rippling and popping the surface, and bass go on the prowl. But if you see little or no shad activity on the flat, fish it anyway. If the shad are there, the bass will be, too.