Make backlash a thing of the past with these simple tricks. 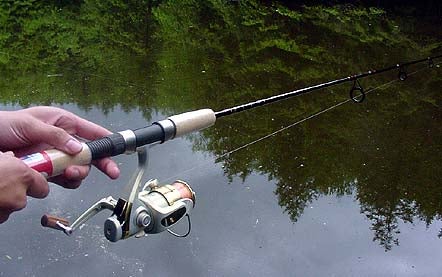 Baitcasting reels are hugely appealing and intimidating at the same time. Freshwater versions will handle heavier line and bigger fish than comparable spinning reels, and many of the new designs are just plain sexy and cool. But baitcasters can backlash in casting, which puts off many beginners and gives even practiced hands occasional fits.

Reel makers have become increasingly clever lately in designing their products with antibacklash controls, but even the best of the new gizmos won’t help unless you set your reel up correctly in the first place. Making a baitcaster backlash-free is easy, even for a beginner, with one simple adjustment.

**BASIC SETTINGS **
On the side of your reel, under the handle and next to the drag adjustment, is a small, round knob. This is the spool-tension control, sometimes called a cast-control knob. It’s analogous to the hand brake on your car. I’ve never seen a baitcaster without one, and this knob is key to your initial success.

Most manufacturers instruct you to tie a casting weight or lure-say, 3/8 ounce-to the end of your line and to then tighten the cast-control knob enough so that the lure will slowly descend to the ground when the reel is placed in free spool. Trouble is, this setting is too light for most beginners. So tighten the knob another half-turn or so before you attempt a cast.

Don’t try to thumb or otherwise control the reel spool. Just make a gentle overhead cast. If the reel backlashes, untangle it and tighten the control knob a little more. After a very few casts and adjustments of the control knob, you’ll be able to make short casts without using your thumb on the spool and without any backlashes. Your casts will be short, but at least you’re getting started.

As you continue practicing, very gradually loosen the control knob between casts and start using very gentle thumb pressure to control the spool. Most beginners will start achieving fishable casts within 20 or 30 minutes by this route, while avoiding the tangles that defeat so many novices. Very quickly, you’ll be ready to use the subtler effects of your reel’s other cast controls.

[NEXT “MORE CONTROLS”] MORE CONTROLS
Practiced baitcasters often leave the cast-control knob nearly or even fully off (adjusting it so that the reel spool has just barely perceptible side play). This lets the spool spin at maximum efficiency (for greater distance) in casting. The reel’s centrifugal brakes or magnetic cast control still help guard against backlash. Some models have both of these.

Centrifugal brakes are plastic weights that are forced outward against a circular rim as the spool spins. The faster the spin, the harder the weights push outward to brake the spool. Lighter lures require more casting force and therefore require either larger brake blocks or a greater number of them set to an “on” position.

Magnetic systems work on a principle called Lenz’s law, which simply means that the spinning of your aluminum spool is retarded by a magnetic field. To control this setting, a set of magnets inside the reel is moved closer to or away from the reel spool via an external knob. Unlike centrifugal brakes, the magnetic effect, once set, is constant regardless of spool speed. Many top casters-until lately-have preferred centrifugal systems for that reason.

Very recently, some backlash controls have changed radically for the better. Shimano’s Calcutta DC reels have a continuously variable electromagnet inside the spool to control backlash. That reel’s spool generates electricity as it spins, which in turn powers a small circuit board that senses spool speed and adjusts accordingly during the cast. It is definitely not a beginner’s reel, though.

Novices should look at Abu Garcia’s new D6 baitcaster series, in which conventional centrifugal and magnetic brakes have been combined with a single external control knob.

Daiwa, meanwhile, has a nifty new magnetic system called Magforce-Z that features an internal metal cup that moves closer to or away from a set of magnets during the cast according to spool speed. The feature will appear this spring on several new Daiwa models.