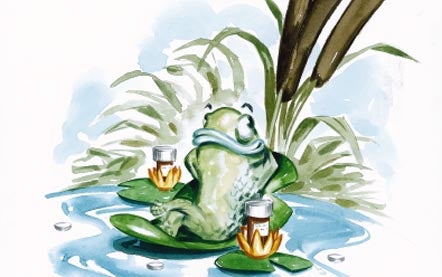 When a group of baylor university scientists publicized the discovery of the presence of Prozac, the antidepressant, in bluegills near a Texas water treatment plant in 2003, reporters couldn’t resist a few wisecracks: “Can fish just say no?” “Forget the aspirin, just drink the water.” And “Maybe that’s why Mr. Bush spends so much time at his Texas ranch.”

But subsequent findings this fall were sobering: The Baylor team found fluoxetine-the active ingredient in Prozac-in the muscles, livers, and brains of channel catfish and black crappies, as well as other aquatic creatures such as caddisflies and damselfly larvae. The study is believed to be the first to prove that antidepressants, which likely entered the water in urine or from pills that were flushed down the toilet, can accumulate inside the tissue of fish and aquatic invertebrates.

Bryan Brooks, a Baylor environmental studies professor with a specialty in aquatic ecology, wonders if the pharmaceuticals could impact fish mating and feeding habits. “Does this influence the fish’s ability to capture prey? Do they just become candy for largemouth bass?” Other research has raised similar questions. A 2002 U.S. Geological Survey study found that 80 percent of 139 streams tested in 30 states contained traces of a variety of pharmaceuticals.

So will an angler who eats his catch get a mood booster? “Compared to a human dose, the amount of the compounds in the fish is so small that you probably wouldn’t notice it,” Brooks says. “But it’s not totally out of the question.”